A recent World Bank study reveals global carbon revenues are rising sharply, but only around 42% are used for environmental projects. It shows European and American citizens prefer their governments to spend carbon revenues on low-carbon initiatives, so why is political will lagging behind asks Susanne Dyrbøl from Rockwool Group

Increased attention to carbon pricing from policy makers in recent months is unlikely to be coincidental. Money talks, as the saying goes. As a result of reforms, carbon prices in the European Union Emissions Trading System (ETS) have increased fivefold in the last two years. In 2017, auctioned allowances created revenue for member states totalling €5.6 billion. Revenues for 2018 could be three times higher at around €15 to €18 billion.

The Regulatory Assistance Project has found that only 55% of EU ETS revenue is reported by EU member states as being used for climate and energy-related purposes. The low figure is cause for concern given the scale of the challenge and its veracity needs to be treated with caution. Countries are encouraged, not required, to invest a minimum of 50% of their revenue in climate-related initiatives. When reporting against this request, governments are required to supply evidence of equivalent spend rather than detail the use of actual revenues. This means some national reports simply list existing policies, investment in which adds up to, or in some cases exceeds, the revenue received. This is troubling because new revenue should be treated as new money and create new investments and activities which are above and beyond business as usual.

Rather than disappearing into the black box of national treasuries, carbon revenues should be used to tackle the biggest challenges to the clean energy transition. 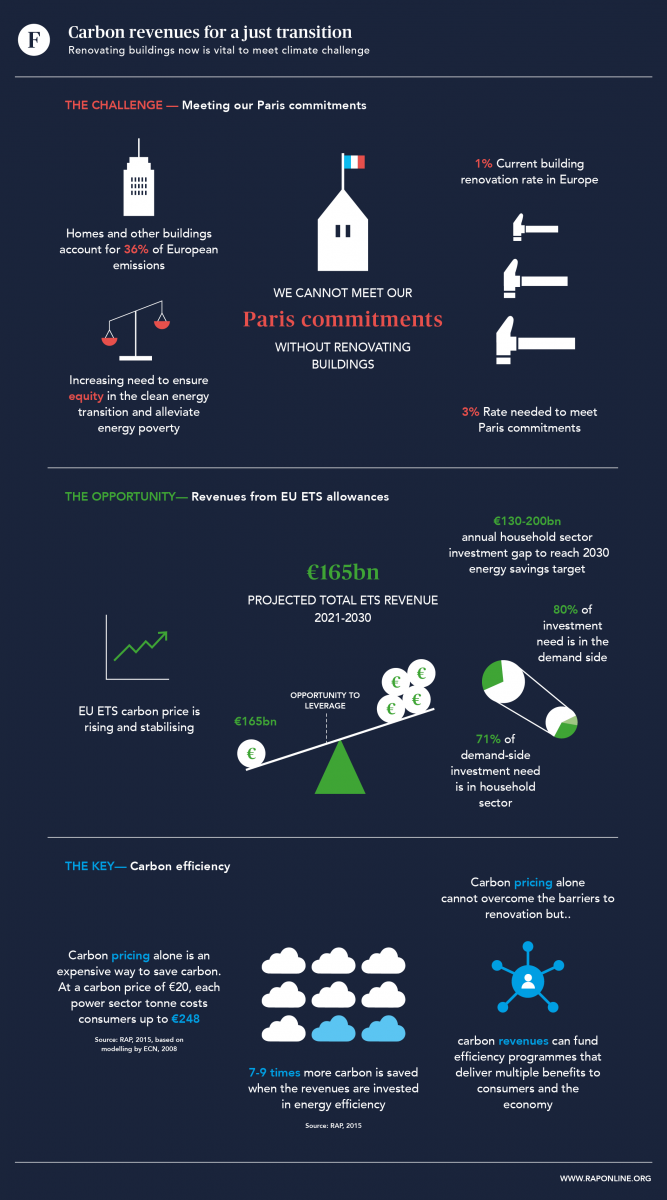 At the top of the list of challenges is reducing energy use in buildings, which account for 36% of Europe’s greenhouse gas emissions. The household sector poses the biggest challenge, requiring over half of the total clean energy investment needed to reach the EU’s 2030 energy savings target. Moreover, the investment gap for the household sector between current investment and investment needed is around €130 billion each year to 2030, meaning we have to more than double existing spending. Added to the scale of the investment challenge are the complexities of the sector and the multiple economic and non-economic barriers to renovation.

To tackle these difficulties, for the last ten years the Czech Republic has used its carbon revenues to invest in a national renovation programme — the New Green Savings Programme. Evaluations show state investment returns its full value to the treasury and creates positive GDP growth. But what really brings the value of the targeted carbon revenues to the fore is the leveraging ability of the scheme. At the relatively modest leverage rate achieved by the Czech programme, in which public funding is matched three-to-one with private spending, rising national carbon revenues could be sufficient to generate investments to fill the funding gap identified in the Czech Building Renovation Strategy for residential renovations to 2030.

Transfer this thinking to the Europe-wide ETS revenues of €16 billion a year to 2030, engage a reasonable private investment leverage of five times, and the resulting €80 billion goes a long way to plug the €130 billion funding gap for the household sector. And this is largely new money.

Another big challenge is how to ensure fairness for consumers, in particular those suffering from energy poverty.

Since 2013, France has responded by investing its ETS revenues into the Habiter Mieux programme that supports building renovations for energy poor households, recognising energy efficiency as the most effective way to alleviate energy poverty.

Encouraging noises have also come from the European Commission in its leaked draft priorities that recognise the potential for ETS revenues to tackle equity. The headline “revenues from polluters for a fair transition” proposes using newly auctioned aviation allowances to fund measures to address housing and transport poverty and boost clean business in regions negatively affected by the transition. Importantly, the document notes the need to use revenues to deliver visible benefits, which is essential to maintain public support for carbon pricing. This is particularly so for the ETS as consumers pay multiple times the market price for each tonne of carbon abated in the ETS through their energy bills, making it a very expensive way of saving carbon.

The examples from the Czech Republic and France offer inspiration but they do not represent the norm in Europe.

Poland launched its ambitious Clean Air Programme in September 2018, aimed at replacing boilers and improving insulation in single-family homes, particularly for low income households. If successful, the programme would be the largest of its kind in Europe, with an announced investment of €24 billion over ten years.

But, while this investment has been announced, it is yet to be secured in the state budget. Furthermore, the opportunity is being missed to require and fund full thermal retrofits before new boilers are installed for energy poor households. This means the programme may well support switching to more expensive fuels without reducing energy need, leading to higher costs and worsening energy poverty. Finally, the success of the programme will rely on uptake by households. As the Czech programme found, incentivising take-up of renovations depends on significant awareness raising and technical support, which needs to be financed and included in the programme design.

The ambitious budget for the Clean Air Program and the necessary investment to make the programme comprehensive could be easily covered by Poland’s ETS revenues, recently estimated at €41 billion to 2030.

Carbon revenues invested in energy efficiency have the potential to help deliver a socially fair energy transition. The public approves. We hope policy makers are listening and take up the challenge.

Do you have a thoughtful response to the opinion expressed on FORESIGHT Climate & Energy? Do you have an opinion regarding an aspect of the global energy transition you would like to share with other FORESIGHT readers? If so, please send a short pitch of 200 words and a sentence explaining why you are the right person to deliver this opinion to opinion@foresightdk.com.

Outside of reimbursing administrative costs, it seems like the only logical places for carbon revenues to go would be clean energy / climate change / environmental projects OR back to people a la the Carbon Dividend plan. 42% is definitely far too low, and is a realistic reason why people are still resisting carbon fees