EROEI typically describes energy return on energy investment, which is the ratio of the amount of usable energy (exergy) delivered from an energy source to the amount of exergy used to obtain that source.

It relates to heat engines like the one depicted below, where a boiler produces a vapor that drives a turbine, leaving spent vapor that is condensed in a condenser after which the working fluid is pumped back to the boiler to complete the cycle. 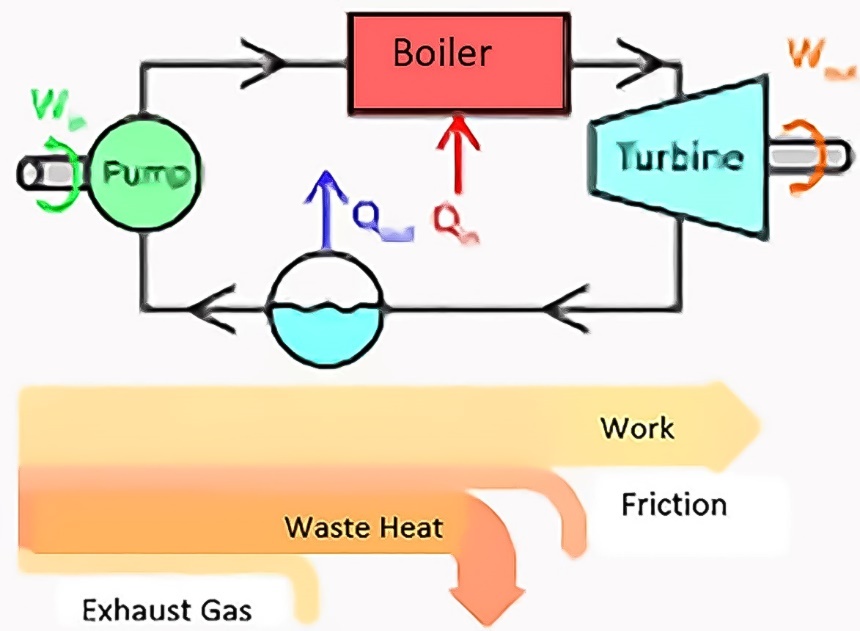 The heat engine produces work but also friction, waste heat and in the case of fossil fuels, exhaust gases that are intensifying the greenhouse effect.

The following graphic from the 2016 Forbes article EROI -- A Tool To Predict The Best Energy Mix suggests the break-even EROI for fueling modern society is about 7. 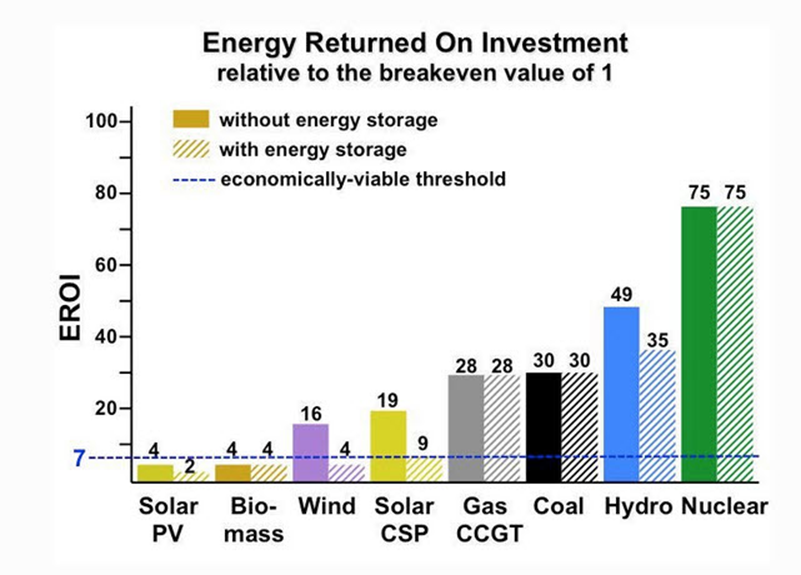 Solar PV, biomass and wind don’t reach the 7% EROI breakeven threshold when storage is included. So, these cannot fuel our needs. Even though they don’t increase waste heat or produce emissions.

Concentrated solar barely breaks even but does nothing for the environmental damage already baked into the system. Which is exacerbated by fossil fuels and nuclear power that in the latter case is only about 33-37%  efficient. So, it produces about twice as much waste heat as work.

The following graphic shows the waste heat of the peak installed nuclear capacity of 396.6 gigawatts accrued at a rate of 1% for 3,000 years. 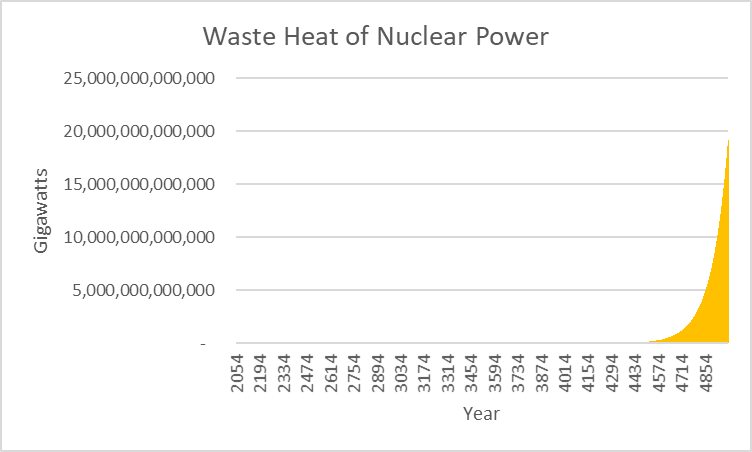 Joseph King, one of the program directors for the U.S. government’s Advanced Research Projects Agency-Energy claims waste heat is the biggest source of energy on the planet.

But in reality, it is global warming.

About 70 percent of the 18 terawatts (TW) of primary energy consumed by humanity is lost in the form of  waste heat. So, only about 5.4 TWs of actual work is being created.

Waste heat has been described as a problem of a thousand cuts, but in other circles it is claimed it isn’t a problem since it is 100 times less than the heat global warming. But if we have learned anything from the COVID epidemic, it is that exponential growth is lethal.

For years, economists have championed carbon pricing as the most economically efficient way to transition the energy sector to net zero but that simply isn’t the case.

For one thing, the EROI for carbon dioxide removal is always negative. CDR’s notional cost is $100 per ton of CO2 removed and the technologies would consume about 25% of global primary energy by 2100.

A joint NASA, NOAA study found that the Earth's Energy Imbalance (EEI) doubled between 2005 to 2019. Even as carbon dioxide concentration at the Mauna Loa Observatory only increased from 378.9 to 410.5 ppm or 7.6%.

And the paper Quantification of ocean heat uptake from changes in atmospheric O2 and CO2 composition indicates heat is the leading indicator of warming not emissions. With the result about 25% of atmospheric CO2 is the result of offgassiing as the oceans warms.

So, something else is driving the rapid doubling of the EEI, and the most likely suspect is waste heat.

If solar is marginal, other renewables don’t produce sufficient EROI, fossil fuels produce emissions and waste heat, and nuclear produces waste heat and is restricted by low water levels in rivers that are drying up, then hydropower is the last of the usual suspects. But its potential is only 2 TW and the water necessary for these plants is also drying up in many regions. Which leaves only the conversion of global warming to work as our only option.

The following chart shows how 1,660 TW of excess heat will have been added to the planetary system by 2053. 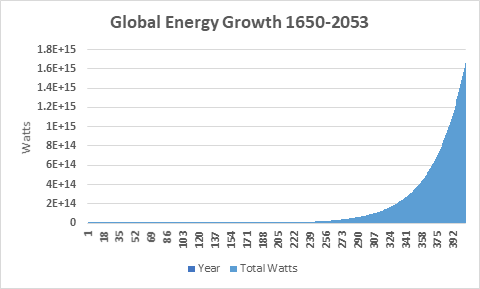 It is an extrapolation of Tom Murphy’s U.S. Energy consumption in all forms since 1650 calculation, which showed annual growth of 2.9% per year. Fit to the Resplandy et al calculation that the average global warming of the ocean between 2007-2016 was 409 TW.

The end point of this series is 2053, which is the earliest we will be able to start reversing the EEI, which is the change in the Earth’s average temperature since we started burning fossil fuels in about 1760 and started producing emissions that block a portion of the heat accumulating in the atmosphere that otherwise would escape into space.

An EEI reversal can only be accomplished by doubling the current installed ocean thermal energy conversion capacity of 100 kilowatts every year until it reaches 409 TW. By which time the annual EEI will be 1,660 TW and the total since 1650 will be 59 quadrillion watts. Or with mirrors as has been suggested by the MEER organization, which only reverses the EEI when its mirrors are pointed into space.

They can also be configured in a concentrated solar arrangement to produce power, but at the expense of atmospheric and ocean cooling.

Since Thermodynamic Geoengineering (TG) operates on a recycling interval of 226 years, the EEI of 59 quadrillion watts will be converted in 13 tranches of 261 TW per year, at a conversion rate of 7.6% with a system like Melvin Prueitt’s “Ocean Power System” to 19.8 TW. Plus another 18 TW that could be produced by a more efficient OTEC system than conventional OTEC  which is only 3% efficient, without negatively impacting the thermohaline circulation.

The EEI is an analogy for the Earth’s natural heat engine that can produce, at a minimum, 31 TW of useful energy every year for next 3,000 years per the following graphic. 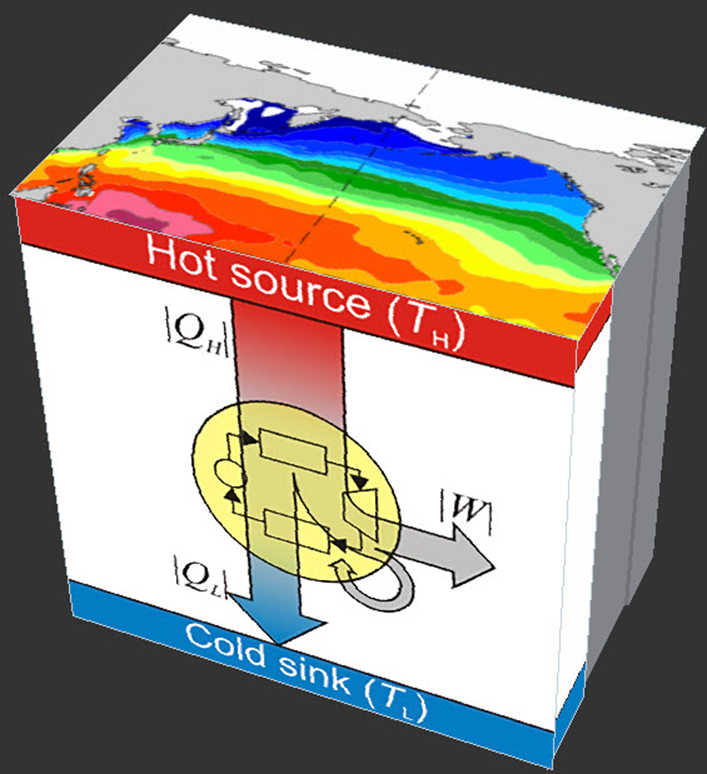 Diverting some of this heat into halting global warming would hardly make a dent in the total EEI, but the beauty of the technology is, the heat moved into the cold  ocean heat sink returns at a rate of 4 meters/day and can be recycled in 12 cycles, after the initial accumulation cycle per the following graphic. 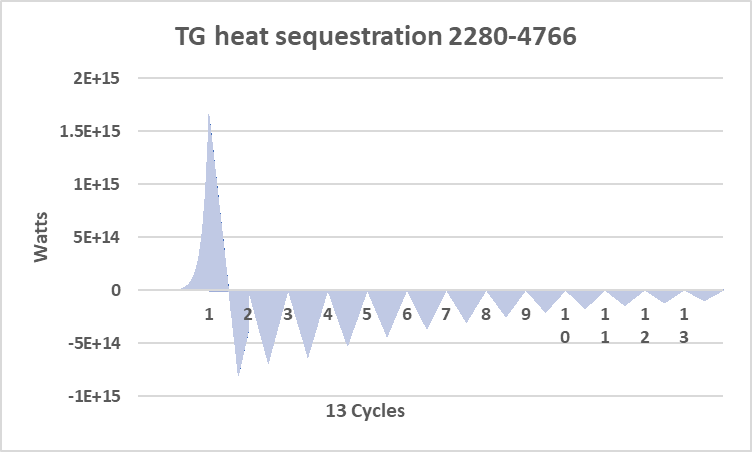 As the graphic shows, after an initial heat accumulation, all the heat of warming will remain beneath the ocean’s surface, but for the 8.3% waste heat of conversions that will migrate unimpeded into space once the greenhouse blanket starts dissipating after emissions have ceased.

By moving this heat away from the surface, every consequence of global warming is mitigated.

Which is just outside the range of the 10–30 TW carbon-free power called for  by Hoffert and Caldeira et al. in their paper  Energy implications of future stabilization of atmospheric CO2 content.

The hard to decarbonize industries, like air transportation, shipping and cement currently consume only about 10% of the annual total of 18TW. But enabling a hydrogen economy with electrolysis of seawater can productively utilize a significant part of the 31 TWs of heat currently going to waste.

Even as that heat produces significant environmental damage.

Electrolysis is a 70–80% efficient process so at least 22 TWs can be used to develop the hydrogen economy.

Some of the rules of thumb for this economy are:

Global warming can only be halted by dropping the EEI to zero but in this process, we also must maximize the EROEI because we have become dependent on energy yet are increasingly at the whim of nature.

Instead of either/or, we can have it all with the right technology which Thermodynamic Geoengineering provides.