Joshua D. Rhodes (@joshdr83) is a Postdoctoral Research Fellow in The Webber Energy Group and the Energy Institute at the University of Texas at Austin. His current research is in the area of...

Energy Wonks Have a Meltdown Over the U.S. Going 100% Renewable. Why?

In the U.S. a furious debate has erupted among academic energy experts about whether the country could run 100% on renewable energy. Joshua D. Rhodes, Postdoctoral Researcher of Energy at the University of Texas, Austin, explains what is going on and offers some thoughts of his own. Courtesy The Conversation.

Science is messy, but it doesn’t have to be dirty.

On June 19, a group of respected energy researchers released a paper in the journal Proceedings of the National Academy of Sciences (PNAS) that critiqued a widely cited studyon how to power the U.S. using only renewable energy sources. This new paper, authored by former NOAA researcher Christopher Clack and a small army of academics, said that the initial 2015 study had “errors, inappropriate methods and implausible assumptions,” about using only the sun, wind and water to fuel the U.S.

What followed was a storm of debate as energy wonks of all stripes weighed in on the merits of the PNAS analysis. Mark Z. Jacobson, a Stanford University professor who was the lead author of the 2015 study, shot back with detailed rebuttals, in one calling his fellow researchers “fossil fuel and nuclear supporters.”

I recently took a tour of Hoover Dam. One of the first things they tell you is that the dam was built for irrigation and flood control, and that electricity production is a nice side product

Why the big kerfuffle? As an energy researcher who studies the technologies and policies for modernizing our energy system, I will try to explain.

In general, getting to a clean energy system – even if it’s 80 percent renewable – is a well agreed-upon goal and one that can be achieved; it’s that last 20 percent – and how to get there – that forms the main point of contention here.

Jacobson’s seminal paper, which was also published in PNAS, tied together a significant amount of work of his own and others showing that all energy used for all purposes in the U.S. could come from wind, water and solar (WWS) by 2050.

What about when the sun doesn’t shine, the wind doesn’t blow or water is unavailable? His findings postulated that significant amounts of energy storage would be needed, mostly in the form of heat and hydrogen, to meet energy demand when there isn’t enough renewable energy and to store it when there’s too much. They also concluded this scenario would be cheaper than a world that relies on other technologies such as nuclear, carbon capture and other methods of reducing carbon emissions.

The Clack rebuttal was blunt and cut deep at the assumptions that underlie the work of Jacobson and colleagues. The same PNAS issue also included a counter-rebuttal to Clack from Jacobson. 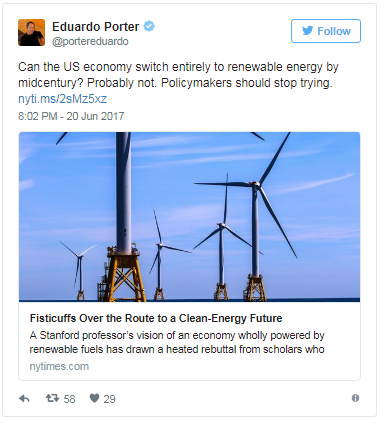 So why all the fuss?

Much of the heat from this debate seems to stem from Jacobson making some pretty bold claims in and about his paper, going so far as to tell MIT Technology Review that “there is not a single error in our paper.” That is a very, very bold claim and, depending on how it is interpreted, could be read to say that the study authors’ model is perfect, which of course it is not, as none are.

This debate may seem arcane, but it has significant political and societal implications.

Some celebrities have signed on to Jacobson’s vision and have pressed for policies formed around his analyses of the feasibility of an entire energy system that runs 100 percent off of wind, water and solar. If policymakers buy into the technical and economic assumptions in the paper, it has big implications for the direction of state, local and national policies.

Detractors, meanwhile, have raised a number of concerns. In particular, they argue that decisions made based on Jacobson’s analyses alone could lead to serious overinvestment in only the technologies considered, which could possibly backfire if the costs turn out to be higher than expected.

To make projections around how the future energy system will work, researchers create computer-based models, input assumptions and then run simulations.

The rebuttal from Clack and co-authors focused on four major issues they saw with the WWS paper: 1) modeling errors, 2) implausible assumptions, 3) insufficient power system modeling and 4) inadequate scrutiny of the input climate model, which informs how much solar and wind power are available for power generation. Here are some highlights with my own thoughts sprinkled in.

Having worked in residential energy use, and energy retrofits in particular, I find the amount of geothermal energy storage retrofits for heating and air-conditioning in buildings Jacobson assumed hard to fathom

Clack takes issue with the amount of hydroelectric power that Jacobson assumes is available. In their rebuttals, they spar over the exact numbers, but Jacobson assumes there is about the same amount of total energy produced from hydropower in 2050 as today, although when, and at what rate, that energy is produced is a crucial question.

In Jacobson’s model, there is a significant increase in hydropower capacity – up to 1,300 gigawatts (or about 10 times current capacity), which appears to run for at least 12 hours straight in some days of the model output. Jacobson says this is possible by installing more turbines and generators at existing dams, just not using them very often.

But dams are built with specific maximum flow rates because if you let too much water flow through a dam, you can flood areas downriver. Jacobson has since admitted that providing this much extra power from existing dams would be hard.

I recently took a tour of Hoover Dam. One of the first things they tell you is that the dam was built for irrigation and flood control, and that electricity production is a nice side product. So expecting that dams in the country could boost their output might be harder than the analysis implies.

Clack questions a long list of input assumptions of Jacobson’s model. A number are related to how quickly technologies can mature and be used at large scale, including underground thermal energy storage, phase change materials to store solar thermal energy, and hydrogen as a usable fuel. Other critiques focus on assumptions around how flexible the demand for energy can be – a key consideration when dealing with variable sun and wind power. Then there’s the amount of electric transmission power infrastructure needed, the costs of all the capital required, the pace of investment needed and land use issues.

If Jacobson’s work can survive this challenge, I figure it will stand the test of time

Some criticisms are probably fair. I tend to be bullish on the potential of technology to advance rapidly, but having worked in residential energy use, and energy retrofits in particular, I find the amount of geothermal energy storage retrofits for heating and air-conditioning in buildings Jacobson assumed hard to fathom.

I have some reservations on the ability of 67 percent of demand to be flexible. I also have some questions on the pace of investment required in Jacobson’s scenario.

Clack attacks LOADMATCH, the power system model in Jacobson’s analysis, as being too simplistic. The main criticism of LOADMATCH is that it does not consider frequency regulation – the need to keep the frequency of the power grid steady at 60 Hz, which is a very important aspect of keeping the power supply reliable.

One piece of anecdotal information: Jacobson states in the paper Supplementary Information that it takes LOADMATCH about three to four minutes to simulate an entire year. Our simulations of just the Texas electricity market can take hours to run, and can take significantly longer for simulations of high levels of renewables.

After reading both papers, both supplementary information sections, the counter-rebuttal, a lot of news articles and tweetstorms (from other energy folks I trust), I find myself thinking that the burden of proof is still in Jacobson’s court. There are many lessons to learn here.

But, in the end, my view is that the body of scientific understanding will be stronger for it. The peer review process is slow, uses imperfect human volunteers and doesn’t always get it exactly right the first time. The list of authors on the Clack rebuttal is impressive, and should be paid attention to. However, if Jacobson’s work can survive this challenge, I figure it will stand the test of time.

Joshua D. Rhodes (@joshdr83) is a Postdoctoral Research Fellow in The Webber Energy Group and the Energy Institute at the University of Texas at Austin. His current research is in the area of smart grid and the bulk electricity system, including spatial system-level applications and impacts of energy efficiency, resource planning, distributed generation, and storage. He is also interested in policy and the impacts that good policy can have on the efficiency of the micro and macro economy, especially policy that utilizes market forces to increase efficiencies.