Ye Tao of Harvard’s Rowland Institute warns that "Temperature rise, is the biggest and gravest concern that we face.”

"We are overstepping a heat threshold” he says.

That threshold is the thermodynamic threshold Tom Murphy, Professor of physics, University of California, San Diego demonstrated in his article Galactic-Scale Energy from his series “Do the Math”.

Murphy showed that since 1650, America’s energy usage has steadily climbed at the logarithmic rate of 2.9% per Figure 1. 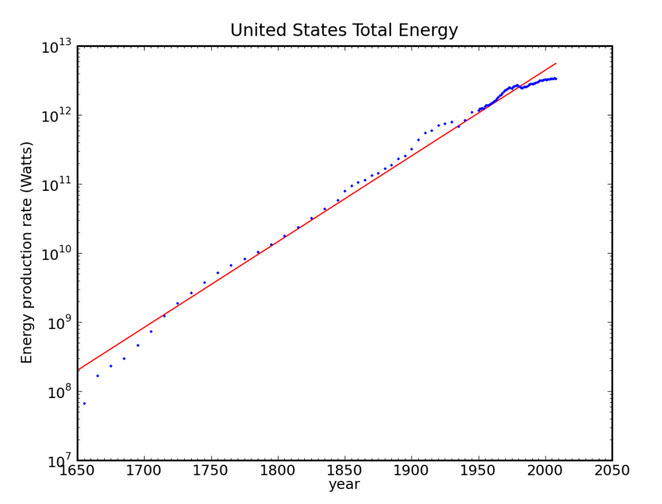 Per Figure 2, this rate of growth leads to a requirement for all the solar energy that strikes the Earth within the next 400 years and Figure 3 shows the thermodynamic implications of that kind of temperature rise.

“If we confine ourselves to the Earth’s surface, we exhaust solar potential in 400 years. In order to continue energy growth beyond this time, we would need to abandon renewables—virtually all of which derive from the sun—for nuclear fission/fusion. But the thermodynamic analysis says we’re toasted anyway,” Murphy warns.

Mark Buchanan, in his Nature Physics article The thermodynamics of Earth quotes Albert Einstein who considered thermodynamics to be among those principles unlikely to be changed by future scientific discoveries. “It is the only physical theory of universal content,” he wrote, “concerning which I am convinced that within the framework of the applicability of its basic concepts, it will never be overthrown.”

“The power of thermodynamics rests on the understanding that fundamental consequences follow from how the energy is organized within a system, as reflected in its entropy, a measure of the dispersal of energy across microscale degrees of freedom,” Buchanan said. And cited  Axel Kleidon from his book “Thermodynamic Foundations of the Earth System.

Kleidon examined “how radiant energy is progressively converted to various forms of higher-entropy energy in a cascade through the Earth system, creating temperature gradients, mass flows, phase changes and rich chemistry. The low-entropy energy changes entropically as it moves through the Earth system. Radiant energy arriving from the Sun gets converted into chemical, kinetic and thermal energy, stirring myriad entropy-producing flows.”

The second law of thermodynamics however says that each of these conversions produces waste  heat.

Zevenhovena and Beyene in their paper, The relative contribution of waste heat from power plants to global warming says, “the fate of vast amounts of waste heat rejected into the environment has evaded serious scholarly research. While 1 kWh electricity generation in a typical condensing coal-fired power plant emits around 1 kg of CO2, it also puts about 2 kWh energy into the environment as low grade heat. For nuclear (fission) electricity the waste heat release per kWh is somewhat higher despite much lower CO2 releases.”

Mark Flanner in his 2009 paper, Integrating anthropogenic heat flux with global climate models said, “Nearly all energy used for human purposes is dissipated as heat within Earth's land–atmosphere system. Thermal energy released from non-renewable sources is therefore a climate forcing term. Averaged globally, this forcing is only +0.028 W m−2, but over the continental United States and western Europe, it is +0.39 and +0.68 W m−2.”

Skepticalscience compared the relationship between waste heat and greenhouse warming in the following graphic. 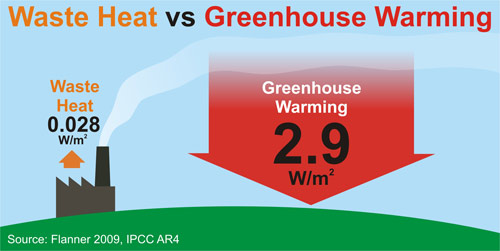 Nicola Jones in the YaleEnvironment360 article, Waste Heat: Innovators Turn to an Overlooked Renewable Resource, says that “waste heat is a problem of a thousand cuts.” And as the following table demonstrates, at an annual rate of increase of only 1% it takes only 444 years for the forcing from waste heat to equal the current rate of forcing from emissions.

And in only 906 years the annual increase from waste heat will equal the annual current forcing from emissions.

Whereas Murphy used a logarithmic scale to show how viral energy growth has been the past 372 years, the following graphic shows the potential exponential growth of waste heat growth going forward. 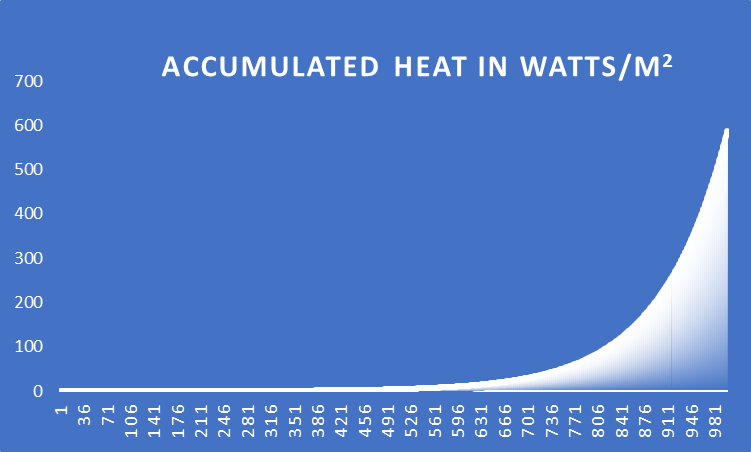 We aren’t just overstepping the heat threshold; we are creating Hell on Earth.

The only way we can derive the energy we need is to convert the heat that is already trapped in the system to work and to allow the waste heat of those conversions to dissipate to space.

Since we are adding between 450 and 1000 terawatts of heat annually and we can only convert a fraction of that to work each year, the best bet is to recycle the difference through the oceans until all the accumulate heat has been converted to work, which is a 3,000 year enterprise.

. The heat of global warming accumulating in our oceans is golden in the eye of the perceptive beholder.