Politicians profess an aversion to picking technology winners all the while subsidizing fossil fuels to the tune of $5 trillion a year while leaving the public to pick up the cost of greenhouse gas emissions that in 2015 killed 9 million people and did $4.6 trillion in economic damage.

The fossil industry is a major sponsor of the electoral campaigns of its cronies and skews democracy by outspending the eco-friendly who are economically depleted by the environmental damage of the polluters. All of which leads to the unrest witnessed in democratic and non-democratic constituencies alike around the world.

This tension between the economy and the environment is one of our most contentious issues and yet is totally unwarranted.

Economists tell us, “A carbon tax offers the most cost-effective lever to reduce carbon emissions at the scale and speed that is necessary,” calling climate change a “serious problem” that needs “immediate national action.” Yet, the poll released this week by the Energy Policy Institute at the University of Chicago (EPIC) and The Associated Press-NORC Center for Public Affairs Research shows that only about half of Americans over 18 support a carbon tax.

Like politicians, the economists are pitting one side against the other with the result there are no outright winners and the careful management of our available resources goes by the boards. 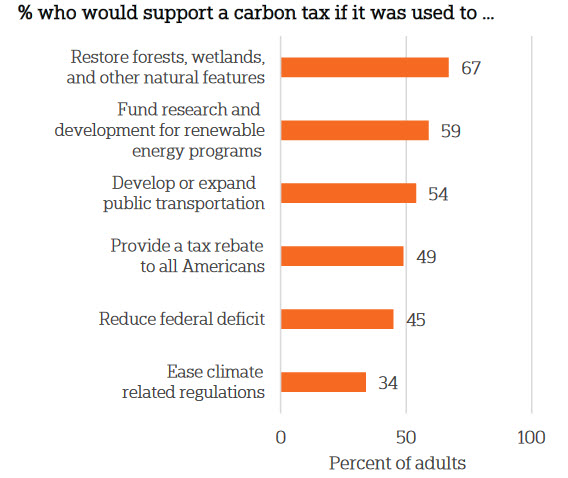 The flip side of the carbon debate was espoused by the American Energy Alliance in its 2015 Energy Townhall, which cites opposition to a carbon tax based on: increased transportation and utility costs, increased cost of goods and services, disproportionate damage to low income communities and seniors, decreased American economic competitiveness, increased air pollution due to offshoring of industry to regions with weaker environmental standards, minimal environmental impact, the tax is not a market-driven, it is a tool for politicians to continue wasteful government spending, it is not “revenue-neutral” and finally they say claim 60% of Americans oppose the idea, though, the number seems to have decreased in the ensuing three years according to EPIC.

What concerns those opposed to carbon taxes most is there share on the wealth and resources of the country, which as Eugene Ludwig, former comptroller of the currency under the Clinton administration said recently have at best stagnated for most.

More than 50 percent of income gains from 2009 to 2015 went to the wealthiest 1 percent of Americans, according to Emmanuel Saez of the University of California at Berkeley in his paper Wealth Inequality in the United States Since 1913: Evidence from Capitalized Income Tax Data and a tax on carbon isn’t going to help the cause of the 99 percent one iota.

Enter entropy, which is the thermodynamic quantity representing the unavailability of a system's thermal energy for conversion into mechanical work, often interpreted as the degree of disorder or randomness in the system.

Global warming is thermal energy the unavailability of which for conversion into mechanical work is the problem.

A method that converts this thermal energy into mechanical work is the solution and what’s more, this is energy legitimately too cheap to meter because it costs less than fossil fuel subsidies or the current environmental damage let alone the combination of both.

The jobs and benefits associated with the difference between 14 and 29 terawatts of primary, sustainable, energy is the social benefit 99% of us are currently missing out on and which a carbon tax will never provide. What’s more the thermal energy not convert to mechanical work by Negative Emissions OTEC returns to the surface where it can be recycled to produce additional work until all of it is consumed, which would be about 3,250 years from now.

In the alternative,  ideas like those recently espoused by the Leonardo DiCaprio Foundation would cut world energy use by 26% and thus forego the economic, environmental and social benefits of twice as much energy.

And then there are the notions that forests can save us or at least can be claimed as carbon credits when across the planet these have flipped from carbon sinks to carbon sources and will continue to propagate, not decline because warming will not allow stable ecosystems to be restored, much less reduce warming.

Which leaves the third pyramid of the trifecta the environment, which would be mitigated by the continuous production of renewable energy that reduces surface heat, CO2 emissions, sea level rise, storm surge and intensity, and ocean acidity.

The energy trifecta is the only solution that makes winners of us all.