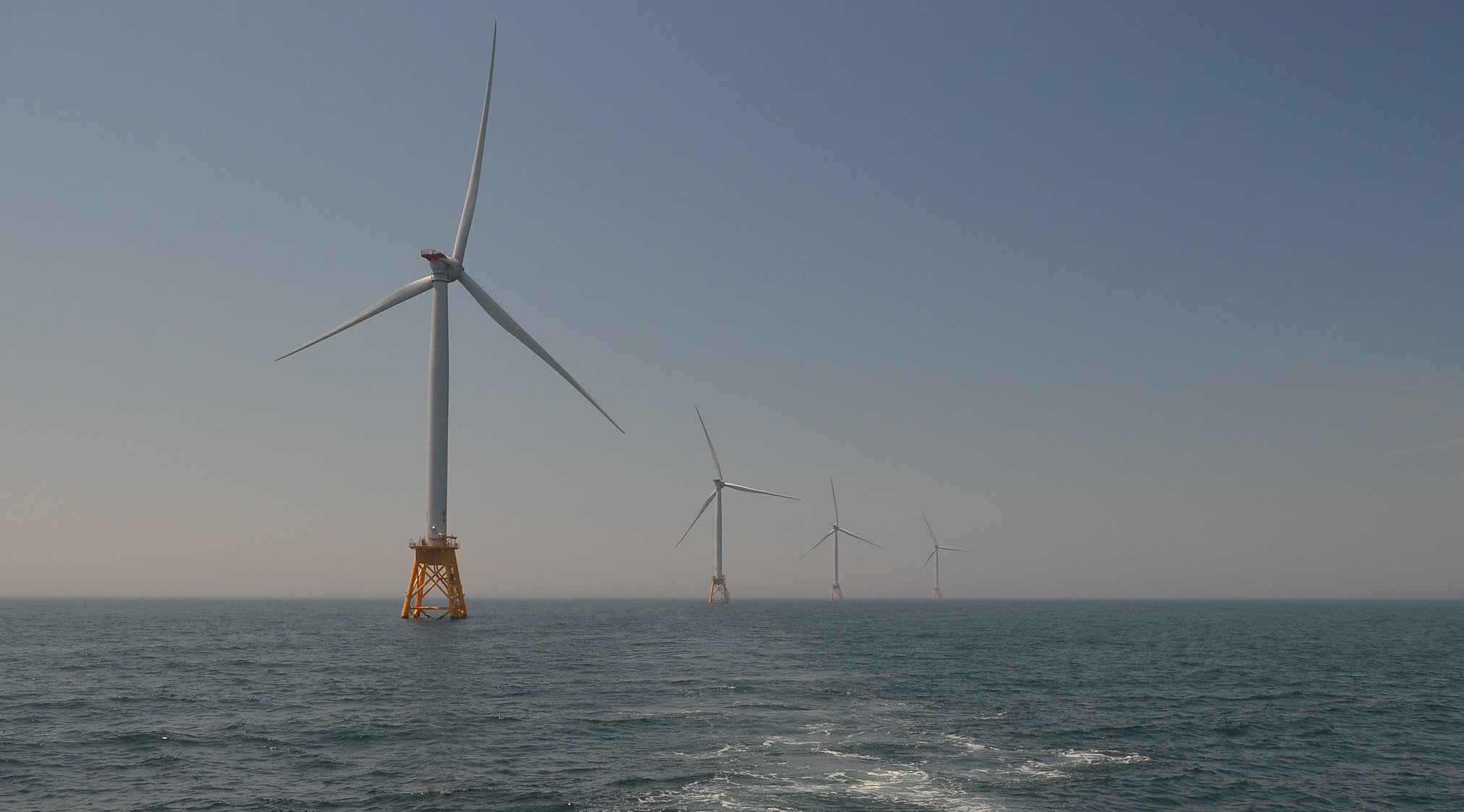 This week in advanced energy news, it’s all about bigger, better, and cheaper! First, from the U.K., offshore wind prices so low they leave people used to traditional resources slack-jawed, plus a boost for U.S. solar as it reaches a 2020 cost goal three years ahead of schedule. Finally, GE decides it’s time for a bigger onshore turbine, and Anheuser-Busch buys enough wind to power 20 billion beers. Bottoms up!

“World’s largest” has a nice ring to it, but we tend to see that once every few months in offshore wind. Unique this time, however, was the outcome of competitive auctions for the power generated at these offshore farms, where the prices hit record-breaking lows. Hornsea 2 and Moray, another new offshore wind construction, both came in with a price of £57.50 (USD $76.34) per MWh. A third wind farm emerged slightly higher at £74.75 (USD $99.22). These prices are nearly 50% lower than the U.K.’s last offshore wind generation auction in early 2015, and they’re so low they’re cheaper than other new forms of generation, including 35-year contracts for new nuclear power and, valued at £92.50 per MWh, and cheaper than the levelized cost of gas.

The manager for policy and innovation at The Carbon Trust, Rhodri James, told Greentech Media that “people are still trying to put their jaws back in place.” The Carbon Trust leads the U.K.’s Offshore Wind Accelerator research and development program.

Representatives of other forms of generation were quick to point out that their technologies could give offshore wind a run for its money. Rolls-Royce, which is investing in small modular nuclear reactors (SMRs), pointed out that SMRs could deliver electricity at a similar cost to offshore wind once they come online. Meanwhile, Greentech Media wrote earlier this summer that the global declining cost of solar is unlikely to slow down, hitting “jaw-dropping lows around the world.”

Stateside, that rings true. Just this week, the Department of Energy announced that it would expand the successful SunShot program after it hit its cost goal three years ahead of schedule. The original goal was to get utility-scale solar costs under $1 per watt or $0.06/kWh by 2020, but it’s 2017 and, spoilers, we’re already there.

“Secretary Perry is certainly focused on improving the resiliency of the grid,” Becca Jones-Albertus, acting deputy director for the SunShot initiative, told Utility Dive. “We’re continuing to focus innovation that can drive cost reductions to meet the 2030 goal, so that includes focusing on the hardware side; on longer lifetimes and better durability.”

Under the SunShot expansion, DOE is allocating $62 million for concentrated solar technologies and $20 million for grid operation technologies that will help grid operators detect problems and defend against attacks. SunShot grant winners will have projects 80% funded, and will need to raise the remaining 20%. By 2030, the agency expects to be able to cut costs in half to $0.03/kWh for utility-scale projects, $0.04/kWh for commercial projects, and $0.05/kWh for residential solar. Which will be great – that is, unless petitioners in the ongoing solar trade dispute get their proposed tariff of $0.40/watt and a floor price of $0.78/watt for imported solar panels.

Back in the world of wind, another AEE member is going big. GE announced plans to commercialize the world’s biggest onshore wind turbine, targeting a European market hungry for bigger and better wind turbines. The giant 4.8 MW turbine has a rotor the diameter of 158 meters. It will be the biggest on the market but, as Greentech Media points out, probably not for long.

“This new class of 4-megawatt turbines has really just hit the market over the last year-and-a-half,” said Aaron Barr, a senior consultant with MAKE Consulting (now, along with GTM, owned by Wood Mackenzie), in an interview with Greentech Media. “They’re so new that very few of them have been prototyped to date, but every turbine manufacturer is rushing toward this space.”

Finally, in June we brought you stories of bricks (of the LEGO variety), breakfast (cereals), and banks that were all choosing advanced energy. This week you can add another B to that list: beer! Anheuser-Busch, the company behind Budweiser, has announced a virtual PPA deal with Enel Green Power to purchase RECs and electricity delivered to the grid that will amount to 152.2 MW of output from the Thunder Ranch wind farm in Oklahoma.

Earlier this year, the company announced that it would be transitioning entirely to advanced energy by 2025. João Castro Neves, president and CEO of Anheuser-Busch, said in a statement that the move is “a strategic business move as we strive for long-term sustainability.”

This proves it, beer and advanced energy really do go hand in hand. Crack one open for us.

Last year, AEE worked with other groups to track the advances in corporate energy choice. In 2016 Corporate Advanced Energy Commitments, AEE reports that 71 Fortune 100 companies have set renewable energy or sustainability targets, up from 60 just two years ago. Download that report, along with Private Procurement, Public Benefit: Integrating Corporate Renewable Energy Purchases with Utility Resource Planning, free at the link below.

Those are installed in Germany, Netherlands, Belgium, Sweden, France, etc.

Some of it’s problems:
– the size and weight of it’s parts (the blades come in 2 parts) which make transportation expensive.
– the heavy parts often also require special foundation for the high installation crane.

The 9.9 cents/kWh you report is jaw-droppingly expensive, compared to under 5 cents/kWh in New England for steady, reliable power.

Your photoed US Deepwater Wind costs $290 million for 30 MW peak generating capacity, leading to an average cost of 28 cents/kWh.

Your assumption about battery capacity needed is way beyond reality.

After the Germans around 2000 and others, French govt institute ADEME recently ran simulation studies regarding the cheapest electricity in 2050. Read their report.

Bas, the assumptions in your 2016 report are way beyond reality – 34 years beyond, to be exact.

I was around when glowing reports and simulations of 100% renewable energy were being presented 34 years ago. They didn’t pan out then, and they won’t pan out in 2050.

Physics can be annoyingly consistent that way.

This expensive energy gets averaged into the utility’s contracted energy mix.

Canada misjudged the market and overbuilt hydro; there are now several transmission proposals to supply various markets, including New England.

As an example, two weeks ago New York state received two proposals. They were seeking 1 TWh a year of clean energy, one proposal had Hydro-Québec supplying between 5.8 and 8.3 TWh a year @ 6¢/kWh.

Rex,
Please provide the URL for the 6 c/kWh.
I looked all over but cannot find it.

Sorry. The first real simulation studies were commissioned in the nineties by the Germans who had a long hot debate about the possibilities of renewable during that decade.

At that time biomass was the cheapest renewable, so biomass got an important position in the first scenarios (then PV-solar was >$1/KWh).
The position of biomass was already weakened in 2000, as then there was already consensus that a mass market would create the major price decreases of solar and wind prices, as we saw in past ~15years.

It’s not my report but that of the official French govt institute. And French govt took it serious as they installed in autumn 2015 two lows:
– one to reduce nuclear share from 75% then, to 50% in 2025. Which is a much faster decrease of nuclear than the German Energiewende.
– one to increase renewable fast in order to compensate for the loss of nuclear capacity.

Yes, the article was unclear, “Electricity at the time was selling in the United States for 8 or 9 cents a kilowatt. Canada’s producers knew they could sell hydropower for about 6 cents.”

The ADEME report’s foreword has an interesting quote from (car pioneer) Henry Ford: “If I had asked people what they wanted, they would’ve said faster horses.”

The current public demand for more renewable energy should be treated like a request for faster horses.

It is remarkable that even in a non-fossil fuel producing country like France, which has already de-carbonized the electricity supply, the renewable energy movement is able to de-rail and distract attention from any efforts to decarbonize the other energy use sectors (e.g. heat and transportation), and instead focus on rebuilding the (already clean and sustainable) electricity sector.

The fossil fuel industry could not ask for a better life-line than the renewables movement.

Pro-RE interests are saying PV solar (heavily subsidized) is competitive with fossil in some very sunny areas of the US (Texas, Arizona, New Mexico, etc.), but that is far from reality in not-so-sunny, variably cloudy New England, as proven by energy prices of 4 auctioned projects (heavily subsidized).

The production of recently auctioned PV Solar projects (8,380 kW) was about 10,897 MWh during the latest 12 months.
http://www.windtaskforce.org/profiles/blogs/vermont-speed-renewable-ener...

The average price paid to multi-millionaires owners of these large systems was about 13.26 c/kWh, about 2.2 times the NE annual average midday wholesale price of about 6.0 c/kWh.

Owners of the 4 projects could make such low bids, only because the equivalent of about 54% of the turnkey capital cost was ITCs and rapid asset depreciation tax savings during the first 6 years, plus they received high feed-in prices for their production.

Without those subsidies, the cost of PV solar in Vermont, and all of NE, would be about 20 c/kWh.
http://www.vermontstandardoffer.com/projects-online/

In addition, PV solar requires grid system build-outs of several $billion per year, on a US basis. Those costs/kWh are charged to rate payers and tax payers.

In addition, PV solar requires other generators to operate less efficiently (more fuel/kWh, more CO2/kWh, more wear and tear/kWh) to provide the required peaking, filling-in, and balancing, 24/7/365, whenever the variable, intermittent solar electricity would be insufficient to satisfy demand. Those costs/kWh are charged to rate payers and tax payers.