On the occasion of the 20th anniversary of the German Renewable Energy Act (EEG) there will be an amendment. And that amendment is indeed necessary because of changed market conditions and necessary higher climate efforts. The draft law entered the public consultation phase in mid-September 2020. The new regulations are then to come into force on January 1, 2021.

We have summarised the most important changes in an extra article here. Basically, the government wants renewable energy plants to be more competitive and finance them based on market mechanisms. However, there are also follow-up regulations for renewables that will fall out of the financial support from 2021 (source: Energiezukunft).

With modified tender quantities, the legislator wants to achieve that the 65 per cent target of renewable energies in gross electricity consumption is reached in 203o. Figure 1 shows a comparison of renewable energy capacities in Germany as of mid-2020 and the targets of installed capacity in 2030 according to the 2021 amendment of the EEG. 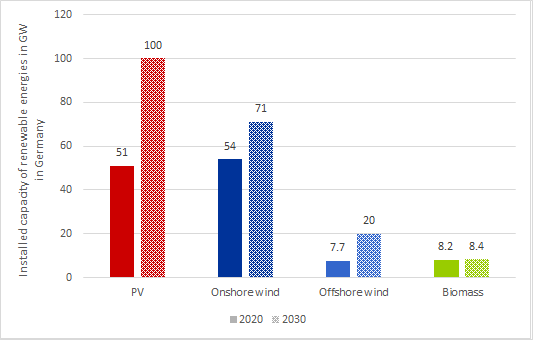 Figure 1: installed capacity of renewable energies in GW in Germany in 2020 and in 2030 according to the EEG amendment 2021 (source: Energy Brainpool)

Climate Protection Pact from the Ministry of Economic Affairs

Earlier in September, Federal Minister of Economic Affairs, Altmaier, presented a paper that is to be the basis for a fundamental understanding of all parties, unions and environmental organizations on the subject of climate change. With this initiative, the Ministry wants to bring about a broad social consensus on climate policy and not make climate protection dependent on “political coincidences”.

The paper “Protecting the Climate & Strengthening Prosperity” contains 20 proposals which are to be processed next year by the Bundestag and Bundesrat in a charter for climate neutrality and economic success across party and parliamentary groups.

In the charter, the necessary annual reduction targets from 2022 to climate neutrality in 2050 are to be laid down and the relevant ministries and offices are to be obliged to adopt suitable measures to achieve the climate targets.

Other ideas from the paper include the gradual reduction of the EEG levy, the compensation of economic disadvantages for companies subject to competition from non-EU countries, the development of a “Clean Products made in Germany” label, and the establishment of a Climate and Business Council, a “Climate University”, a “Climate and Business” foundation, and an international agency “Climate global” (source: Montel).

The ideas from the pen of the Ministry of Economic Affairs were largely met with praise from the business community. Above all, a societal approach to the topic of climate protection is desirable. However, there was also criticism: the Greens, but also Environment Minister Schulze, called for concrete action and not just more paper tigers with announcements (source: Montel).

The latest emissions report from the EU Commission does not bode well. The trend of increasing CO2-emissions has also continued in 2019. While 130 million tons or 3.7 per cent were saved in Europe compared to 2018, 348 million tons or almost 1 per cent more CO2 still entered the atmosphere worldwide. Of the global emissions of 38 GtCO2 in 2019, the EU accounted for just under 9 percent. In 1990, the European countries still had a share of 20 percent.

Even though the effects of the corona pandemic are not yet foreseeable, the Commission’s experts expect global CO2-emissions to be 8 percent lower this year than in 2019 due to the economic slump (source: Montel).

However, since this reduction in emissions is not sustainable, EU Commission President von der Leyen announced on Wednesday, September 16, 2020 that the EU is aiming to reduce its greenhouse gas emissions by at least 55 per cent compared to 1990. According to a new report by the EU Commission, the previous target of minus 40 per cent can be achieved with the existing and planned measures (source: Montel).

While the EU Commission speaks of a 55 per cent reduction, the EU Parliament’s environment committee has considered a reduction target of at least 60 per cent. In the first week of October, the EU Parliament will coordinate its position on the new target. The new targets will certainly also be on the agenda at the next meeting of EU environment ministers on October 23rd (source: Montel). The EU Commission has rejected the demands of environmental associations for a target of 65 or even 70 per cent less emissions by 2030. This would “simply not be feasible” in this period (source: Montel).

Critics complain that the EU Commission is playing a trick on its 55 per cent target. This is because the new calculation is to include emissions from land use. Experts expect that, compared to the previous calculation basis, this will actually correspond to a reduction of the new EU target by 2.5 to 5 percentage points, i.e. more likely a reduction in greenhouse gas emissions of 50 to 52.5 percent compared to 1990 (source: Montel).

Up and down on the long end

At the end of the year, demand for electricity in the countries of Western Europe could still be up to 3 percent below the normal level. Experts do not expect a complete recovery until after 2022 (source: Montel).

At the same time, according to a report by the energy company BP, the corona pandemic could permanently reduce global demand for oil. Due to the consequences of the pandemic, BP expects in its scenarios that changed economic and social conditions will ensure that oil demand by 2025 will still be 3 million barrels/day lower than before the pandemic (source: BP). At the beginning of September, oil prices fell by more than ten percent, only to return to around 42 USD/barrel towards the end of the month.

After a brief high of just over 31 EUR/tonne due to the EU Commission’s proposals for the new climate target for 2030, CO2-prices fell again somewhat towards the end of September. The price of electricity for the front year fluctuated between 40 and 43 EUR/MWh in September, while the CO2-certificate prices for December 2020 reached their low at just above 26 EUR/tonne. Figure 2 shows the price development of various commodities in August and September 2020.

On September 15, 2020, the German intraday market saw the highest prices for a year. The quarter hour from 6.45 to 7 pm reached a peak price of 3,999.99 EUR/MWh. This was due to a combination of higher demand, low conventional power plant availability and hardly any wind. Accordingly, power plants with very high start-up costs had to cover the residual load.

The high level of solar radiation from mid-September gave PV another boost, while the low wind feed was compensated by relatively high electricity generation from hard coal-fired power plants. The power generation and day-ahead prices for Germany are shown in Figure 3.