Like the entire first quarter of 2021, March 2021 is characterized by low feed-in from renewable energies. The results of the heavily oversubscribed second coal tender have now been published. Commodity and CO 2 prices rose again in March.

The share of renewable energies in net electricity generation fell significantly in the first quarter of 2021 compared to the previous year. Electricity production from renewable sources declined, mainly due to the unfavorable weather in March with little sun and wind. At just 42.7 percent, the share of renewable energies (source: Energy Charts ) is 12.9 percentage points lower than in the first quarter of 2020. This reverses the ratio of renewable and non-renewable generation compared to the previous year.

Figure 1 shows this relationship between the types of generation for the first quarter of 2020 and 2021. 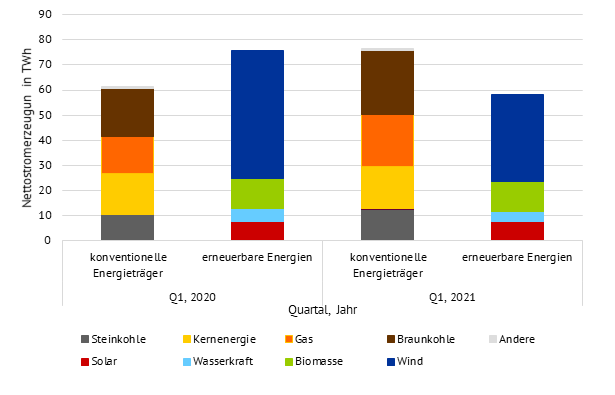 In the first quarter of 2021, wind power remained the strongest energy source in Germany with a share of 25.6 percent. Even so, it experienced the largest relative decline of -32.8 percent compared to 2020. Generation from hydropower fell by 23.9 percent. Solar feed-in also experienced a decline (-6.1 percent).

In order to compensate for the low feed-in of renewable energies, the feed-in of conventional energy sources increased significantly. Lignite rose sharply again in the first quarter of 2021 and rose by 33.4 percent. Above all, gas feed-in increased significantly, at 46.7 percent compared to the previous year. This makes it the third largest share of the total net electricity generation. Gas feed-in is closely followed by nuclear power, which also increased slightly by 12.5 percent in the first quarter.

On April 1, 2021, the Federal Network Agency published the successful bids of the second round of tenders from the beginning of January, according to the Coal Power Generation Act (KVBG). Meanwhile, the tender for 1,500 MW was significantly oversubscribed - it was intended to help reduce the amount of electricity generated from coal by hard coal plants and small-scale lignite plants.

Due to the strong competition, the highest bid value of 59,000 EUR / MW was therefore well below the statutory maximum price of 155,000 EUR / MW. The lowest bid value awarded was even 0 EUR / MW. Every successful bidder receives an award in the amount of his individual bid value.

Three bids for a total of 1,514 MW were accepted. The highest bid of 757 MW awarded was due to a bid by Uniper Kraftwerke GmbH for the Wilhelmshaven hard coal-fired power plant. In addition, the Mehrum power plant was awarded a contract for the associated unit 3 for 690 MW. And the smallest bid amount awarded went to the Deuben power plant of Mitteldeutsche Braunkohlegesellschaft mbH with 67 MW. This means that only power plants with an age of at least 40 years were eligible.

Systems that have been awarded a contract may no longer burn coal from December 8, 2021.

March 2021 was marked by an increase in forward market prices. Overall, the prices for electricity, gas, coal, oil and CO 2 are at a higher level at the end of the month than at the beginning of the month and continue to show a positive trend (Figure 2).

The CO 2 lead contract showed growth of almost 14 percent over the course of the month. In the middle of the month the price seems to follow the financial market rather than the actual CO 2 demand. In addition, the price is rising to a record high of EUR 43.36 / tonne, among other things due to the hope that the pandemic situation will improve (source: Montel ).

The electricity prices follow the CO 2 prices and reach a two-year high of 56.20 EUR / MWh in the middle of the month in the front year.

The front year gas is initially supported by the cool weather in March and is experiencing a price increase. In the middle of the month, a downward trend can be observed due to milder temperatures. However, the outlook for low temperatures at the beginning of April will push the day-ahead price up again at the end of the month to a 7-week high of EUR 19.45 / MWh (source: Montel ).

The share of renewable energies in electricity feed-in is only 47.4 percent in March 2021, the lowest level since 2018. In addition, March is characterized by strong fluctuations in the feed-in profile of wind energy. Figure 3 shows this electricity generation from various technologies and the day-ahead prices in March 2021 for Germany.

At the beginning and end of the month, the temperatures were unusually mild. And with 30 percent more hours of sunshine than usual for March, there was a comparatively high solar feed-in of 4.64 TWh in March. In the middle of the month there was less solar feed-in. In return, strong winds led to a high feed-in of wind energy with a maximum of 46.92 GW on March 11, 2021. In general, however, the wind feed-in was at a low level of 11.6 TWh and thus ensured the low share of renewable energy feed-in.

The feed-in of conventional energy sources was relatively high at the beginning and end of the month, especially due to the low wind feed-in. This was particularly evident in the form of a high generation from gas-fired power plants of 7.01 TWh.