Tenders for renewables: everything remains the same

While the addition of wind and solar power increased in the first half of 2020 compared to the same period last year, there was nothing new concerning the results of the tenders from July 2020. In the tender for just under 200 MW of solar, 30 bids were accepted and the average tender value fell to 5.18 ct/kWh. The solar tender was almost four times oversubscribed with 174 bids with a total capacity of 780 MW.

In the tender for onshore wind energy, the data from the Federal Network Agency also show the familiar picture. There were bids for only two thirds of the tendered quantity of 275 MW. At 6.14 ct/kWh, the volume-weighted tender value for the 26 projects remained at the same level as in the previous tender in June 2020. Figure 1 shows the range of bid values for the tenders for onshore wind in 2020. 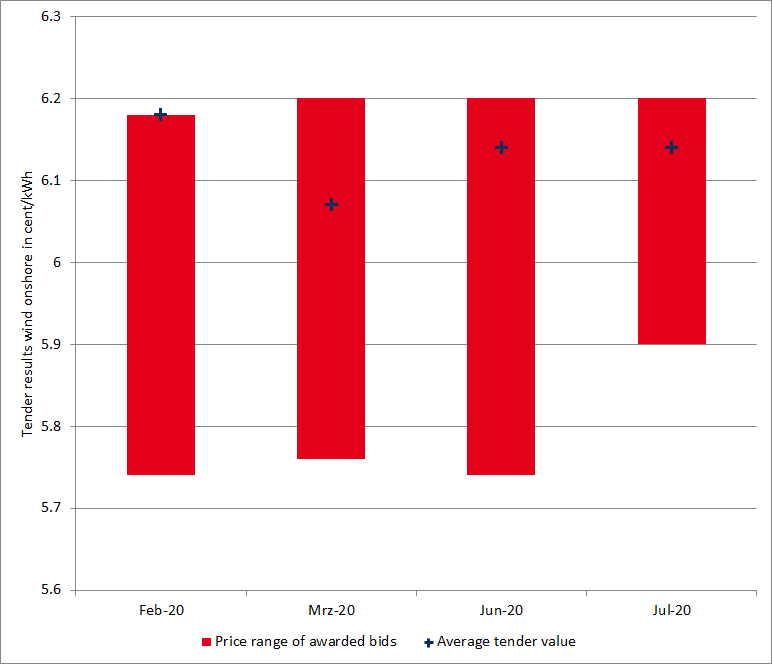 Figure 1: range of awarded tender values and average tender value in onshore wind tenders since the beginning of 2020 in ct/kWh (source: Energy Brainpool)

In September, the first innovation tender with a volume of 650 MW is finally to be opened. The maximum value for bids for individual plants in the upcoming tender is 3 ct/kWh, for combinations of renewable energy power plants, 7.5 ct/kWh.

Amendment of the renewable energy law in September?

Despite the parliamentary summer holidays, there are increasing indications that the Federal Ministry of Economics is planning to amend the renewable energy law (EEG) in autumn 2020. According to a cabinet schedule, the federal government intends to pass the amendment on September 23 (source: Energate). On January 1, 2021, the amendment should then come into force.

The main points of the amendments to the EEG include three measures to implement the “Action Program Wind on Land” (source: BMWi).

Further ideas and proposals revolve around simplifying the continued operation of old renewable energy plants that will be excluded from financial support from 2021 onwards. Besides that the 10 kW limit for own consumption systems should be set to a realistic level for multi-family houses.

The climate circle of the conservative party also put a relief from certain electricity price levies for energy storage and power-to-x applications on the agenda (source: PV Magazine). On the other hand, the industry association BDEW is calling for an increase in the annual tender volumes: at least 3700 MW for onshore wind and 5000 MW for photovoltaics (source: Montel).

Criticism of the content of the amendment comes from the BNE, which points to the unrealistically low electricity consumption assumptions for 2030 from the point of view of sector coupling and the National Hydrogen Strategy (source: PV Magazine).

Discussions about the content and the schedule of the EEG amendment are expected to pick up speed in September after the summer break. We will keep you up to date on this important topic.

In mid-August 2020, the German Federal Network Agency announced the first tender under the Coal Exit Act. By the first bidding date on September 1, 2020, a total of 4000 MW of electrical capacity to be shut down will be tendered (source: Bundesnetzagentur).

The Federal Constitutional Court has rejected an urgent application by the energy company STEAG to increase the volume of the first tender (source: PV Magazine). The EU Commission has not yet approved the Coal Exit Act under state aid law.

Even though German electricity consumption up to 20 August 2020 was 5-6 percent lower than in the same period of the previous year, demand in August rose to a similar level as in 2019, and Eon expects electricity consumption to fall by 2-3 percent for the whole of 2020. It appears that demand has slowly returned to normal levels after the corona lockdown.

However, a second corona wave in autumn or winter could lead to economic stagnation and thus also to a downturn in electricity demand (source: Montel).

Accordingly, the future prices for electricity remained very stable in August. It was not until August 20 that the front year rose from below 40 EUR/MWh to just under 43 EUR/MWh by the end of August. The main driver for this development was the CO2 lead contract for December 2020, which also rose again to just under 30 EUR/tonne.

Further support for commodity prices came at the end of August from Hurricane Laura, which restricted oil and gas production on the east coast of the USA (source: Montel).

Figure 2 shows the development of the German power front year, as well as the CO2-certificate prices with delivery in December 2020 and the gas front year from the beginning of July to the end of August 2020. The increase in prices at the end of August is clearly visible.

Figure 2: percentage price development of the German electricity front year (candle sticks), the CO2 certificates with delivery in December 2020 (orange line) and the gas front year (red line) from the beginning of July to the end of August 2020 (source: Montel).

Less wind and sun in August, but a new record

Compared to July, power generation from wind and solar was lower in August 2020. Even the storm Kirsten at the end of August could not change this. The share of renewable energies stood at around 46 percent this month.

Nevertheless, on Wednesday 26 August, photovoltaics and wind power were able to provide 75 percent of Germany’s net electricity production for the entire day. Around noon of that day, the renewable energy feed-in from wind (43.5 GW) and solar (17.8 GW) also reached a new joint record level of 61.3 GW. Figure 3 shows German electricity generation from various technologies in August 2020.