Energy Leads All Sectors In 2021

The rocky times of 2020 are well behind the energy sector at this point. Last year there were many premature obituaries written for the energy sector, but it has certainly shown plenty of life in 2021.

The energy sector has soared from the last quarter of 2020. After performing as the top S&P 500 sector for two straight quarters, the energy sector slipped to third place in the recently-completed second quarter. But that was still good enough to keep energy in first place for the first half of 2021.

The Energy Select Sector SPDR ETF (XLE) tracks an index of energy companies in the S&P 500. The XLE represents the stocks of large energy companies from different sub-sectors (e.g., integrated, oil production, equipment services). It is, therefore, a good benchmark for conservative energy investors. Some of the XLE’s biggest holdings are ExxonMobil, Chevron, ConocoPhillips, EOG Resources, and Schlumberger.

Among the Select Sector SPDRs that divide the S&P 500 into 11 sector index funds, the energy sector was by far the best-performing first half sector. (Note that all returns discussed here are total returns, which include the effect of dividends paid during the year). 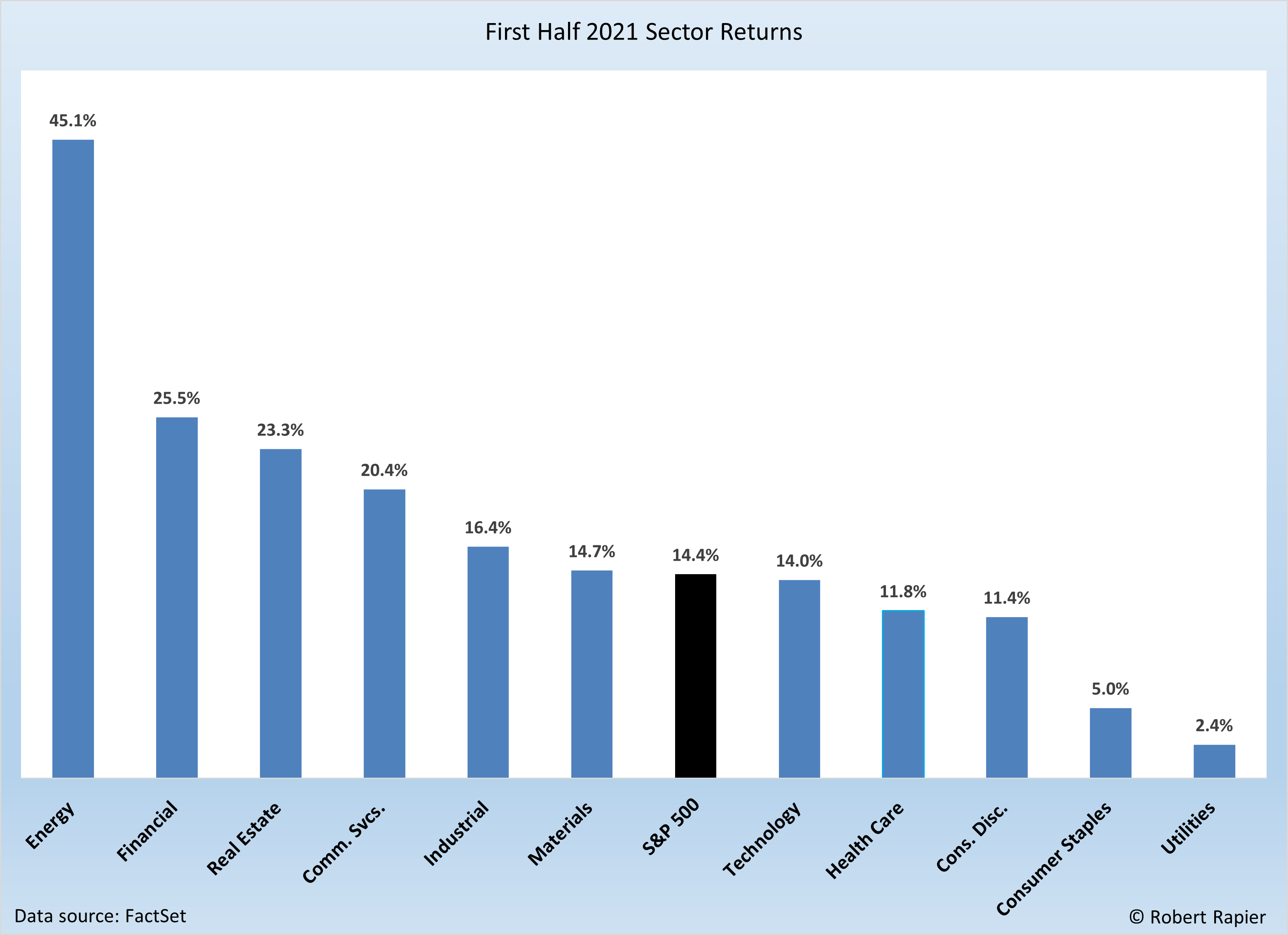 Every subsector of the energy sector has outperformed the S&P 500 in 2021.

According to data provider FactSet — which I use to analyze companies — the average upstream company gained 112.1% in the first half of 2021. These are the companies that produce and store oil and gas.

Among the 55 companies that FactSet classifies as “midstream”, the average return was 47.0%. Best among the group was Summit Midstream Partners, which generated a total first half return of 143.2%. Only one company in the entire midstream group — NGL Partners LP — had a negative return in the first half (-0.8%).

The integrated supermajors averaged a gain of 29.2%. After underperforming the rest of the group in recent years, the best performer in the first half was ExxonMobil with a total return of 57.9%.

The Big Three refiners — Marathon Petroleum, Valero, and Phillips 66 — gained an average of 38.8% for the half. Marathon was the best performer with a gain of 49.2%.

Momentum for the energy sector did slow in the second quarter, and the sector has pulled back a bit in the early days of the third quarter. The sector’s fate in the second half will be closely tied to oil prices, which are well ahead of where I thought they would be at the year’s midpoint.

The primary culprit driving oil prices higher remains U.S. oil production that is still down more than a million barrels per day from the pre-pandemic peak. Meanwhile, U.S. demand for petroleum products in June was almost back to record levels. As we have seen time and time again, small imbalances between supply and demand can have enormous impacts on oil prices.