Energy transformation and movement is at the heart of a Chemical Engineer's training. The Chemical Engineer, like many other engineering disciplines, has a hugely significant role to play in delivering net zero.

The main energy users in the US are shown. 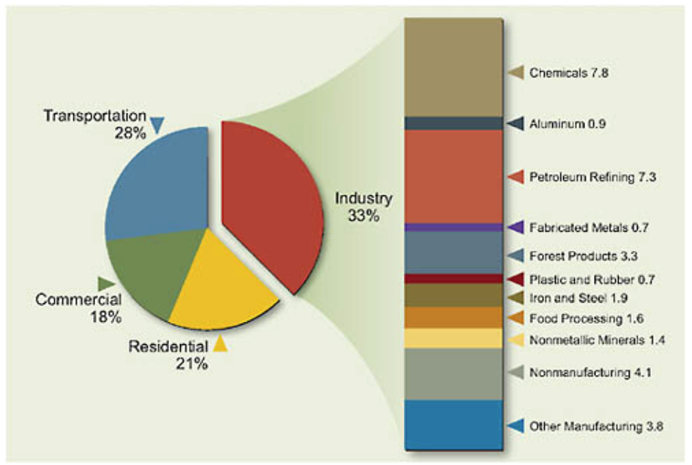 A scan of the sectors clearly shows the significant Chemicals and Petrochemicals energy impact – the Chemical Engineer’s patch.

Although not exhaustive, or indeed cutting edge, the following narrative is aimed at reminding Operations and Design Engineers of energy saving opportunities associated with common process plant.

Pumps are ubiquitous throughout our industries and are one of the major energy users. Indeed, they are the largest user of power in the EU. It is self-evident that improving operational pump efficiency, or designing for high efficiency pumps, will have a material influence on carbon emissions.

So what influences pump hydraulic efficiency?

These combine to reduce the hydraulic efficiency of the common centrifugal pump to typically 70 – 80%: the inefficiencies manifesting themselves as heat. Pump efficiencies exceeding 80% are possible by using advanced manufacturing techniques but the penalty is increased capital cost. This is often the case with energy efficiency options – they cost more.

It should be noted that a pump operating at low efficiency might not be apparent to the Operations Engineer. Hence opportunities to save energy by repairing or replacing components and optimising systems are often overlooked as the pump appears to be running well.

Pumps do exactly what you don’t want. As a consequence of the head flow characteristic they produce higher pressures at low flows. To balance the hydraulics we take the high discharge pressure and reduce it across a control valve – thereby wasting energy. In general that is what a control valve does – it wastes energy. Rather than a control valve, a variable speed drive could be used; matching speed to required discharge pressure and thereby improving efficiency. Similarly pump sparing could be adopted where multiple pumps in parallel are matched to throughput. Both options though increase cost and complexity.

Use of drag reducing agents could also reduce power requirements but such chemicals are very expensive.

Figure 2 was prepared by Sulzer. It shows the historical progress in compressor efficiency improvements. Highly efficient compressors can be manufactured but as stated beforehand, a more efficient machine will cost more money and may take longer to fabricate.

Many industrial compressors will have an anti-surge control system that will recycle gas at low suction flows. Alternatively, to avoid surging, suction throttling can be used to deliver increased volume. In both cases there is waste of energy but it is simple and it works – key aspects for low capital, reliable operations. Because surging is such a concern many control systems are set up too conservatively resulting in unnecessary throttling and recycling. A review of the surge characteristics and control algorithms could deliver a low cost energy win by allowing for operation closer to surge.

Like pumps, energy efficiency and surge management could be improved by deploying a variable speed drive.

Thermodynamics shows that the work done on a fluid is the integral of VdP. Clearly if the suction volume, V or the differential pressure, dP can be reduced energy savings will be delivered. Suction cooling is an obvious option for reducing V with dP influenced by the pressure drop through upstream and downstream piping and equipment. Low pressure drop piping and equipment usually translates to larger diameter pipework and equipment – additional cost.

Gas pipeline contractual obligations may result in operational line packing. Essentially the pipeline is used as a reservoir of gas in case of supply failure. The pipeline can be unpacked to provide agreed gas delivery rates allowing time for the supply to be reinstated. This means that the pipeline is operated at a much higher pressure than required for steady state conditions. Whilst packing makes good commercial sense it is poor from an energy efficiency viewpoint.

For reciprocating compressors, efficiency is mainly influenced by;

There is a vast amount of literature available on column energy efficiency with much of it focused on complex analytical techniques. Let’s not forget the obvious. One of the simplest ways to reduce reboiler energy usage is to preheat the feed stream. This can be accomplished with a feed/product exchanger.

Side heaters can be used to add heat to a tower several trays up from the reboiler. Because of the temperature gradient in the column, heat can be applied at lower temperatures reducing reboiler duty.

Heat pumping can be used for reboil and condensing duties. Compression is used to raise the temperature of a Rankine fluid above that required for the reboiler. The fluid leaving the reboiler is then flashed to a lower temperature and used to condense the overheads. The main operating cost then becomes the compressor rather than the normal heating and cooling utilities.

Many plants have several fractionators with condensers and reboilers at a variety of temperatures. It may be possible to link a condenser and reboiler from separate columns.

An alternative to sequential distillation is the divided wall column. (DWC). Consider the separation of three components, A, B and C. Conventionally this would be undertaken with a sequence arrangement - remove A first with the bottoms B and C being split in a second column. In the first column, the concentration of B reaches a maximum somewhere in the tower but necessarily must be lower in the bottoms. This represents a thermodynamic loss with consequent lowering of energy efficiency. Utilising a DWC can minimize this thermal inefficiency. The DWC incorporates a pre-fractionator and a main column into one vessel.

Analysis shows that the DWC can deliver energy saving of about 30% for a typical design. And of course a capital cost saving would be delivered by only using one column.

Use of optimisation techniques to interrogate a heat and mass balance can deliver some surprising findings. An example is an oil and gas processing plant where gravity separators reduce the oil pressure thereby liberating low molecular weight, hydrocarbon gases. The evolved gases are compressed in multiple stages to deliver gas for export. Each stage of compression involves cooling, liquid knock out and compression as shown in figure 3.

The condensed natural gas liquids (NGL) are recycled back to the separation system where a portion is re-flashed thereby impacting gas rates and compressor power. Custom and practice is to set cooler outlet temperatures at 30 oC and compression ratios at around 3 to 1. Whilst this will deliver a workable heat and mass balance it does not address the complex phase behaviour, recycle and re-flashing interactions.

A heat and mass balance was prepared for a typical two-stage gravity separation system with associated four stage compression system – one LP Compressor and three HP compressors – all in series.

A genetic optimisation algorithm was used to determine optimised pressure and temperatures: the objective function being to minimise compressor power. Compressor inlet temperatures and interstage pressures were adjusted within upper and lower bounds.

Table 1 shows the initial non-optimised conditions and the new conditions identified by the optimiser. Figure 4 shows the compressor power requirements. 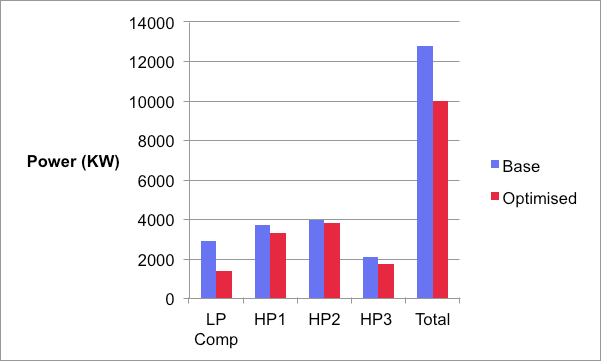 An overall 20% compressor power reduction was achieved. The findings though are somewhat non-intuitive. It might have been expected that to reduce compression power, the optimiser would have taken all suction temperatures to the lowest permitted. As can be seen, this was not the case – the complex pressure, temperature, composition phase behavior coupled with the effects of re-flashing of recycled NGLs, resulted in a some suction temperatures being increased. Importantly the optimser found conditions that reduced compression power that conventional design practices would have failed to identify.

What hinders the deployment of energy saving plant and equipment?

Most energy saving opportunities are fairly self evident to the Chemical Engineer. Justifying them is another matter. Investment decisions will seek to find a balance between;

My experience would suggest that we have to value carbon and other emissions much more than we do today to make the business case for incorporating energy saving options. The need for an effective CO2 tax is obvious.