The recent launch of the first liquefied hydrogen carrier vessel in Japan is a historic event that captured headlines in the media.  Just like the first LNG tanker more than half a century ago, it marks the beginning of a new era. And, it is again Japan that leads the way in establishing the first international trade routes for shipping clean hydrogen from Australia and Brunei to Japan.  Many will be watching these  pilot trades closely, eager to benefit from the lessons learned.

As an eventful hydrogen year 2019 draws to a close, it is becoming clear that there is a growing interest and action for a global clean hydrogen market.  In an increasing number of countries with ample low-cost energy resources, governments and companies are seriously reviewing the possibilities of developing a clean hydrogen export industry.  Australia and Brunei have already been mentioned, with Australia explicitly focusing on exports in their recently published hydrogen strategy.  But we observe similar trends, to a varying degree, in New Zealand, South Africa, Morocco, Tunisia, Portugal, Spain, Scotland, Chile, and Argentina.  Furthermore, there are clear signs that the opportunities of exporting clean hydrogen are under review in Saudi Arabia, United Arab Emirates, Kuwait, Oman, Qatar, and Russia.  Obviously, we need to wait and see how fast this will develop, but in a growing number of cases concrete projects and shipping routes are being considered.  In several countries the focus is on green hydrogen from cheap solar or wind-energy (like Portugal, New Zealand, Morocco, Argentina), but in others it’s both green hydrogen and blue hydrogen from fossil fuels with CCUS.

As we are getting a sense of which countries are potential next-exporters of clean hydrogen, the same is the case for potential net-importing countries. In Asia, Japan and Korea have already clearly signaled the need for large-scale imports of clean hydrogen. In Europe, Germany, the Netherlands, and Belgium are among the countries where most experts think that if the scaling-up in the use of clean hydrogen in the next ten years is successful, the domestic production won’t be sufficient to meet the demand.  Particularly in the manufacturing industry, the potential demand for clean hydrogen resulting from a hydrogen-focused decarbonisation pathway will be so big that it will outpace supply growth.  Just to mention one striking number: only replacing the current grey hydrogen use in European industry by green hydrogen would already require a doubling of the entire European electricity production.  When it comes to clean hydrogen trade within Europe and between Europe and North-Africa, a dedicated hydrogen pipeline-infrastructure, on the basis of re-purposed gas pipelines, may well become the preferred cross-border transport mode.  For the US, the IEA also expects a net-import demand if clean hydrogen use takes off.  The IEA graph below provides a good overview of the global hydrogen trade landscape that may emerge from these trends. 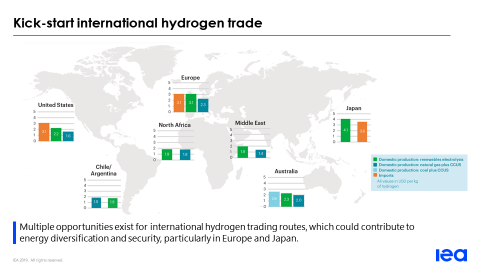 It is very hard to predict how long it will take before we see a robust global clean hydrogen market emerge.  In the case of LNG, it took about half a century.  Much will depend on whether the world will be successful in scaling up cost competitive production and use in the next ten years.  In addition, key questions will be whether a clear winner will emerge from the currently considered transport modes (i.e., liquefied, ammonia, or liquid organic hydrogen carrier), and how fast the cost of shipping will come down.  Governments need to play a key role in setting the right framework conditions and stimulate common standards and guarantees of origin.

My sense is that hydrogen trade developments are moving faster than we thought just one year ago.  It will be exciting to track how this new global market will shape up in the years to come.  IPHE stands ready to help and facilitate where it can, in cooperation with IEA and other key players in the energy arena.