ELECTRICITY DELIVERY & MANAGEMENT: Energy Storage Takes Off, On Grid and in Microgrids

This post is the last in a series of excerpts from the Advanced Energy Now 2021 Market Report, prepared for AEE by Guidehouse Insights.

The year 2019 was one of the biggest for Electricity Delivery and Management, recording 13% growth globally and 14% in the United States; 2020 was strong as well, with global growth at 9% and 10% in the U.S.

Total revenue in the global market has traditionally been driven by large-scale transmission infrastructure, but Energy Storage has emerged as the fastest growing subsegment globally, with a CAGR of 47% from 2011 to 2020 and 35% growth last year, reaching $3.8 billion. Conversely, transmission, which comprised nearly half of Electricity Delivery and Management revenue in 2011, dropped from $6 billion to just over $3.2 billion in revenue since 2016.

In the United States, Transmission, which comprised nearly half of Electricity Delivery and Management revenue in 2011, has dropped from $6 billion to just over $3.2 billion in revenue since 2016. Meanwhile, Energy Storage has taken off, especially in the past year, jumping 139%, to $1.6 billion, in 2020, capping a run at 39% CAGR since 2011.

Both globally and in the United States, grid-scale energy storage continues to gain traction in the marketplace. Global revenue for Energy Storage has grown drastically over the last decade from $117 million in 2011 to $3.8 billion in 2020. In the United States, Energy Storage revenue climbed from $81 million to $1.6 billion over the same period. While energy storage has behind-the-meter applications, helping customers reduce costly demand charges from times of peak consumption, and new opportunities will emerge for owners of distributed energy storage to participate in wholesale markets under FERC Order 2222 (see below), much of the growth to date has come in managing the bulk-power system, and it shows no sign of slowing down. 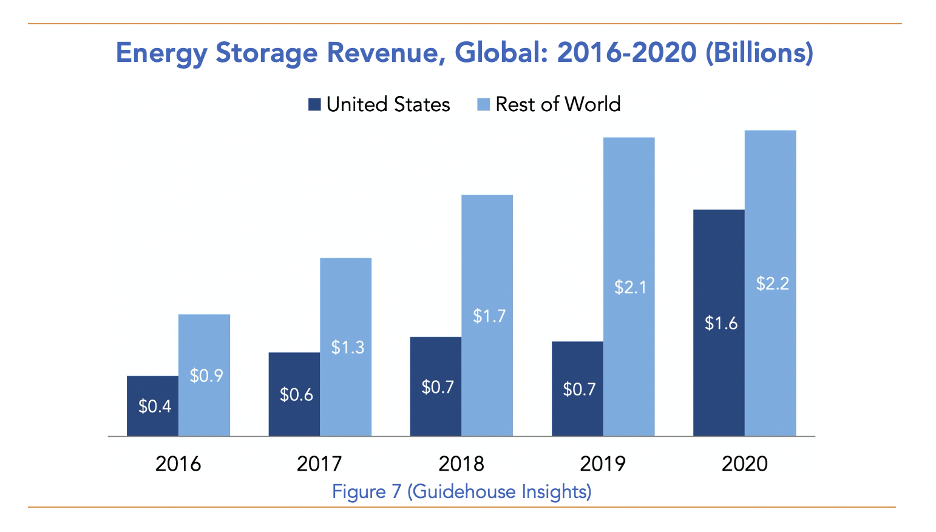 Today, energy storage has become a key component of power system planning in countries around the world, representing a major shift from 2018, when the technology was still largely considered too expensive or complex for integration into energy markets. Falling battery prices have made energy storage projects cost-competitive with fossil fuel generation and other technologies for numerous applications, including peak generating capacity and frequency regulation. However, the most substantial shift has been the improving economics of combined solar-plus-storage projects, which are now cheaper than natural gas generation in many locations and account for a large, growing portion of the global energy storage market.

Notably, in 2019, the Los Angeles Department of Power and Water entered into a contract for a 400 MW solar+storage project with a price for solar of 1.997¢/kWh — half the estimated cost of power from a new natural gas plant — and battery power for 1.3¢/kWh. In 2020, Southern California Edison announced it would buy 770 MW of cost-effective energy storage, most of it co-located with solar farms, to help the utility replace four gas power plants along the Southern California coast.

When Guidehouse Insights first started tracking the microgrid market in 2011, the C&I segment was the smallest. Today, this segment is now forecasted to be the fastest growing in North America. The reason is simple. These customers This could prove especially attractive in the U.S., where customers know the cost of power outages. During last year’s Public Safety Power Shutoff (PSPS) events in California, businesses realized they needed better solutions than back-up diesel generators that faced emission limits on run times. Globally, a similar value proposition is being made, especially in off-grid environments where the cost of diesel fuel is expensive, and integration of renewables reduces ongoing O&M costs.

There are four reasons Guidehouse Insights forecasts that C&I will be the fastest growing microgrid market over the next decade, with an especially attractive market in the U.S.:

These trends prompted the creation of GreenStruxure, the new venture by Schneider Electric and Huck Capital, which is focused on modular, standardized microgrids for medium-sized facilities in the half-megawatt to 5 MW range. As with other vendors offering modular solutions targeting C&I customers – which include Bloom Energy, with its fuel cell microgrids, or Scale Microgrid Solutions, with its standardized packages combining dispatchable natural gas generators, solar PV, and batteries that can be pre-configured to fit any site’s needs – California is now a focal point due to wildfires and PSPS events.

All told, the 2020 Microgrid market represented an $9.5 billion market globally; General Microgrids, which include C&I customers, accounted for $3.6 billion, or ~38% of this global market. The largest market globally in 2020 was Remote Microgrids at $4.1 billion. This reflects the fact that, outside of the U.S., the majority of microgrids deployed historically have been in emerging economies that lack traditional grid infrastructure. Total spending on Microgrids in the U.S. in 2020 was over $3.1 billion, growing 13% annually since 2011.

The driving force behind microgrid deployments is the growth in a wide variety of distributed energy resources (DER)s. As one of many options to aggregate and optimize DER, the microgrid platform allows for new levels of resilience and reliability – and now, as a result of Order No. 2222 in the United States, a future opportunity to participate in organized wholesale markets.

Although Order 2222 is not limited to microgrids, it signals an important shift by recognizing the inherent value of mixed DER asset portfolios to the grid. The ruling will accelerate the ability of microgrids to become virtual power plants (VPPs), providing grid services upstream to wholesale markets. By bundling DER assets into a single bidding entity, synergies between generation, load, and energy storage can be captured and rewarded financially. Globally, similar market reforms are taking place and will likely build on this important policy precedent.

The evolving mix of DERs at the microgrid level mirrors what is happening on the larger grid: an overall shift away from fossil fuels and toward renewable energy resources. The transition to modular technologies, like solar PV and storage, also positions these technologies as the leading choices for microgrid designs and wholesale market opportunity today and into the future.

Click below for the full Advanced Energy Now 2021 Market Report or two-page Highlights.