Electric Buses Can Save Local U.S. Governments Billions. China's Showing Us How It's Done

America’s largest cities are converting their bus fleets from fossil fuel to electric – what’s behind this accelerating trend? The answer, in a word: economics.

In many locations, the total lifecycle cost of running electric buses is lower than fossil-fueled buses, and if battery prices continue their rapid decline, the unsubsidized cost of buying an electric bus could be cheaper than diesel as early as the mid 2020’s.

While electric buses make economic sense for local governments, significant hurdles exist to mass fleet electrification. Fortunately, China may hold the key to overcoming them faster and cheaper than expected.

Electric buses are becoming a bargain due to lower operational and fuel costs – consider Chicago, which says each electric bus saves $25,000 in annual fuel costs.

Electric buses have lifecycle-cost advantages over internal-combustion engines because they covert energy into motion more effectively and have far fewer moving parts, making them cheaper to power and maintain over time.

CMU reports electric buses are still more expensive than diesel, but local transit authorities receive most of their capital funding from the federal government, so researchers reassessed the equation if 80% of a bus purchase were covered by outside funds. In this scenario, electric buses are the lowest-cost option for cities that receive federal funding. 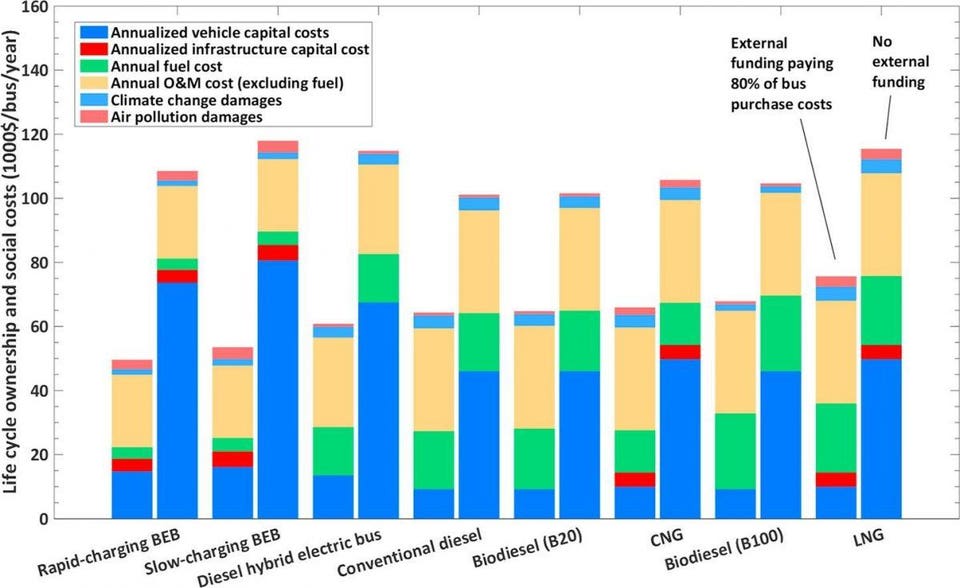 Even without federal funding, fast-falling battery prices could make electric buses the cheapest option within a decade. Bloomberg New Energy Finance (BNEF) reports batteries will only comprise 8% of the total electric bus price by 2030, down from 26% in 2016, making electric buses cheaper than diesel on an unsubsidized basis. BNEF says if battery costs fall faster than projected, electric buses could reach unsubsidized cost parity with diesel around 2025.

In cities with longer bus routes, electricity prices around $0.10 per kilowatt hour (kWh), and diesel prices around $2.50 per gallon, BNEF says electric buses will be fully cost competitive on a total cost of ownership basis around 2020. For context, diesel prices averaged $3.16/gallon nationallyin April 2018, while transportation sector retail electricity rates averaged $0.09/kWh nationally in February 2018 and were above $0.11/kWh in New England and the Mid-Atlantic. 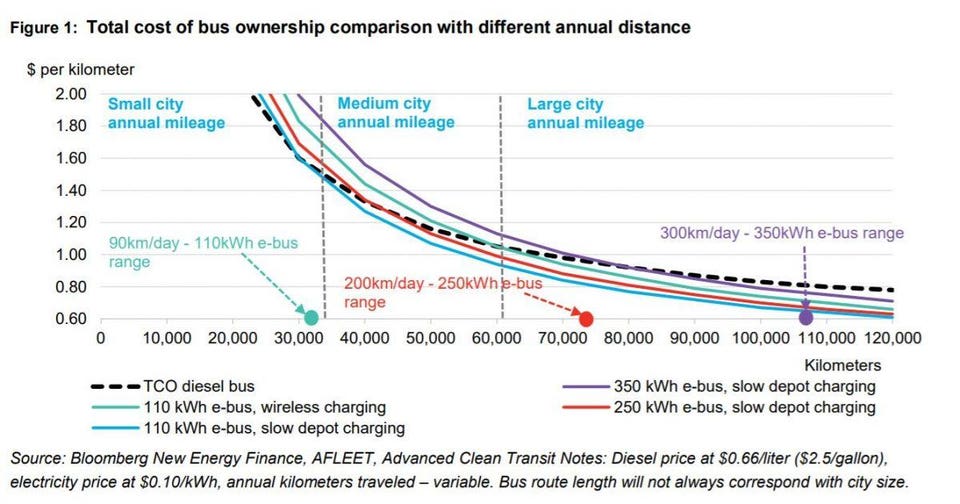 According to U.S. PIRG, 95% of school buses run on diesel (compared to 60% of public transit buses) and school districts would save nearly $6,400 annually in reduced fuel and maintenance costs per electric bus added. In this equation, U.S. school districts could save roughly $2.9 billion annually if the entire national fleet were converted from diesel to electric .

Even if PIRG’s estimate isn’t accurate, savings could add up quickly with electric buses: The American School Bus Council estimates U.S. school buses consume $3.2 billion worth of diesel per year, and BNEF estimates every 1,000 electric buses on the road displace 500 barrels of diesel fuel per day. 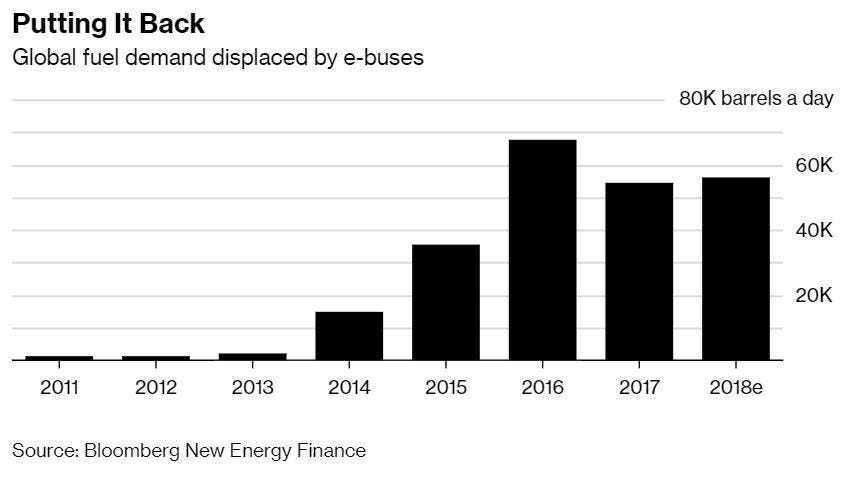 PIRG also reports replacing all U.S. school buses with electric buses would avoid 5.3 million tons of emissions annually. Anyone who’s ever ridden in a school bus remembers the acrid aroma of diesel exhaust, but breathing in diesel fumes is a major health risk for the 26 million kids PIRG says ride school buses. Diesel exhaust is classified as a likely carcinogen by the U.S. EPA and a 2015 study of 61 million people linked diesel exhaust to higher mortality rates.

So how can local governments overcome upfront financing hurdles? And why should cities wait decades to convert if lifecycle economics already make sense? The answer could be thousands of miles away. 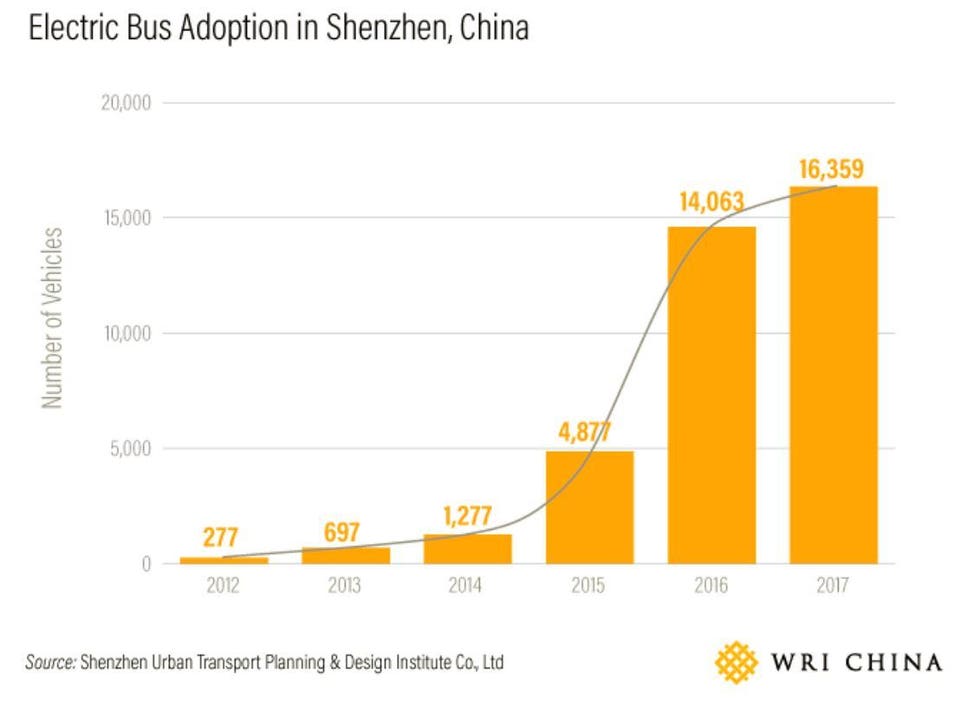 Comparing the Chinese and American electric bus markets aren’t apples-to-apples: China has around 99% of all electric buses worldwide, and bought 90,000 electric buses in 2017. China’s transition was powered by a central mandate and transitional funding from the government, but Shenzen’s lessons can still apply, with some translation.

Utilities can also leverage their business model to help local governments finance electric bus purchases by covering the up-front cost difference between diesel and electric buses, in exchange for a monthly charge on transit agency power bills and the value of new energy storage resources. In this approach, local governments get electric buses at the price of a diesel bus and save money over time, while utilities gain approximately $100,000 in new power sales over the life of each electric bus.

America may only represent 1% of today’s global electric bus market, but the economic upside of electrifying transit fleets is too significant to ignore. American’s “markets are driven by unit economics, local policy and community pressure to reduce pollution,” said Proterra CEO Ryan Popple. “The U.S. is catching up fast in adoption, and the market-based approach has led to better technology.”

Our largest cities are sending clear signals that the U.S. is ready to recharge mass transit, and while the federal government won’t issue a national mandate like China’s anytime soon, smart policy can accelerate electric buses on our roads.

By Silvio Marcacci, Communications Director at Energy Innovation, where he leads the firm’s public relations and communications efforts.