Per The EIA, The U.S. Is Still Energy Independent

That’s not strictly true, but it requires a bit of understanding about what energy independence actually is. I covered these issues in Is The U.S. Energy Independent?

If you are confused about the definition of energy independence, also see What Is Energy Independence?

As I explained, a correct accounting would be to add up all of our energy production (oil, natural gas, coal, renewables) and then subtract our net energy consumption. The U.S. is a net exporter of coal and natural gas, so it really comes down to the petroleum balance.

U.S. net imports have been declining since 2005 as a result of hydraulic fracturing. That year, U.S. net imports of petroleum and petroleum products (e.g., gasoline, diesel, jet fuel) averaged 12.5 million barrels per day (BPD). By the time President Obama left office, the number had declined to 4.8 million BPD (Source). During Obama’s last full month in office, the number was 4.2 million BPD.

When President Trump took over, the downward trend continued. During President Trump’s last year in office, the net import number turned negative. It is therefore true that we gained energy independence (per this definition of net imports) under President Trump. Net exports in 2020 averaged 635,000 BPD for the year.

However, when the Covid-19 pandemic resulted in widespread stay-at-home orders, U.S. energy demand and energy production both plummeted. For the first four months of 2020, net exports averaged one million BPD. But then by May we had to start importing again. In May and June the U.S. imported (net) three quarters of a million BPD. In the second half of the year, net imports once again became net exports. For the full year of 2020, the U.S. became a net exporter for the first time in modern history.

What wasn’t clear was whether the U.S. would be a net exporter for the entire year of 2021. But the Energy Information Administration (EIA) recently posted the numbers for December, and we now have an answer. Net exports grew each month from September through December to push the final average for the year to a net export number of 162,000 BPD. That is significantly down from 2020, but it is still energy independent according to the net export definition.

We had lost our energy independence several times on a monthly basis since May 2020. But, the full calendar years of 2020 and 2021 both turned out to be net export years. (I should note that sometimes the EIA revises these numbers, but it would take some pretty big revisions to change the energy independence status of 2021).

Because of some months in which we imported a lot of oil, I thought we probably had lost our net exporter status at some point. It turns out I was wrong. 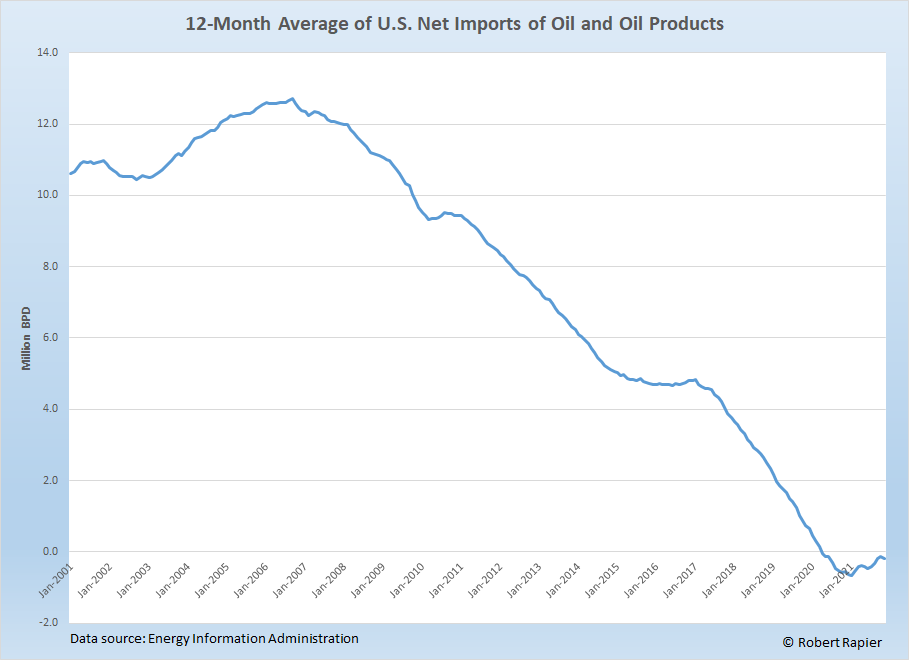 This graphic gives a more nuanced picture of events over time. It shows that our march toward energy independence stalled in 2015 and 2016. What happened in those years? That’s when Saudi Arabia tried to put the U.S. shale drillers out of business by flooding the market with oil and collapsing the price.

In 2017, we resumed the march toward energy independence. That happens to be the first year of Donald Trump’s presidency, but it also corresponds to Saudi Arabia waving the white flag and trying to prop oil prices back up. Between 2016 and 2018, the annual average price of West Texas Intermediate rose more than 50%. That price recovery helped boost oil production.

However, the graph also shows that once we first gained energy independence — which happened in April 2020 on a rolling 12-month basis — we have never lost it. But the downward trend switched directions in June 2021 (which covers the period of June 2020 through May 2021 — portions of both the Trump and Biden presidencies).

The average got close to zero, but it never changed back to a net import situation on a rolling 12-month basis. I would add that it’s not quite as bad as it looks if we were to factor in net exports of coal and natural gas. Further, if the trends in the past three months of 2021 continue, the graph will resume its decline. In other words, by this metric our level of energy independence will increase once again if these trends continue.