The Economic Turning Point. Are we there yet? Take a look at what Deloitte just said! The Turning Point: The new study of the Deloitte Center for Sustainable Progress models the impacts of an increase of 3 ° C of global average temperatures compared to pre-industrial levels, which is consistent with the current world trajectory.

An uncontrolled climate change will be a major obstacle to economic growth from now on and over the next 50 years, costing around 178,000 billion dollars in current net value during the period 2021-2070, as confirmed by the Deloite's new study.
It shows the associated effects on future productivity, economic production, and growth in industries and regions.
Zoom before: Unlike uncontrolled warming, the report indicates that if countries act quickly to reach zero net emission by 2050 and maintain global warming below 2 ° C, the world economy would see an expansion of 43,000 billion Net current dollars during the period 2021-2070. 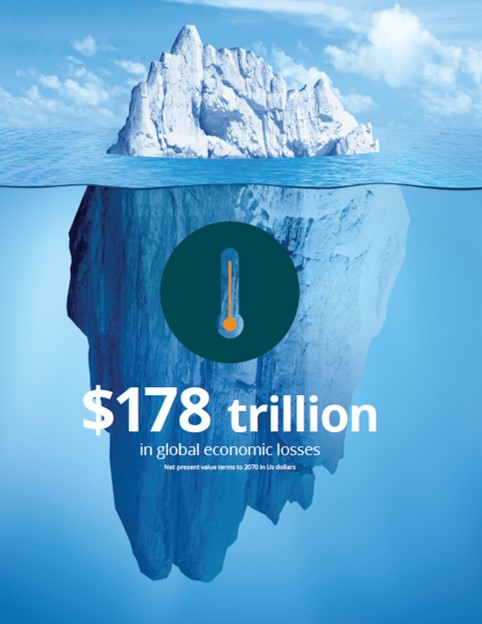 Yes, but there will be a period of time, which can last a few decades, where the initial costs of the clean energy transition will prevail over the advantages, notes the report. (A similar tone was set in a McKinsey report last year.)

The issues could be the highest in the Asia-Pacific region, according to the report, because a 3 ° C scenario would affect GDP. This is partly due to the vulnerability of the region to extreme weather phenomena.  But still, North America is impacted seriously and soon.  All regions of the globe need to act as soon as possible. 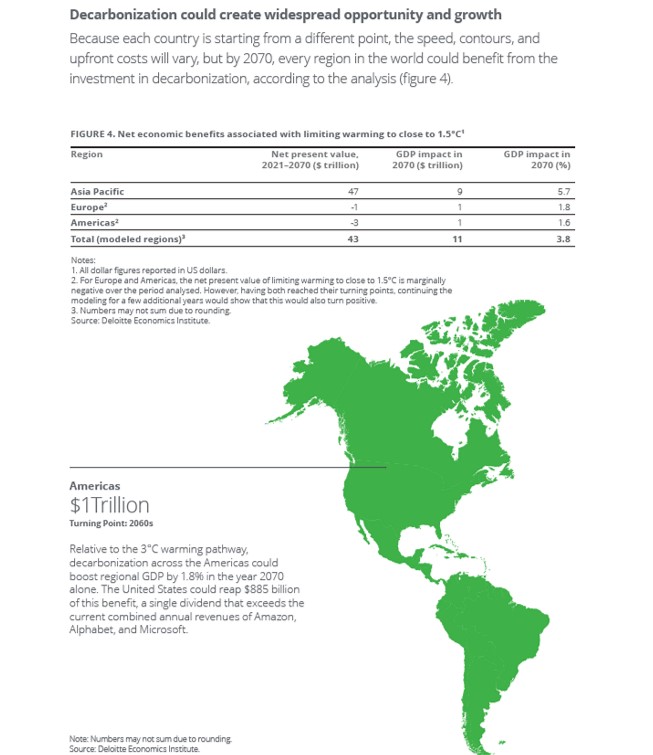 A peak linked to climate change in the gravity and frequency of overwhelming heat episodes, large forest fires, and strong precipitation is already happening around the world. These disasters have considerable effects, as the heatwave in India and Pakistan started in March and led the Indian government to stop wheat exports due to a drop in production.

These tendencies occur while the planet has only warned about 1.1 ° C (1.98 ° F) since the start of the industrial revolution.

While the globe is currently on the right track for warming at least 3 ° C by 2100, unless rapid and steep reductions in greenhouse gas emissions, much greater impacts are practically guaranteed.

The authors of the Pradeep Philip and Claire Ibrahim report have outlined the key item here:

"A lack of action to mitigate climate change is a political choice that can be made. But this insufficient action is a choice that has a high cost.

Ultimately, every company knows that the investment takes time to generate feedback, but without investment, you cannot grow. It is the same thing for the way we should think of the path to net-zero for our economy. "

We always have to follow the money, so this is indeed noteworthy!

Yes, You're right Matt.  In fact, the more the financial sector will be in this important undertaking, the more we'll see the implementation of sustainable solutions accelerating!

The financial sector is clearly attempting to line their own pockets at everyone else’s expense by flaming the “climate change” hysteria.
The issue remains conjecture that does not require panic. Turning energy into a luxury item (like in California) significantly lowers everyone’s living standards for no good reason.

I don't see these guys as financial sector "Climate" hysteria promoters, but they are clear as the majority of the other big corp in the sector:

1) Exxon https://corporate.exxonmobil.com/Sustainability/Environmental-protection/Climate-change ("We believe that climate change risks warrant action and it’s going to take all of us — business, governments and consumers — to make meaningful progress.")

2) Chevron https://www.chevron.com/sustainability/environment/energy-transition ("We believe the future of energy will be lower carbon, and we intend to be a leader today and in that future. We will accomplish our energy transition goals with our strong governance, risk management, business strategy, and climate policy principles coupled with actions and investments.")

It's urgent that we take care of this real challenge, not only for the financial and the energy sectors but for the people.

The financial sector clearly sees “climate change” as essentially a risk-free investment opportunity, hence their promotion of the issue. More or less what they have always done to induce folks to give them money; the specific promotional issue really does not matter.