Uranium producers should not expect initial core orders from post-merger Duke Energy for any of the six 1,150 MW reactors planned by pre-merger Duke (NYSE:DUK) and Progress Energy, for at least the next decade—if ever.

It appears the nuclear renaissance is evaporating in the new utility’s service area like a chunk of dry ice on a hot summer day.

Just prior to the closing of the merger, Progress delayed the start of two new reactors at a greenfield site in Levy County, Florida, by three years to 2025. The cost of the units has spiraled into the stratosphere, now coming in at $19-24 billion which includes an “all in” cost of new transmission and distribution infrastructure.

Consumer groups and the Public Counsel of the Florida Public Service Commission are convinced the units will never be built and oppose any new rate increases under the state’s CWIP law to pay for licensing work.

Meanwhile, Duke is unlikely within the next decade or longer, or ever, to build two new reactors at Progress’s Harris site in North Carolina, stating that electricity demand in its market is far down from pre-recession levels. The future of the Lee plant is also a question since Duke has stated it is interested buying a 500-MW equity share in Scana’s new AP1000s in South Carolina.

Worse for Duke is that it is now the majority owner of the troubled Crystal River reactor, with its broken containment structure and expected repair costs of well over $1 billion. Those costs will now be borne by Duke’s shareholders.

Johnson Out, Rogers In

This is a big merger. The new Duke Energy has a market capitalization of $49 billion and total assets of over $100 billion. It serves 7.1 million customers in North & South Carolina, Florida, Indiana, Kentucky, and Ohio. Total operating revenues in 2011 for the two firms were $23.4 billion.

Duke and Progress closed on the deal July 2 in which Progress, including its debt, became a wholly owned subsidiary of Duke Energy. Duke CEO Jim Rogers is CEO of the combined entity, a switch from the merger plan which saw Progress CEO Bill Johnson leading the new utility.

Less than a day after the deal closed on July 3, Johnson was voted out by the new board of directors, his fall softened with a $44 million golden parachute that includes $10 million in cash. Three senior Progress executives quit in protest over the ouster, including the company’s chief financial officer, Mark Mulhern. The sudden CEO swap gave Progress shareholders and the regulatory commissions in North and South Carolina a whiskey tango foxtrot moment. 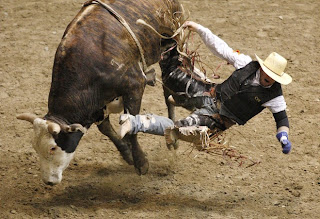 The Wall Street Journal reported July 10 that Standard & Poor’s put the company on its CreditWatch list with negative implications, citing “puzzlement over the executive change.”

The board was also worried about disappointing earnings at Progress, he said, and the poor performance of the company nuclear plants, including Crystal River.

While some ratepayer groups and investors have called on the North Carolina Utilities Commission to roll back its approval of the merger, there is little precedent for it to do so.  The Commission continues to call executives from both companies to testify on exactly what they knew and when about the executive changes and the condition of the Crystal River reactor.

On an aggregate level the merger creates the nation’s third largest nuclear fleet of operating reactors (see sidebar, above). Prior to the merger, Duke had seven reactors and Progress five. According to Nuclear Regulatory Commission numbers, those 12 reactors total 11.3 GWe in operating generating capacity, or about 19% of the new utility’s 58.2 GWe power total. Put another way, Duke Energy now has more nuclear generating capacity than Sweden. 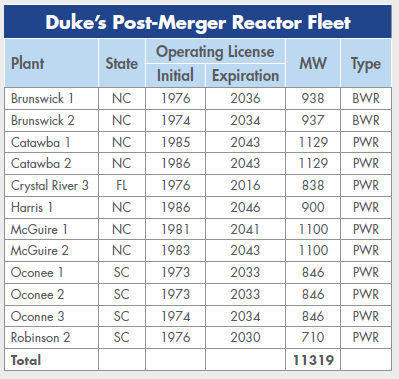 Duke does not own 100% of all the reactors in its fleet. Based on ownership, Duke controls 9.5 GWe of nuclear generating capacity.

According to Duke spokesperson Tom Shiel, the firm owns 91.87% of the troubled Crystal River plant.

The new Duke Energy has plans to build a total of six Westinghouse AP1000 reactors at three sites on the books. However, the firm is in no rush to start much less complete any of them.

The current recession, which began officially in 2008 and seems to have no bottom, crushed economic growth in the utility’s service areas, especially manufacturing, and flattened demand for electricity.

At the same time, domestic production of natural gas is priced at historic lows, less than $3/Mbtu, and is expected to remain at that level for a long time.

It is unlikely there will be construction starts for any of the new reactors until the utility sees long term gas prices north of $6 to $8/Mbtu. On the other hand, a case in favor of moving ahead may include the fact that both North and South Carolina are regulated markets with CWIP laws in place.

Replacement of aging coal plants facing expensive pollution upgrades could also be an incentive to build the reactors. However, the utility may have alternatives if the price of gas stays low enough over the long term. Another choice, after 2020, may be swapping out coal fired boilers with SMRs in the range of 100-300 MW each.

South Carolina, which is smack in the middle of Duke’s service area, has become a hotbed of development work on small modular reactors. Scana, which is building its own twin AP1000s, has signed agreements in principle to take power into its grid from any SMR that gets licensed and built at the federal Savannah River Site, where several vendors are starting work.

Crack Up at Crystal River

After the Duke-Progress merger was announced last January, there was speculation that the repairs to the damaged concrete containment structure at Progress’s Crystal River reactor in Florida, which are expected to cost over $1 billion, could be a deal breaker.

That didn’t happen, but investors have questioned whether repairs to the plant are worth the price tag. Also, conflicting media reports indicate it is unclear how much and when Duke learned about the repair costs at Crystal River and the true scope of the problem. The reactor has been shut down since 2009.

An anti-nuclear group, NC Warn, issued a press release on June 14 in which it reports, from anonymous sources, that Duke’s board of directors ordered an independent engineering study of the situation at Crystal River.

According to NC Warn, the study, which is said to have involved a team of several dozen experts, came to conclusions that cast the case for repairs in negative light. Jim Warren, a spokesman for the group, told FCW he believes the source is a group of investors worried about the effect of the repair costs on the finances of the new combined firm. Warren said that one concerns could be that Duke knew more than it disclosed about the repair costs but went ahead with the merger anyway.

Duke spokesman Tom Shiel told FCW “we are certainly evaluating the plant just as we would any other asset.” He dismissed allegations by NC Warn about Duke’s pre-merger review.

Subsequently, the Tampa Bay Times reported the Duke board reviewed an independent assessment of the situation at Crystal River on June 25. The report has not been made public, but may come out in hearings called by the North Carolina Utility Commission about the merger’s switch in CEOs.

Progress has claimed the repairs, and a 20-year license extension due in 2016, provide a better return on investment, and no debt, compared to building new reactors. Progress maintains in a rate deal it inked with the Florida Public Service Commission earlier this year that it can repair Crystal River and have it back in service by 2014. An engineering study being conducted by Progress expected to spell out repair steps and costs is due by the end of 2012.

Another deadline is looming for the Crystal River plant and that is its NRC license expires in 2016. If the utility cannot repair the containment structure by then, it is unlikely the regulator will approve a license extension.

J.R. Kelly, the Public Counsel for the Florida Public Service Commission, told the Tampa Bay Times July 5 that he thinks Progress should decommission Crystal River and build a natural gas power plant in its place. Kelly has also been outspoken that Progress should cancel its plans to build the Levy County reactors due to their escalating costs.

By the Numbers: The New Duke

The Duke-Progress merger creates a fleet of 12 reactors, making the new Duke the third largest in the nation behind Exelon and Entergy.

The combined total generating capacity of the units, according to the Nuclear Regulatory Commission, is 11.3 GWe. Duke’s ownership shares of the reactors is 9.5 GWe.

Significantly, except for Crystal River, all of the reactors have completed their NRC license renewals.
The earliest plant to be retired is Robinson 3 in 2030 and the latest is the Harris reactors in 2046.

Four of the reactors have licenses that expire after 2040.

It is going to be a long time before Duke needs to replace any units in its current fleet.

Levy The plan by Progress to build two new AP1000s on Florida’s west coast now sees operations starting in 2025 at a cost of $19-24 billion. This is a three-year delay and a cost increase of $2 billion from previous estimates filed with the Florida Public Service Commission. With these changes, it is clear Progress is in no hurry to finish the licensing process. Yet, Levy County is the only one of the three new build projects to have an EPC contractor in place.

Harris  Plans by Progress to build two new AP1000s at the Harris site in North Carolina indicate completion dates of 2026. Progress said earlier this year that it does not see a need for more than 25% of the 2,200 MW of power that the units would provide, given vastly decreased electricity demand. These units are the least likely to ever be built by the new Duke Energy utility.

Lee  Prior to the merger, Duke Energy said it would complete two new AP1000s sometime after 2020 at the William States Lee III site in South Carolina. It is unclear where this project stands. Duke has held talks with Scana about buying a 500 MW equity share of the two new AP1000s being built at the V.C. Summer station in South Carolina, which could further postpone plans for Lee.