There is a hallowed tradition in Washington known as the “Friday Document Dump,” in which news and announcements the government wishes to bury are strategically timed for Friday afternoons, when such announcements tend to fall through the cracks of the typical news cycle (i.e., assuming reporters are even present to cover the event, the strategic timing tends to ensure it will miss the weekend papers, thus effectively “burying” the story by the time the new week rolls around). 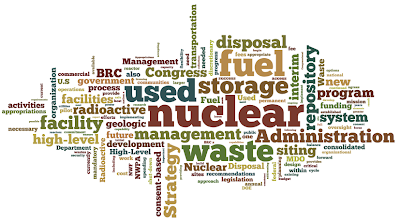 In this storied tradition, the Department of Energy released the Obama administration’s response to the Blue Ribbon Commission report last Friday to relatively scarce media coverage. In fact, one would be hard-pressed to find any coverage in many of the major papers; what little coverage there was can be found in the Washington Times, Platts (an energy publication), and the Las Vegas Review-Journal. (Needless to say, the timing appears to have had its intended effect).

AREVA’s NextEnergy blog and Nuclear Diner have already posted some of their thoughts on the release, but after reading the DOE’s report I have to say I’ve felt a bit underwhelmed. As a friend remarked, it’s a document “laying out the next set of milestones for the nation’s spent fuel management program to miss.” I wish I could say he was joking.

Some of the major highlights:

Much of the above points are relatively familiar, essentially retreading what has already been detailed in the original BRC report findings (thus begging the question of why a 14-page response would take so very long). And, for the most part, the BRC findings, translated to the DOE report, are not bad findings – however it’s hard to find where the DOE’s report has added much at all to the discussion aside from a blanket endorsement.

Perhaps to the disappointment of the AREVA (who emphasized reprocessing as a viable fuel cycle strategy in their blog response), the report seems to go out of its way to minimize the potential role of reprocessing in a future U.S. fuel cycle strategy – in fact, one point which stuck out to me was in that the DOE report recommended that the scope of the waste management organization (referred to as a “management and disposal organization, or “MDO” – because if there’s one thing Washington loves, it’s acronyms…) should be explicitly constrained to explicitly exclude reprocessing. Here’s the relevant quote:

In addition, the mission of the MDO will need to be carefully defined. For example, funding made available to the MDO should be used only for the management and disposal of radioactive waste. While this could include the management and disposal of waste resulting from the processing of defense materials, the MDO itself should not be authorized to perform research on, fund or conduct activities to reprocess or recycle used nuclear fuel. These limitations on the MDO mission are consistent with the recommendations of the BRC.

Thus, it would strongly indicate a commitment to a once-through fuel cycle for the time being. Among other factors cited to support this decision was ORNL research I’d highlighted in my previous post, which indicated that most of the current used nuclear fuel inventory (98%, in fact) could be consigned to direct disposal even assuming a future closed nuclear fuel cycle.

With respect to the emphasis on interim storage, I have to admit to having a somewhat adverse reaction while reading the report – namely because of the jarring disparity between words and deeds. In particular, such a ready-made pilot facility for interm storage based upon local consent has already been proposed – Private Fuel Storage. PFS existed as a consortium of nuclear utilities; it negotiated a contract with the Skull Valley Band of the Goshute Indian Tribe located in Utah (located about 70 miles SSW from Salt Lake City).

PFS had been attempting to open a privately owned and operated interim storage site for over ten years (it first filed a license application with the NRC in 1997); in the process, it has been a political football of multiple administrations in the ongoing battle over Yucca Mountain. Ultimately, PFS received an operating license from the NRC in 2006, yet various shenanigans from both the state and federal level prevented it from ever opening. (The Bureau of Land Management refused to allow for the expansion of a rail line to ship fuel to the reservation, and the state of Utah continued to block any shipments of spent fuel canisters to the site along Utah highways. Despite the fact that as a Native American tribe the Skull Valley Band is legally autonomous from the state of Utah, the state government found plenty of other ways to frustrate the intentions of the Goshute Tribe and PFS.)

Roughly two weeks before the DOE report was released, PFS finally announced its intention to withdraw its license from the NRC – namely because it was clear that the process was going nowhere (and licenses aren’t free). Thus, a jarring chasm between word and deed – clearly, a pilot interim storage site already existed – one which had the consent of the local government (in this case, the Goshute Tribe); however, the Obama administration has shown little inclination to intervene. One is left to wonder then how any other future site could hope to get off the ground when a ready-made solution such as this one is abandoned to state-level sabotage; one can easily see such a scenario playing itself out with states blocking shipments to interim sites located outside their borders based on the Utah example.

Particularly depressing about the overall strategy is in its relative lack of ambition; a planned operating date for an interim storage site which would happen a mere 27 years after the original timeline obligated by the Nuclear Waste Policy Act (and 43 years after the act was first passed), with no repository in sight until I (a relatively young and spry individual at the present) am poised to retire – a full 50 years past the original deadline. (Only in the federal government is one allowed to miss a deadline by a full half-century with a straight face.)

I will be the first to say that the 1987 amendments to the Nuclear Waste Policy Act which ultimately decreed Yucca Mountain as the nation’s sole geologic repository by virtue of legislative fiat was a mess. But the warmed-over copy-‘n’-paste job combined with completely lackluster goals for siting a repository look like rather unseemly indicators that Obama administration’s approach to the BRC process was essentially that of a stalling tactic, following their contentious decision (both politically and legally) to cancel the Yucca Mountain project. If one is to unilaterally dismantle nearly three decades of standing policy of nuclear waste disposal policy, a little more should be expected in terms of an alternative. The DOE report would not be it.

I totally Agree Jim.  Just another job creation act for the government that does nothing to get at the root of the problem.  What a waste of our tax dollars.