Already Member? Sign In.
Forgot your password?
New to Energy Central?
Applying for membership with Energy Central allows you to connect with a network of more than 200,000 global power industry professionals.
Apply today, it's free!
As American government seek out the best industries to invest shrinking public funds for the biggest return on investment, one economic sector offers the most bullish outlook around – the smart grid.

During a period of stagnant economic growth, the impact of ARRA’s smart grid investments shines like a beacon. According to the report, nearly $3 billion in combined smart grid project funding generated at least $6.83 billion in total economic output. 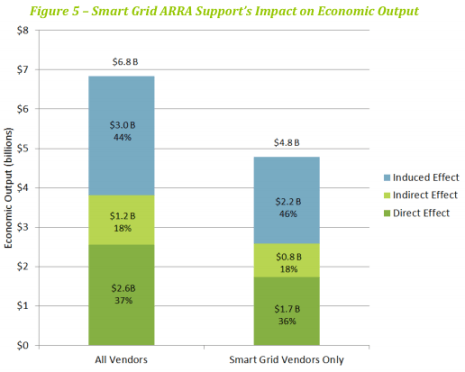 So just how did ARRA investments in smart grid projects create so much economic activity? The answer is pretty straightforward – jobs in the smart grid industry are stable, pay higher wages, and ripple throughout the overall economy by creating demand down associated supply chains and across other service sectors.

Since economic output and GDP can be esoteric, the full impact of smart grid funding is best understood through actual jobs and paychecks. Approximately 47,000 full-time jobs were supported by ARRA grants, including both newly created jobs and existing jobs that would have been lost without the investments. 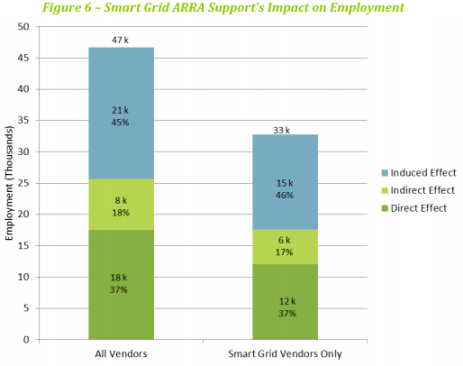 Economic Activity Trickles Down To Other Industries

Interestingly, the economic activity initiated by those smart grid jobs then spread across other industries. Of the 47,000 total jobs cited, 18,000 were supported by direct investment (meaning the grant money helped pay a worker’s salary) but 29,000 jobs were supported by indirect and induced economic activities (meaning smart grid company revenue and worker salaries were then spent across the broader economy).

When non-core smart grid industries are included, ARRA investments created nearly $2.9 billion in overall labor income. These indirect and induced economic activities supported 2,500 jobs in the restaurant industry, 1,500 jobs each in the healthcare and real estate service sectors, and 1,000 jobs each in the financial services and high-end manufacturing industries. 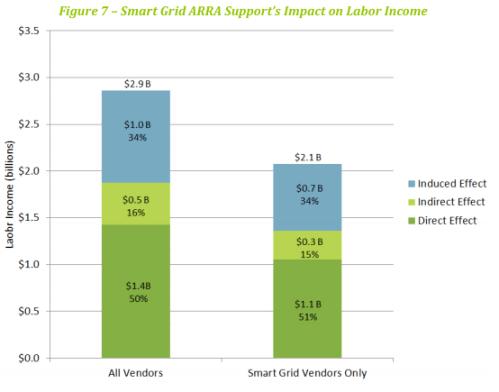 DOE’s analysis concludes employment in these ancillary service industries is almost entirely due to induced impacts as income across core and value chain smart grid companies trickled down to boost related consumer spending. 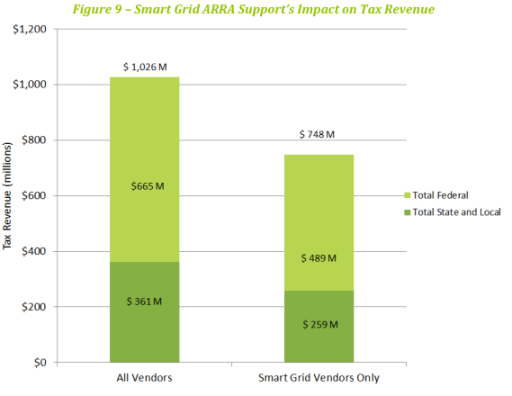 This tax revenue was geographically diverse, with $361 million in state and local tax revenues spread across multiple regions, primarily generated by sales and property taxes – again showing the GDP magnifier effect across the larger economy.

While all these figures add up to an incredible return on investment, we’re probably only seeing the tip of the iceberg. ARRA programs are still underway and by the time SGIG and SGDP funds are fully spent, an additional $2.5 billion in federal funds and $4.1 billion in private sector funds will be invested into smart grid projects across the country.

Exhibit A For Green Job Growth

These ongoing follow-up investments paid for by government, ratepayers, and firms will likely function as a catalyst to sustain the smart grid industry and continue generating high-tech, green collar jobs as America’s grid moves toward modernization.

So at a time when Congressional Republicans are pressing DOE to prove ARRA funding actually created jobs, America’s smart grid industry stands out as an example of how clean energy investment can strengthen our country and economy. Hopefully this report will be Exhibit A in DOE’s ARRA defense.

DOE Smart Grid Funds Created $6.8 Billion Economic Boost, 47,000 Jobs was originally published on: CleanTechnica. To read more from CleanTechnica, join over 30,000 others and subscribe to our free RSS feed, follow us on Facebook (also free!), follow us on Twitter, or just visit our homepage (yep, free).