Do hominoids dream of solar sheep?

Everybody has a favorite topic to bring up at parties when someone who knows them only vaguely and can’t remember what line of work they’re in seeks clues by asking, “So what have you been up to lately?”

“Advocating for offshore wind!” I used to respond brightly, which is why I wasn’t that popular at parties even before the pandemic.

But I got my longed-for turbines when Virginia Governor Ralph Northam and Dominion Energy committed to developing 2,600 megawatts of offshore wind by the middle of this decade.

So now I’m campaigning for another cutting-edge technology, or rather, for a cutting-edge combination of otherwise familiar technologies. I’m talking about agrivoltaics. For those of you not in the know, agrivoltaics refers to using land for solar panels and farming purposes at the same time. The “construction footprint” of solar—that is, the amount of land at a solar facility that is taken up by infrastructure and can’t be used for anything else—is less than 2%. The rest is up for grabs.

Consider one approach. At most utility-scale solar facilities, the ground under and between the rows of solar panels is planted in grass, which has to be mowed periodically. Instead of paying a maintenance crew to come through with lawn mowers, why not hire sheep to do the lawn care? The sheep do a better job at less cost, the shepherds get fresh pasture for their flock, and the soil gets nicely fertilized.

(Sheep, it turns out, are the grazers of preference. Cattle like to rub up against things that ought not to have 1200-pound animals rubbing against them, and goats—well, they’re goats: they eat the wiring.)

I admit I have no personal knowledge of this, since I live in wooded suburbs with neither solar panels nor sheep. The closest I get to country life is owning a dog of the farm collie variety. And she shows no talent for herding, though it’s possible she is just not in her element. Five years after arriving here from rural South Carolina, Ellie has still not gotten over her indignation at having been “rescued” by a family without a farm.

Actually, I recently toyed with the fantasy of moving to a farm, which is such a COVID cliché that I apologize for mentioning it. But if my fellow residents of Northern Virginia haven’t done this yourselves, you will cry in your morning latte to learn that for the price of the average home in the D.C. area, you can buy hundreds of acres of open space elsewhere in Virginia, typically with a house thrown in. Alas, not a single listing mentioned suitability for solar, with or without sheep, and when I caught on that they didn’t mention internet access either, my enthusiasm waned.

So what I know about solar sheep comes mostly from the American Solar Grazing Association, which I urge you to check out because it is by far the cutest professional organization I have ever belonged to. Most of the projects it highlights are small in scale, given that the partnership between solar developers and shepherds is a new one. Still, the partnerships work because they save money for solar project owners and earn money for graziers.

A few Virginia farmers and developers have shown it works. The 3-megawatt Bedford Solar Farm has used sheep as the primary means of vegetation management since beginning operations in January 2018. Sheep are also on the job at the 1.3-megawatt solar facility at Carilion New River Valley Medical Center near Roanoke. The project owner, Secure Futures LLC, argues for the economic and environmental benefits in an enthusiastic blogpost (but beware of the b-a-a-a-d puns).

For others, the bigger benefit comes in community acceptance. The more a solar facility looks and operates like an agricultural use, the easier it will be to integrate it into the rural landscape. If we want Virginia to succeed in its quest to decarbonize our electricity supply, we need more solar. We need much more of it on rooftops and parking lots and closed landfills, but we also need the big projects. The carbon math just doesn’t work otherwise.

Virginia’s solar industry is young, but developers already report difficulty in securing permits for projects that require hundreds or even thousands of acres. The industry sweetened the pot this year by supporting laws that provide extra revenue to counties in exchange for hosting projects. But solar was already a good deal for county government and landowners, producing more revenue for both than farming alone. The people putting up a fuss are the neighbors. 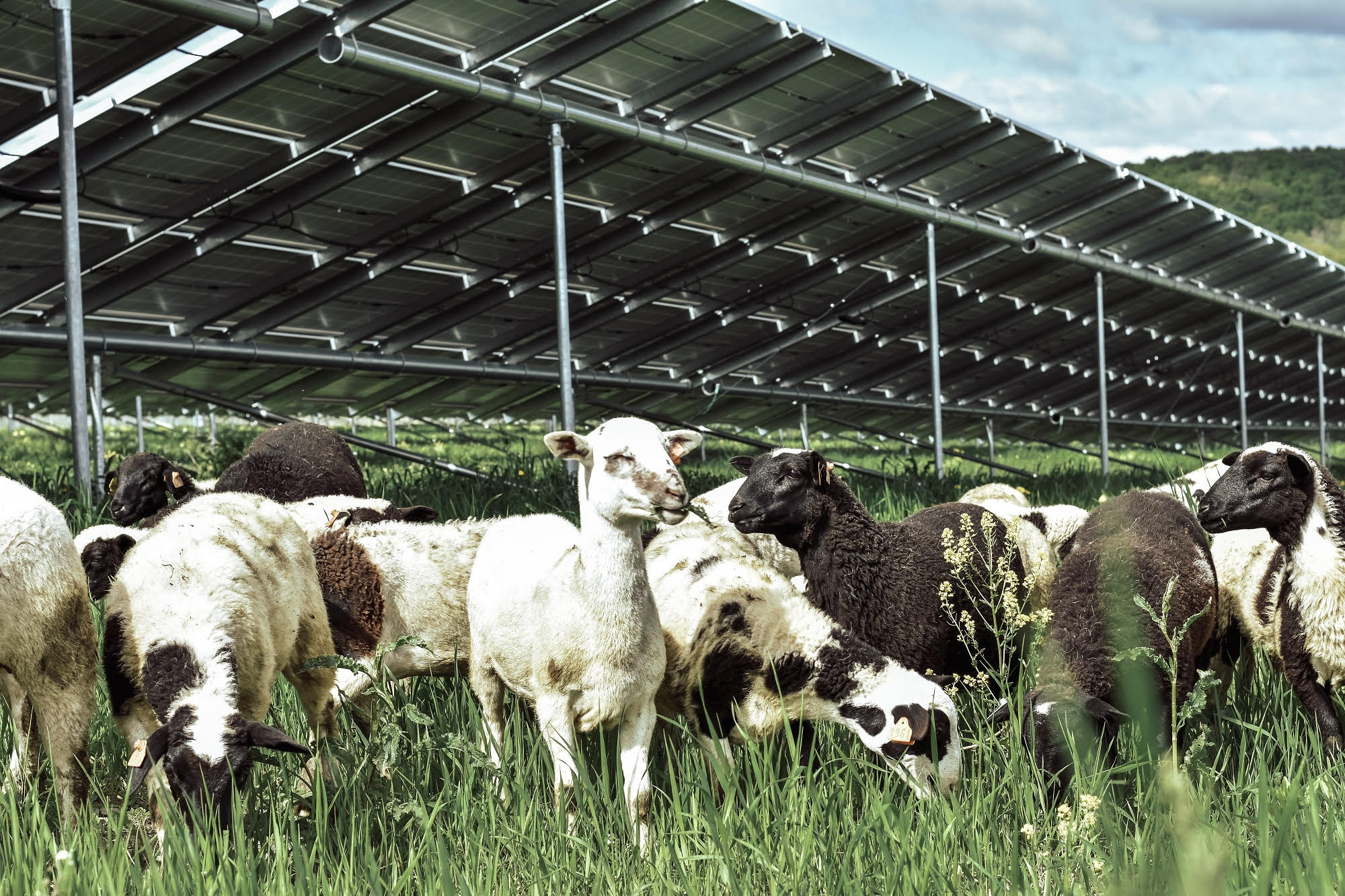 I’m not terribly sympathetic to these folks. Virginia has lost way more farmland and forests to subdivisions than it ever will to solar projects, including the subdivisions many of those complaining neighbors live in (looking at you, Fawn Lake!). Land that is carved up and paved over never becomes a field or forest again, but solar is a temporary use; when the lease is up, the panels and their supports are taken away, and an open meadow remains.

As for concerns about losing land that was growing food, we need to keep in mind that more than 30 million acres of U.S. farmland is largely wasted today growing the 40 percent of U.S. corn production that gets processed into ethanol for mixing with gasoline. Solar is not competing with food.

But it isn’t me who has to be persuaded, it’s the people who show up at public hearings to oppose what they regard as some kind of industrial eyesore. They don’t care that leasing land for solar may be what lets a family hold onto their farm. They don’t want to look at it.

So developers, and the utilities who buy the projects from them, have to do more to make themselves welcome by offering other benefits. It doesn’t have to be sheep. Some developers offer wildlife-friendly fencing and set aside land for walking trails. Another especially welcome trend is for facility owners to plant native wildflowers in place of grass to support bees and other pollinators.

If sheep don’t move you, pollinators should. We are in a biodiversity crisis as well as a climate crisis, and populations of native bees critical to pollination of many food crops are in steep decline. So why not make use of the space under solar panels to strike a blow for bees? Neighboring farmers also benefit, because studies show that attracting insect pollinators increases yields of food crops grown nearby. A study from Yale University found additional benefits, including the cooling effect of native plantings that increase solar production.

Minnesota and Maryland are leading the way in formalizing programs with guidelines and incentives for pollinator-friendly solar facilities, but Virginia is also out front on this topic. The Departments of Conservation and Recreation (DCR), Mines, Minerals and Energy (DMME), and Environmental Quality (DEQ) created the Virginia Pollinator-Smart Solar Program and developed a scorecard to help local governments and solar developers understand how to achieve pollinator-friendly status. (Check out the terrific webinar from last April.)

Solar developer Sun Tribe announced it achieved the state’s first Gold Certified solar site under the program at Cople Elementary School in Westmoreland County, where the solar array sits on 4.3 acres. Small projects like this should be simple to replicate, but scaling up may be harder.

For one thing, the only large supplier of native plant seeds in our region, Ernst Conservation Seeds in Pennsylvania, projects that it would take up to ten years to build up enough stock to supply a robust utility-scale solar market. (Ernst also has a seed mix designed for those who want both pollinator plants and sheep among their solar panels; of course it’s called “Fuzz and Buzz.”)

The solar companies I’ve spoken with are enthusiastic, but they cite one other challenge: persuading their customers, including utilities, to accept sheep or pollinator plantings on site. So we may have to look to other kinds of customers for leadership: institutional buyers, corporations and government buyers — the kind of customers for whom social and environmental benefits add value beyond the cheap electricity they can get from solar.

I don’t imagine I will ever be able to give my dog a farm, with or without solar sheep, but I take comfort in the certainty that grazing, native plantings and other co-benefits will eventually become standard practice, simply because they’ll have to.

Meeting our energy needs sustainably means solar is going to become a visible part of our landscape. The job of the solar industry, its allies and its customers is to make that not just tolerable, but welcome. And for that, solar projects must offer more than energy.

This article originally appeared in the Virginia Mercury on December 11, 2020.