The global energy transition will lead to a massive expansion of power lines at all voltage levels as well as a steep growth in the number of transformers and substations in the electricity system. This is one of the major new findings of the second edition of the Energy Transition Outlook, the annual flagship publication of global technical consultancy DNV GL. As a result, grid costs will triple, yet this cost explosion is offset by cost reductions in other areas, such as lower costs in the fossil fuels sector. “The world can afford the transition”, say project leader Sverre Alvik and lead author Paul Gardner of DNV GL in an interview with Energy Post. “That’s the good news. But it’s not clear yet how we will make the necessary investments. How fast we go may depend more on political will than technology or economics.”

Last year, when DNV GL for the first time presented its Energy Transition Outlook (ETO), it had a surprising story to tell. The report came to the unique conclusion that somewhere in the mid-2030s, for the first time in recorded history, global energy demand would reach a peak and even decline thereafter.

What is important about this projection is that it comes from an independent source: DNV GL is a global, “technology-neutral” consultancy who are active across the entire energy value chain, both in electricity and renewables and in oil and gas.

What makes the finding even more significant, is that it is not part of some possible “scenario”. The ETO, Alvik explains, presents just one forecast of the future – not a number of different scenarios, as most energy outlooks do. And it is mainly based on cost comparisons, though including the effects of long-term climate policies. “We don’t hedge our bets”, says Alvik, who is head of Energy Transition research in the company’s head office in Oslo. “We say that this is where we see the world moving.”

For this year’s edition, Alvik’s team updated and refined the model and looked in more detail at some new topics, such as the possible role of hydrogen, and even more importantly, at the effects of the energy transition on power grids and grid costs.

Which led again to a major new insight: the expansion of power lines and transformers needed for the energy transition will be immense. Whereas today there are some 2 GW kilometres of power lines in the world (all voltages together), this will be over 7 million kilometres by 2050, as shown in this chart: 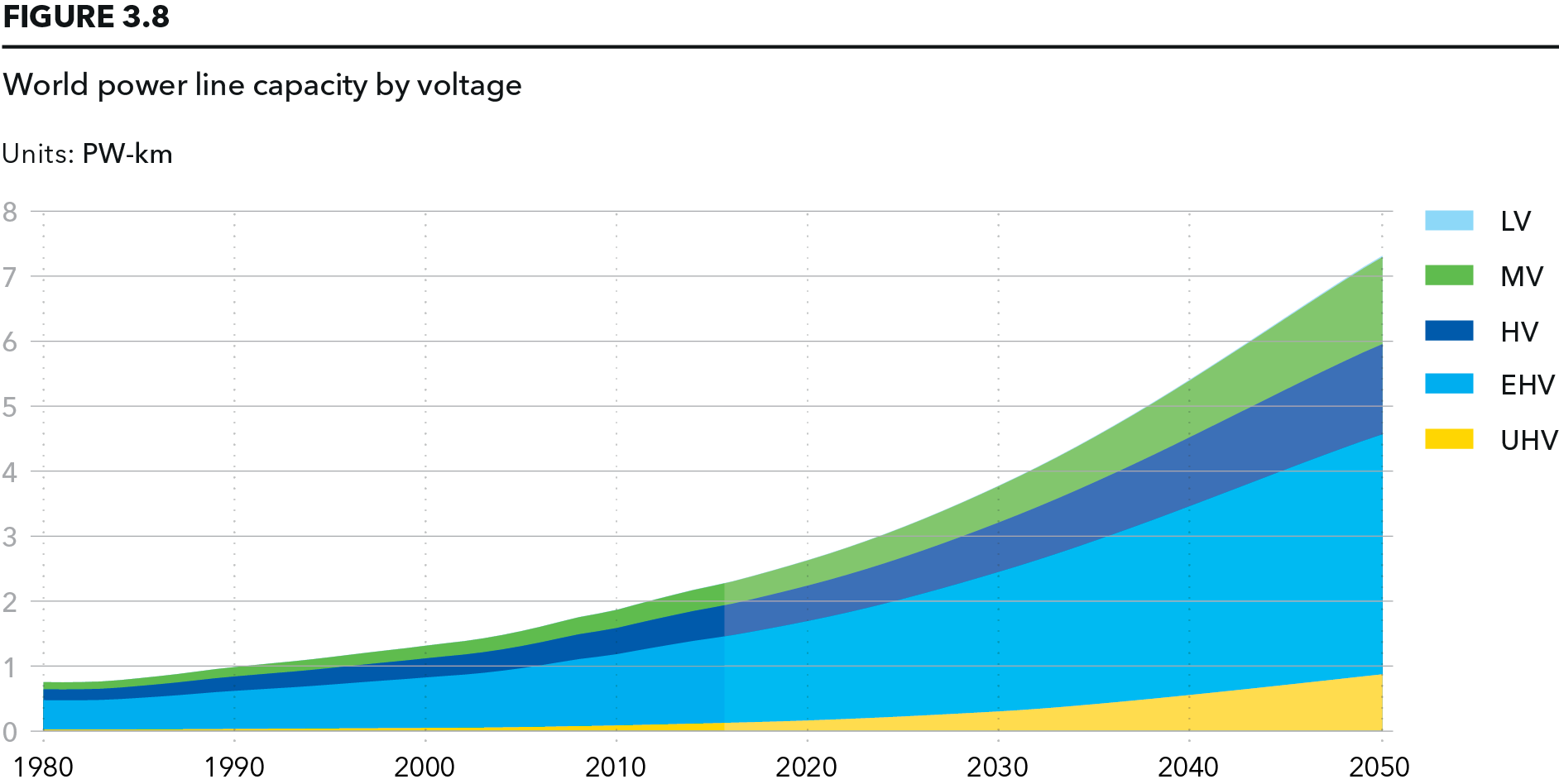 With regard to transformers, their installation rate will roughly double, and this expansion will start soon: 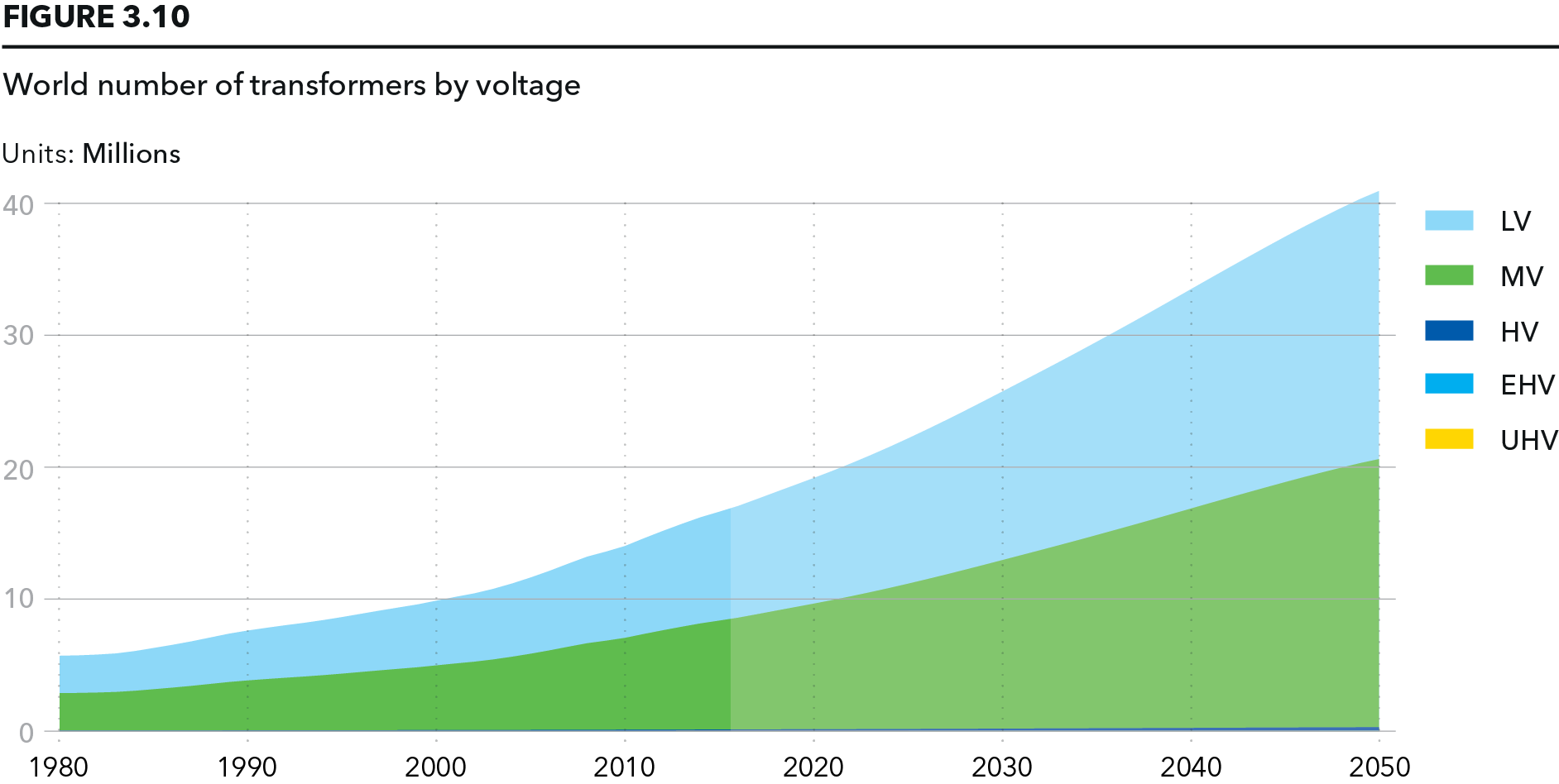 “We believe humanity will start using less energy from the mid-2030s on”, says Alvik, “partly because economic growth is gradually slowing, but also because of increased energy efficiency, which is not just caused by insulation and other efficiency measures, but mainly by electrification itself. An electrified system is a more efficient system. For instance, if you look at transport, electric cars have an efficiency of around 90%, cars with a combustion engine just 30%.”

That same trend – electrification – underlies the major expansion of grid infrastructure that DNV GL expects to happen. ETO sees electrification taking place in all economic sectors – buildings, manufacturing, transport – driven by the need for decarbonization. Electricity will grow from 19% of final energy demand in 2016 to 45% in 2050, replacing mostly coal and oil. At the same time, the share of renewables in the power mix will grow to over 80% by 2050 from a very modest base today: 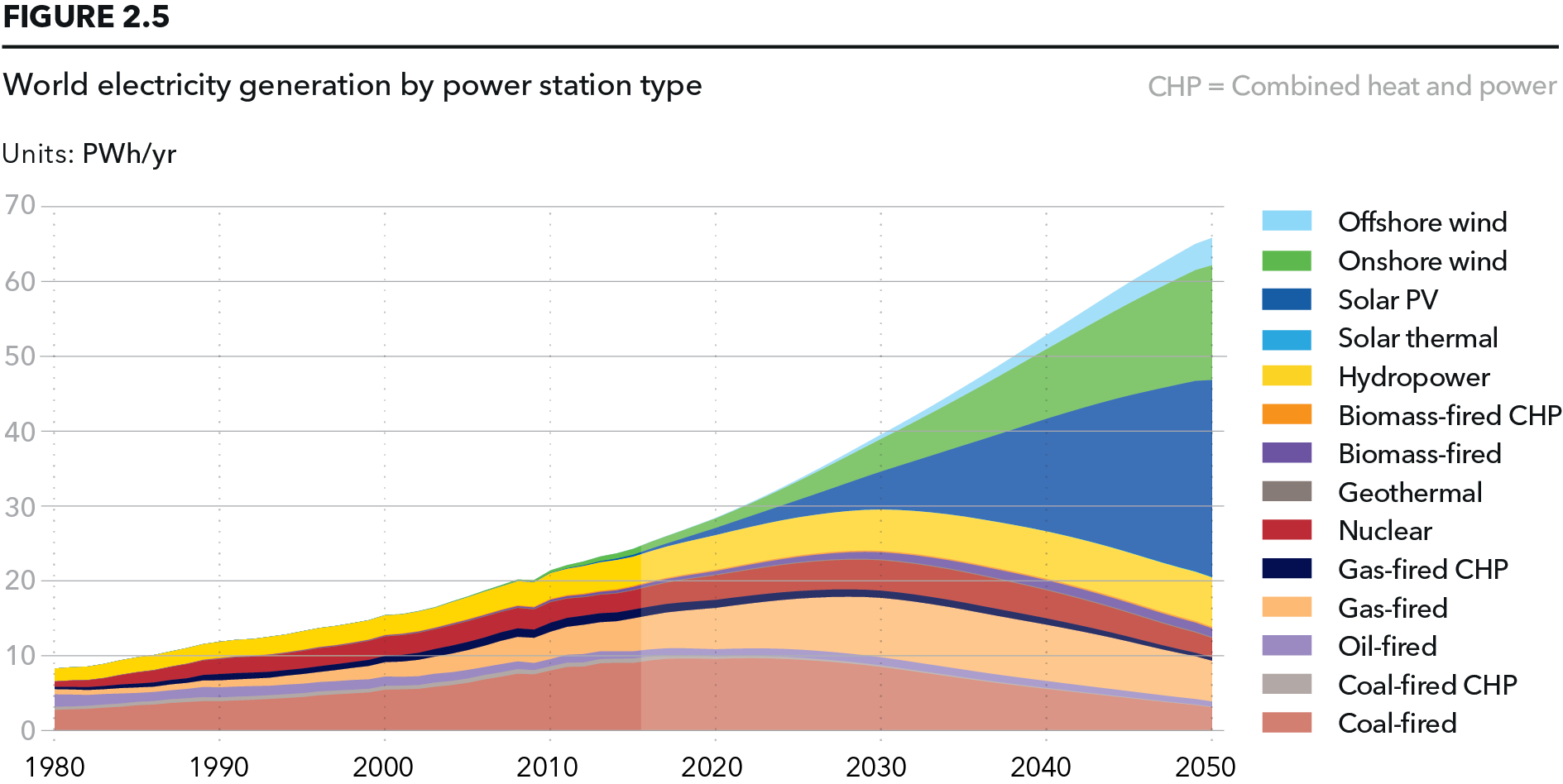 With solar (40%) and wind (29%) dominating the power mix in 2050, one might assume that the huge additional investment in the grid is needed to integrate these variable energy sources into the electricity system. However, this is not the main reason why the ETO projects a massive expansion of grid infrastructure, says Alvik.

“Most of the need for additional grids is simply driven by increased demand rather than by increased solar and wind. Think of the revolution in EVs, where we project that half of all new cars sold will be electric by 2027 in Europe and by 2033 for the world as a whole. But you can also think of the electrification of heating and industrial processes and an increase in air conditioning.”

Nevertheless, sceptics might find an argument against the energy transition in that, as the ETO shows, the electrification of the energy system will lead to enormous additional costs. Grid costs will triple by 2050, growing from some $400 billion/year today to a massive $1.4 trillion/year by 2050, according to the ETO: 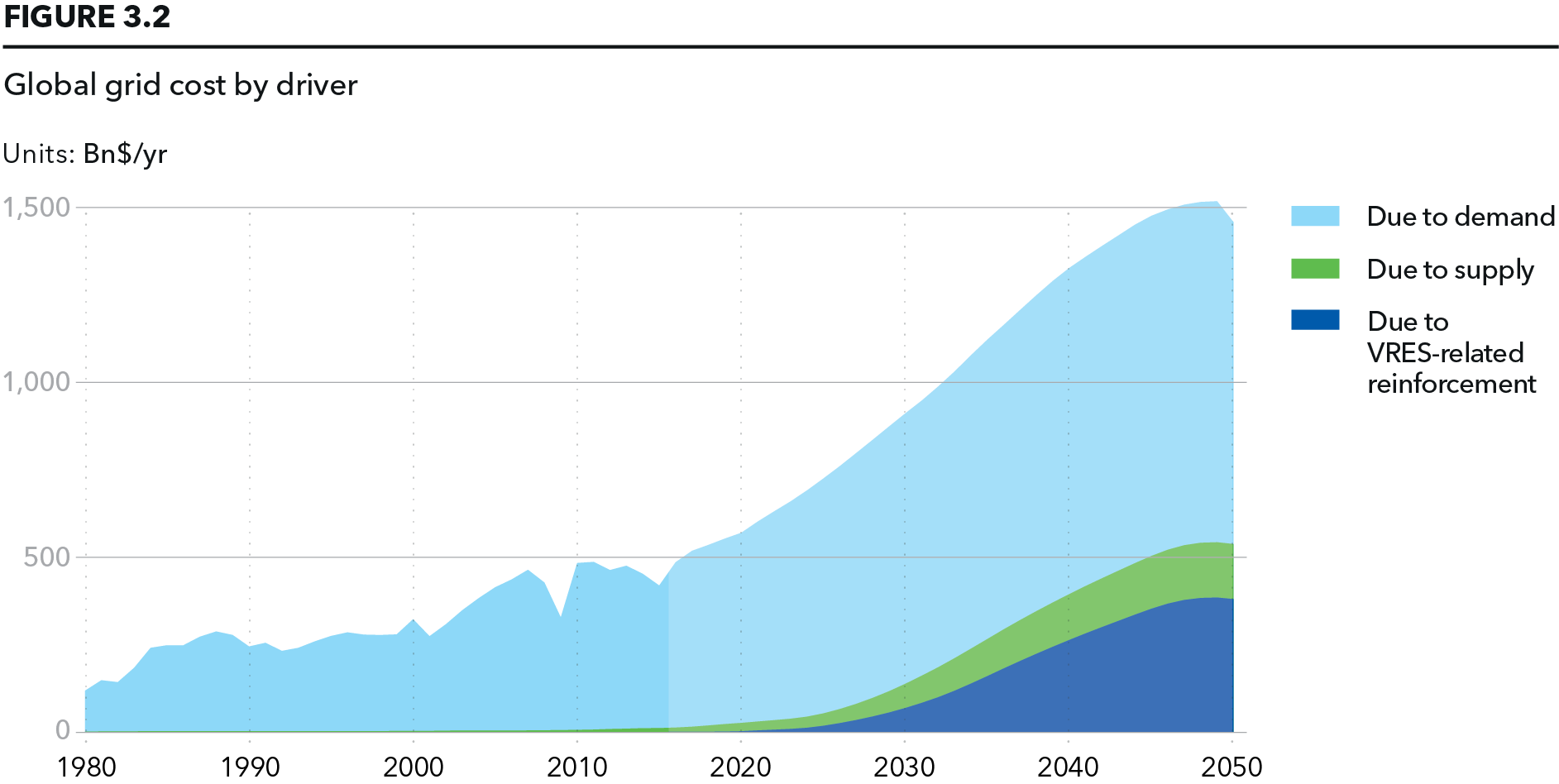 Capital investment (Capex) in particular will be large, especially for overhead power lines, whereas operational expenditures (Opex) will be relatively small: 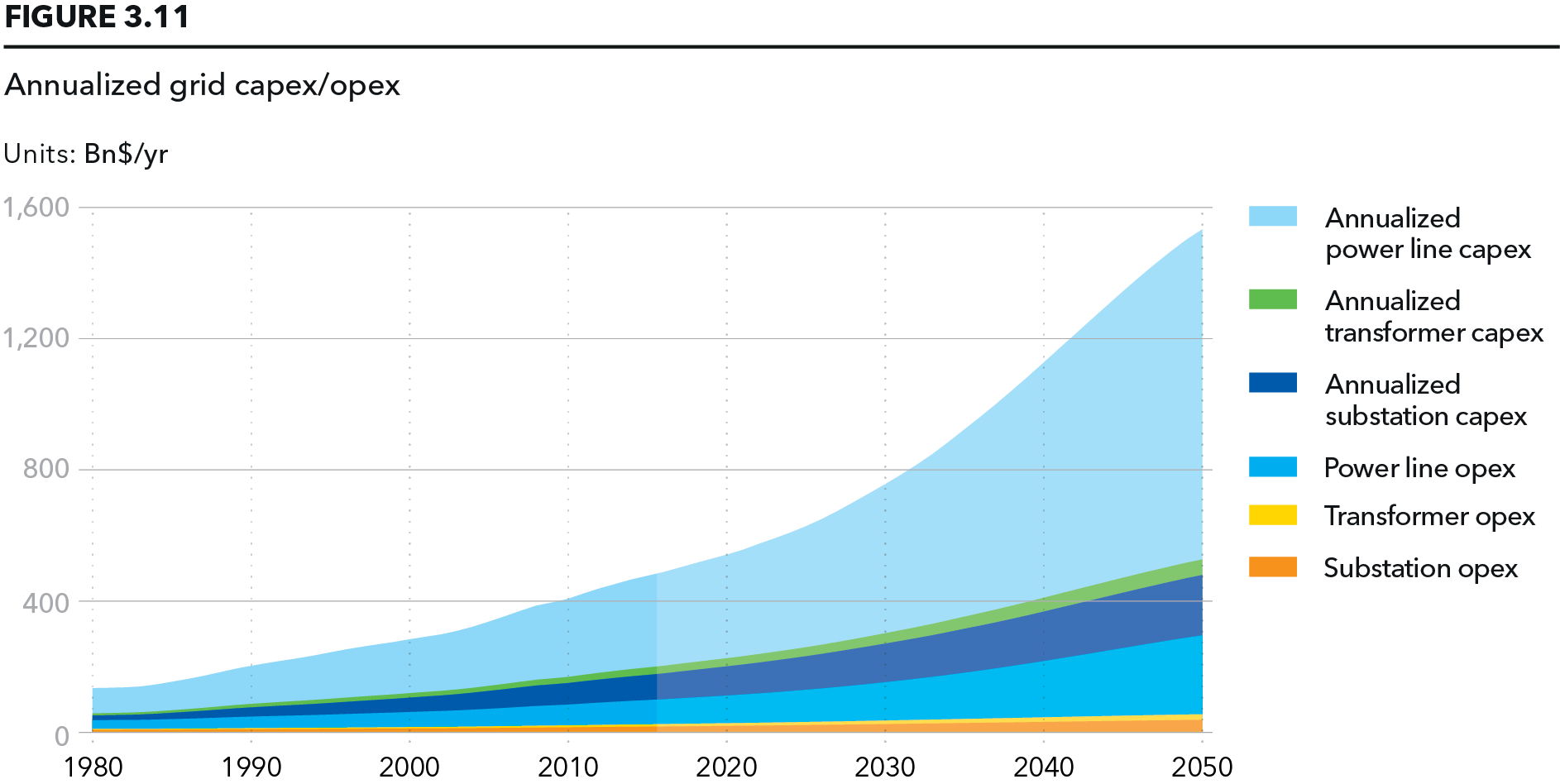 And yet, in a more basic sense, the sceptics would be wrong, notes Paul Gardner, segment leader energy storage at DNV GL and one of the lead authors of the report.

“Although CAPEX costs for power lines and for non-fossil generation each increase considerably by 2050, this is compensated by reductions in other areas”, Gardner points out. “The good news is that total energy costs will actually go down as a fraction of GDP.”

Fossil fuel expenditure, for example, will be much smaller in future. All in all, and as a result of GDP growth, the amount that the world will need to pay for energy-system expenditures will decrease from around 5.5% of global GDP today to around 3.1%: 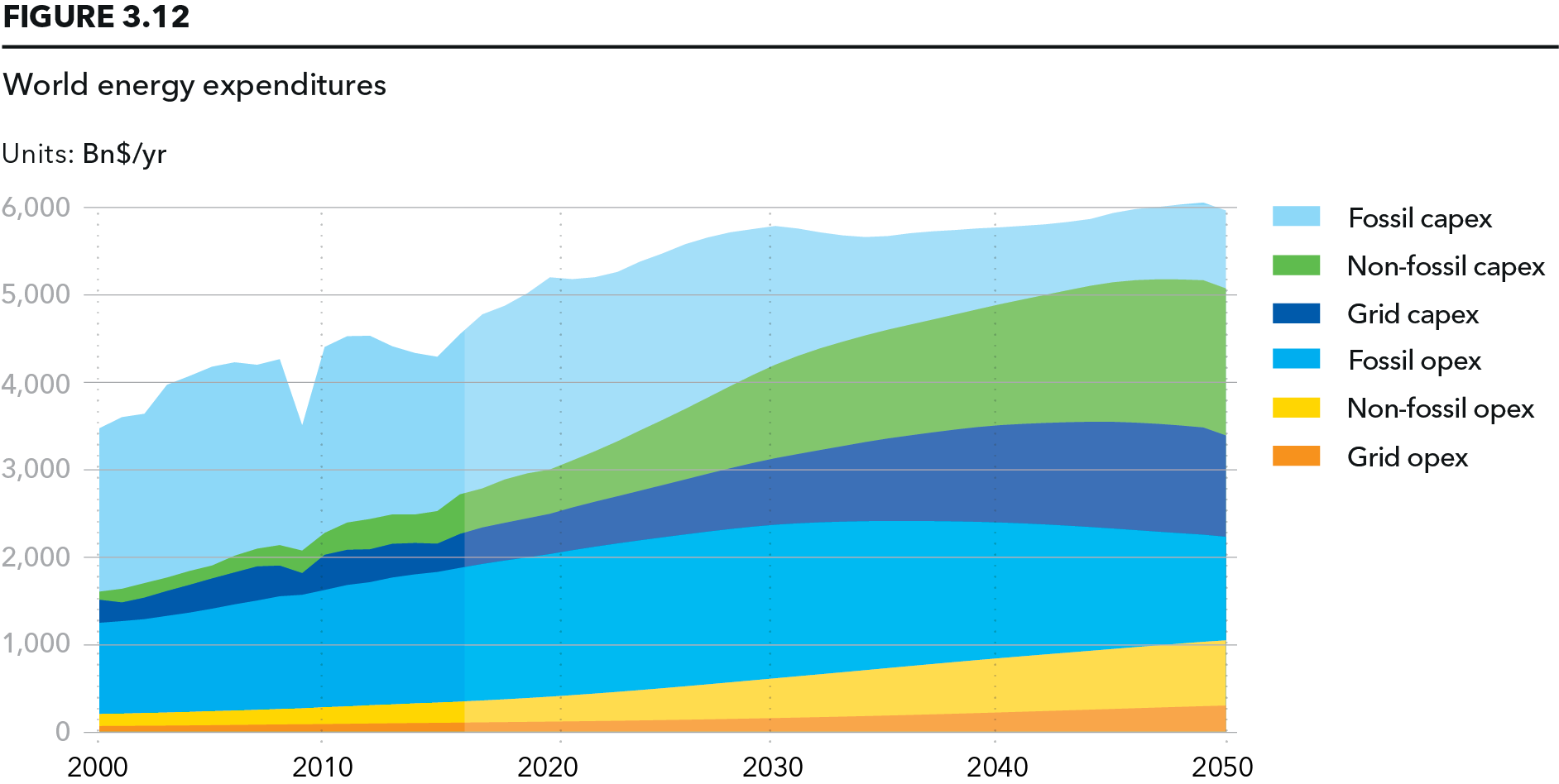 What about the integration of variable renewables then? Won’t this present a problem? “This will require some extra investment in wires, cables, substations, and so on,” says Gardner. “It will also require flexibility measures, such as demand response  and energy storage. But estimates of those costs are all included in the model.”

So from a macro-economic viewpoint, the ETO shows there are no reasons why we can’t have an energy transition based on decarbonization and renewable energy. Gardner does make one small reservation. “The model results show several regions getting to levels of wind and solar that are way beyond what we have seen so far. It is difficult to say how the system will cope with that. We have tried to make reasonable assumptions, but it’s complex. It’s possible that we end up with much more demand response, much more ability to adjust demand.”

If there are no insurmountable economic bottlenecks for the energy transition, what is there to stop it? Well, Gardner says, “it’s true the world as a whole can afford it, but costs will be incurred in different parts of the system, i.e. by different people than in the past. Right now much of energy investment is made by oil and gas companies. In future, it is electricity and infrastructure companies that will have to make the investments.”

Partly what may happen is that oil and gas companies shift to the electricity market, which is already happening. Yet, Gardner notes, the electricity sector is a different ballgame. It is much more regulated. It is also less international. “Grid operators are usually defined by their geography”, says Gardner. “They cannot spread their risks over multiple markets, as oil and gas companies can.” They are also much more politically driven. “Electricity is seen as a fundamental right in more and more countries.”

Thus a very big question mark emerging from the ETO, says Alvik, is who will take up the required investment, and even more, whether investors will be able to handle the increased risks in the system. Oil and gas companies are used to calculating risks. “Now network operators will have to make decisions on very big investments in highly uncertain circumstances. What complicates matters is that infrastructure represents a very long-term investment. This increases the risk of stranded assets.”

The somewhat unpredictable influence of regulation and politics increases the risks of investment in electricity grids. “It takes a long time to build a transmission line, but even longer beforehand to get it approved”, says Gardner. He believes there will be a big discussion about whether we will need to socialize some of the risks. “In the end, I think it is likely that political and regulatory decisions will determine how fast the energy transition can go, more so than technology or costs.”

What is striking about the ETO is that it is more optimistic about the speed of the energy transition than most other outlooks. Even so, notes Alvik, the pace of the transition will not be fast enough if no extra measures are taken. “In this sense our results are in-between the reference scenarios and the 2-degree scenarios of most other outlooks. So we are more positive about the changes we will see, but they nevertheless indicate a 2.6 degree Celsius temperature rise.”

More “policy support” is needed for the world to meet the goals of the Paris Agreement, says Alvik. What technologies should policymakers support? In this year’s report, the DNV GL researchers take a closer look at the potential of hydrogen. They conclude that based on current knowledge, hydrogen will not constitute more than 0.5% of energy supply in 2050, although in some regions and some segments (for example, where there is a lot of gas infrastructure) the percentage will be much higher.

“That is not a lot”, Alvik admits. “But we expected that. What we wanted to know is what it would take for hydrogen to play a bigger role.” The answer, he adds, is: “large-scale policy support on a global scale. Right now some countries like Japan and the UK give support to hydrogen, but that’s not enough. You need the type of policy support that renewables and electric vehicles are getting to bring costs down. Only if that happens are we likely to see a broad take-off.”

It is the same as for carbon capture and storage (CCS), says Alvik. “That too needs much broader and stronger policy support to make it scale.”

Should policymakers give this kind of support? Alvik: “For CCS, yes, definitely. We need CCS to get to zero emissions, just as we need more energy efficiency and renewables. For hydrogen, it’s a choice. There are different options available. I believe the same goes for nuclear power. It’s an option, it can work, but it is expensive. Still not all decisions are driven by cost considerations. Our model does not say, ‘build Hinkley Point C’ [the nuclear power plant in the UK], but politicians took that decision.”