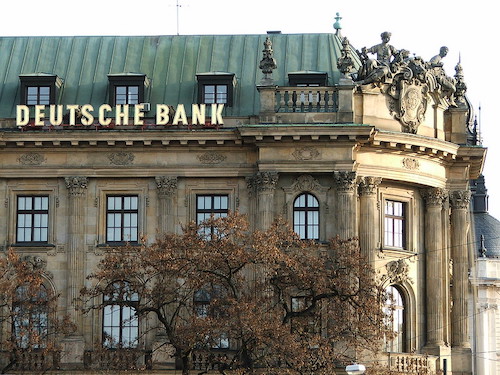 Frankfurt-based banking giant Deutsche Bank is immediately cutting off financing for new tar sands/oil sands and Arctic oil and gas projects and will end its involvement with coal mining by 2025, in a move that at least one Canadian climate analyst praised but a European campaign organization cast as just a first step in a longer transformation.

“The German bank says its new fossil fuels policy will also prohibit investing in projects that use hydraulic fracturing or fracking in countries with scarce water supplies,” The Canadian Press reports. “It says its ban on oilsands financing, effective immediately, will include exploration, production, transport, or processing, seemingly including oilsands pipelines and upgraders or refineries.”

The bank will also reduce its support for coal-fired power plants by 20%. “Deutsche Bank says the moves are part of a commitment to align its credit portfolios with the greenhouse gas reduction goals of the Paris Agreement,” CP writes.

The new policy “sets us ambitious targets and enables us to help our long-standing clients with their own transformation,” said CEO Christian Sewing.

Greenpeace Canada senior energy strategist Keith Stewart said the announcement puts other decision-makers on notice. “Deutsche Bank’s updated fossil fuel policy is the latest warning shot telling us that doubling down on coal, oil, and gas will sink our economy while destabilizing the climate,” he told CP. “We still have time to protect the workers, communities, and regions currently dependent on oil as we navigate this shift and ensure that all Canadians prosper in the new low-carbon economy.”

But German anti-coal campaigners at the non-profit Urgewald said the “much-needed movement” reflected in Deutsche Bank’s announcement still left the institution a long way from complying with the carbon reduction targets in the 2015 Paris accord.

“The bank intends to drop clients with either a coal share of revenue or a coal share of reserves of more than 50% by 2025,” Urgewald writes in a release. But “big, diversified coal producers such as BHP Billiton, Anglo American, and Glencore will not be affected by the policy, according to Urgewald research. The Norwegian Government Pension Fund recently excluded these companies from its portfolio for their especially climate-damaging practices.”

As for coal-fired power plants, “the bank has not specified any concrete exclusion plans yet,” Urgewald continues. “Instead, the bank announced it would assess coal power companies’ transition plans by the end of this year.”

But the policy only applies to utilities that produce more than half of the power from coal, meaning that some major offenders are excluded. It also gives companies like Europe’s biggest CO2 emitter, RWE, and Poland’s biggest coal company, PGE, “a chance to convince Deutsche Bank that their transition plans are sufficient to remain in the bank’s portfolio. Although both companies are leading lignite miners, they are regarded as utilities and rarely generate any revenue from selling coal.”

All in all, “Deutsche Bank seeking to limit its fossil businesses is a much-welcomed step forward,” said Urgewald coal campaigner Regina Richter. “From a climate perspective, however, this is still too little, too late. We would have needed significantly more ambition in the year 2020.”