Energy is the capacity for doing work and providing the attendant jobs and social benefits those jobs provide. It is the solution to mankind’s next greatest nine problems. For over two centuries about 80 percent of global energy has been provided by fossil fuels the cost of which have doubled in the past year and for natural gas has tripled because of the strife in the Ukraine. Which is far in excess of the global inflation rate of 2021, which was 4.35% which in turn was 12% higher than the inflation rate of the previous 5 years and is about 32% higher than the projected inflation rate of the next 5 years.

This covid induced recession will recede but energy inflation will accelerate due to carbon pricing which economists claim will reduce greenhouse emissions and drive innovation but virtually every carbon capture initiative createss more emission than it sequesters and consumes rather than produces energy.

For example, Recharge News reports that in 2020, the world used 462 exajoules (EJ) of energy from fossil fuels, which resulted in 32 billion tonnes of CO2 emissions and the Australian math-as-a-service company Keynumbers calculated that direct air capture (DAC) of this greenhouse gas from the atmosphere would require 448EJ not including the energy needed to transport and store the captured CO2.

Climeworks “Orca” plant in Iceland, at a cost of between $10 – 15miillion, is the largest and the most economical of the DAC enterprises because it takes advantage of the geothermal energy  released from the rift formed in the Mid-Atlantic Ridge as it emerges at the surface and bisects Iceland and the high porosity of the fresh basalt produced by the rift that will react with and mineralize the CO2 and H2S that will be pumped into the storage site at Nesjavellir.

It is estimated that the Orca plant can sequester about 4,000 tonnes of CO2 a year, so it would take of 8,000,000 of these to sequester 32 billion tonnes, at a total cost of about $38.4 trillion which is about 45% of the current global GDP and about 6 times annual global energy consumption.

It is little wonder then fossil fuel produces think carbon capture and reuse (CCUS) is a great idea?

For example, Exxon has floated the trial balloon of a $100 billion carbon storage project for the US Gulf Coast largely funded by a carbon tax paid by taxpayers. And Canada’s oilsands’ industry is seeking $75 billion to reduce 70 million metric tons per year of their emissions, which are  about 10% of Canada's total emissions.

And over and above crushing energy costs and mounting carbon levies are interest rates the rising of which will dampen the Covid Recovery leading to lower purchasing power and therefore demand in a classic demand-pull cycle of inflation where too much money is chasing too few goods.

Work and jobs are synonymous, but the architects of the American shale revolution have pledged to put investor returns above all else. And as the following graphic by BNN Bloomberg shows, in Canada, oil prices haven’t led to greater investments in the sector for the past decade which has shown a steady loss of jobs 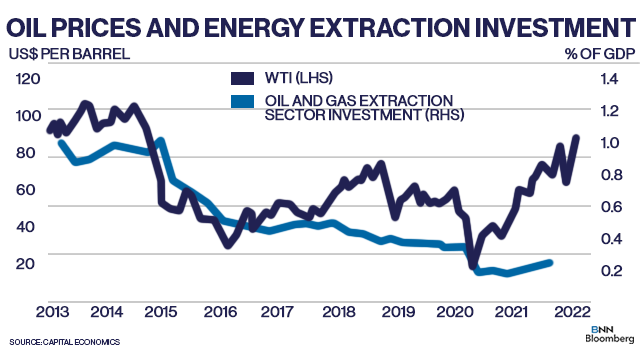 All of which feeds into a rise in populism where “the elite” as represented by fossil fuel investors, bankers and the policy makers are insulated by rising energy costs while "the people" suffer the consequences of rising costs and authoritarian policies that make their plight worse.

As carbon pricing was intended, the solution is energy innovation that is virtually nonexistent but for CCUS.

The province of British Columbia has been internationally celebrated for its equitable application of carbon pricing, but it still derives at least 70% of its energy from fossil fuels. And although it advertises itself as a leader in emissions-free hydroelectric power generation, it derives only 18% of its energy from that source. And BC Hydro, the Crown corporation whose job it is to provide the citizens of the province with reliable, affordable and clean electricity, squashes every attempt by the renewable energy sector to gain a foothold. As does virtually every other public and private utility that has massive sunk costs and proprietary local knowledge.

Innovation only flourishes when there is unfettered competition but the Canadian Competition Bureau, whose job it is to ensure that Canadian businesses and consumers prosper in a competitive and innovative marketplace, instead enforces competition law against firms that could otherwise be contributing to the country’s economic growth by facilitating  things like pricey cell phone bills, excessive banking fees, growing grocery bills,  the rising cost of buying homes and of energy. And Canada is far from unique in this regard.

It is long past time for the public’s need for affordability to trump industry’s desire for profit!

Global warming is the incapacity to do work with the energy we have been afforded and to provide the concomitant jobs and social benefits that work can provide.

As fossil fuels become more and more expensive, the cost of renewables decreases and in the case in of Thermodynamic Geoengineering that decline is 22% with every doubling of the capacity of the infrastructure.

Per the following graphic from the study led by Wei and Qiao of China’s First Institute of Oceanography, Climate Models Can’t Reproduce the Early-2000s Global Warming Slowdown. 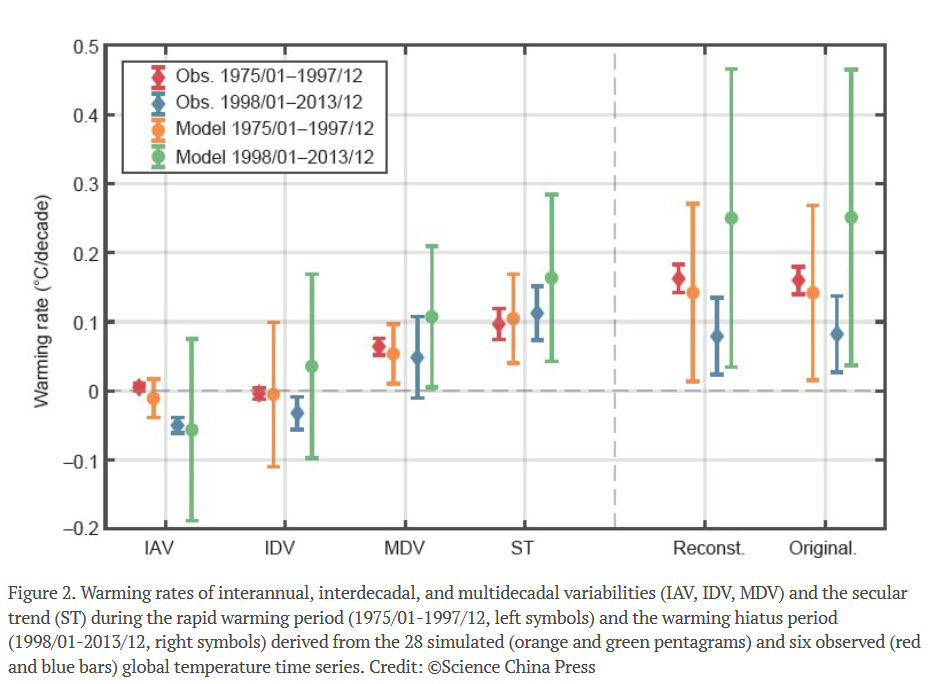 During the warming hiatus between 1998 and 2013. surface temperatures declined below the previous 22 year average and considerably below that a suite of climate models predicted.

The reason was increased heat uptake across the Atlantic, Southern, and Equatorial Pacific oceans.

These conditions can be capitalized on with concomitant climate mitigation with basic heat engines that accord with the laws of thermodynamics per the following graphic. 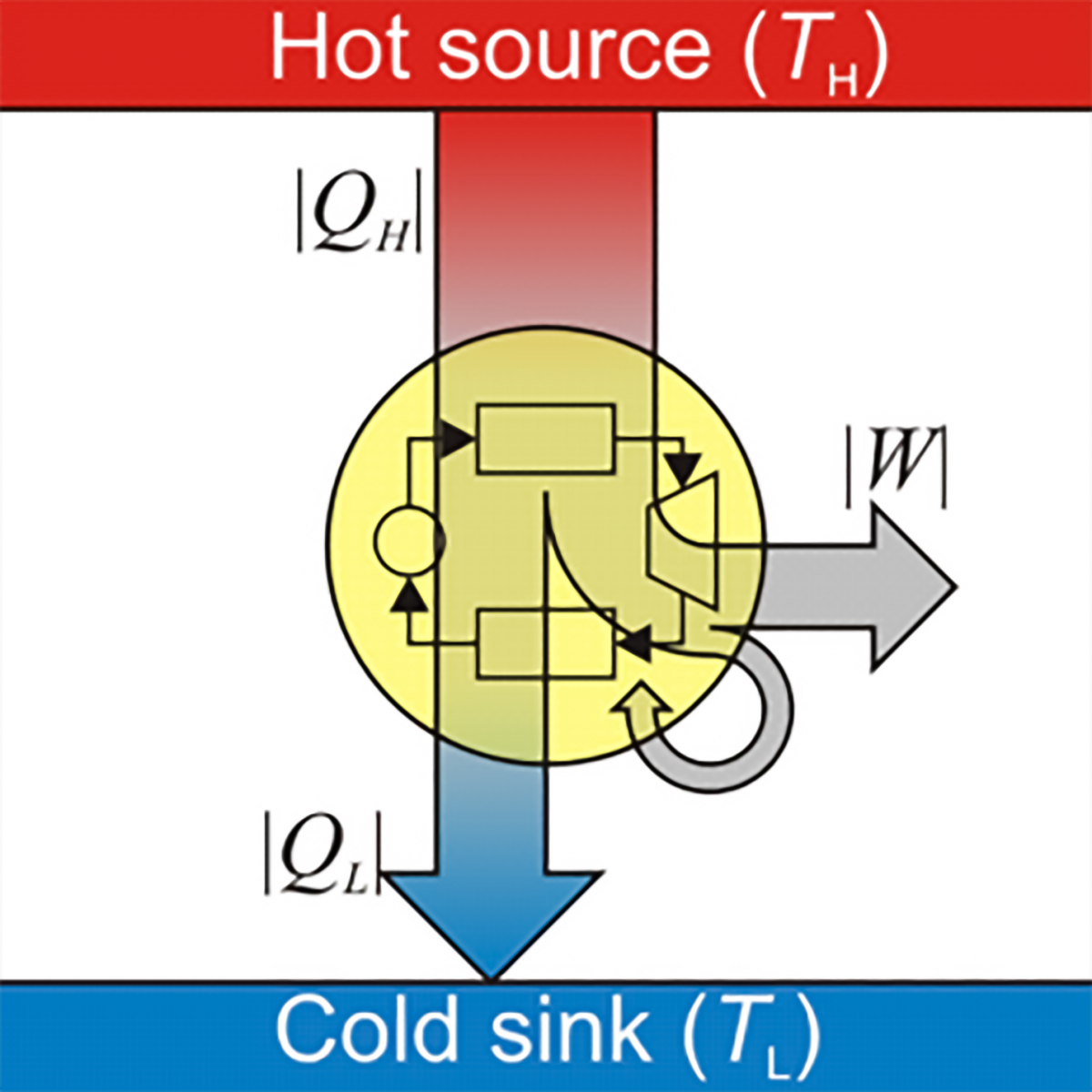 Whereas Russia and the other petrostates try to dominate the energy markets, the oceans are a resource we have in common that can be utilized to bring about the international accord and prosperity that is currently in short supply.

Instead of too much money chasing too few goods, we have too much energy in the oceans that is simply going to waste.

Jim, I like it when we have high prices. The only time I see everyone wanting to own and drive a super efficient Electric Vehicle is when gas prices are over $4 a gallon. Yet if the USA would stop subsidies gas would be $8-12 a gallon like it is in Canada and Europe.

When Electric prices rise then many people start checking into Solar and ways to make their homes more efficient. So only high prices seem to make people look for better choices. They don't seem to worry about record CO2 or other air and water pollution. Only prices seems to move people.

Jim I agree "Only prices seems to move people." I don't see that making energy prices higher is a good thing as you seem to suggest so that we buy electric vehicles? The subsidies cost us one way or the other even if it is only in the form higher deficits that are kids will have to pay for or pass on further to their kids.

The oceans can provide us with twice as much energy for zero subsidies, yet no one still seems to be moved.