DERs as a new dimension to “Affordable” Housing Ankur joined the Buildings Research Group at NREL in 2019 with a focus on buildings advanced manufacturing and integration science. His work includes facilitating integration of a wide range of...

According to the National Low-Income Housing Coalition, the United States needs a minimum of 7.2 million more affordable housing units (and potentially as many as 12 million units). The Terner Center’s report Building Affordability by Building Affordably recognizes that off-site modular construction facilitates rapid production of an affordably built supply of housing, through faster construction timelines, improved workforce productivity, and cost savings. As the building industry rises up to meet this capacity goal leveraging the benefits from off-site modular construction, there is a need to address “long-term affordability” by including another key determinant i.e. household energy costs. These costs continue to place a major energy burden on tenants or homeowners. Compared to middle- and upper-income households that spend 5% or less of their total household income on energy purchases, low-income householders spend 10% or more of their income on energy expenses. “Low-income individuals typically are less likely to participate in clean distributed energy resources (DERs) due to critical barriers such as lack of access to capital, lower credit scores and lower rates of homeownership. Unless these gaps are addressed, the transition to clean energy resources could widen the energy burden gap between high- and low-income households…” as noted in the report Encouraging the Development of Distributed Energy Resources in Texas.

DERs such as solar, storage, energy efficiency, and demand management are key ingredients to ensure long-term affordability and must be integrated creatively during new construction of affordable housing units. This is especially possible by leveraging benefits from off-site modular construction. According to a recent report by McKinsey & Company, prefabricated assembly of modular buildings has demonstrated up to 50% construction time savings and is being looked to as a proven ‘affordability through innovation’ method to increase productivity and significantly reduce construction costs. Similarly, DERs soft costs associated with procurement, installation, and O&M could be significantly lowered in order to increase adoption rate and reduce decision-making times. For example, the upfront costs of a rooftop solar installation can be reduced by integrating panels and racking system during the off-site modular construction (vs on-site retrofitting after the off-site construction and on-site assembly is completed). This could very well be the future as new codes come into play, such as in the state of California where high-performing industry entities such as Sunrun are exploring innovative installation systems for new construction. Another driving force is the rise of home battery system providers such as sonnen who augment possibilities in large projects by integrating each home or apartment unit with residential energy storage. As demand response and smart meters continue to allow users to reduce consumption during peak periods, collaboration of affordable housing builders with smart apartment integrators such as STRATIS IoT during new construction becomes essential to ensure tenants and homeowners can directly benefit from such DER innovation right from day one. DERs for affordable housing can also take the form of rooftop and vertical Building Integrated Photovoltaic (BIPV) solutions that attempt to replace traditional roof shingles and rainscreen or façade of affordable housing units to further drive down installation costs of solar PV. For rooftop BIPV, the cost compression opportunity has been well documented in the 2011 report by National Renewable Energy Laboratory (NREL) titled “Building-Integrated Photovoltaics (BIPV) in the Residential Sector: An Analysis of Installed Rooftop System Prices”.

Today, an increasing number of Zero-Energy Modular (ZEM) homes in the United States created by permanent modular builders such as Gaia Homes, S2A Modular, and Solar Home Factory promise to be all-electric, highly efficient and are often outfitted with rooftop solar arrays and use about as much energy as they produce each year. However, affordable ZEM buildings are not being designed, constructed, and delivered across the United States at the rate one would expect, as highlighted by Vermont Energy Investment Corporation’s market analyses reports. Clearly, there has been minimal work to creatively combine both the intrinsic benefits of design for manufacturing and assembly (DfMA) and off-site modular construction with the installation of advanced controls, DERs, and Grid-Efficient Building (GEB) design strategies. There is a need to prove that off-site modular construction can address housing affordability challenges by lowering both the cost of construction and the energy burden. Can we design a kit of DERs through DfMA framework to be integrated during off-site modular construction of new and upcoming affordable housing projects in order to ensure both lower rents and lower energy bills? 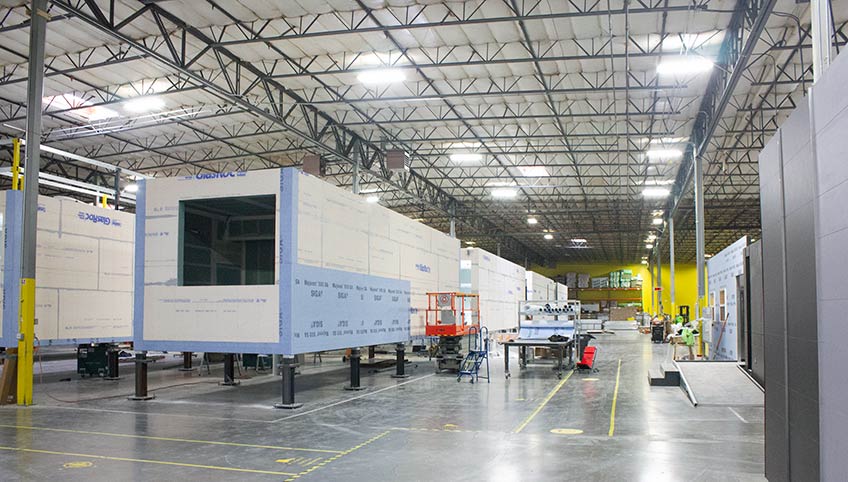 Supported by US Department of Energy (DOE) Advanced Building Construction Initiative, NREL has developed an ambitious plan to accelerate the integration of DERs during off-site modular construction of affordable housing. The goal of this research is to achieve optimal integration of DERs and control systems through DfMA with little or no additional cost. To create a novel 'DfMA of DERs' framework and a national-scale shared development platform, NREL is engaging with building design professionals, building component manufacturers and suppliers, developers, and off-site modular construction factories to overcome barriers of cost, construction speed, and limited labor expertise, as presented in this 2020 ACEEE Summer Study paper.

The affordable housing stock should absolutely be a top priority for these new tools we have. That low-income households pay a higher portion of their income towards energy is just another on the pile of equitability challenges in the sector, and it can't be overlooked. Obviously the high capital costs are a deterrent, so government programs are essential-- what have you seen to be some of the bigger hurdles in getting those government programs supported and off the ground?