Debunking the Myths About Long-Term Fixed Pricing of Power

Mr. Jack Doueck has been in the financial services industry since 1992, and has founded and run several investment funds and companies. In 1997 Mr. Doueck co-founded an investment advisory firm...

Over the last few years in de-regulated states, there has a been a widespread notion that long-term fixed pricing is the best path to the lowest cost for electricity. This is especially true among large commercial customers and real estate owners across the country.

Commercial landlords are accepting the argument that long-term fixed pricing is the best way to achieve the lowest cost possible. Energy brokers will sometimes call landlords while their contracts still have a year or more left, and ‘blend and extend’ them so that they go out even longer.

A slew of recent studies, however, has shown that over the past six years, fixed pricing was more expensive than index (variable) pricing in virtually every market.  Let me say that again: Whenever you fixed the rate since 2014, (any day or month you chose to do this), for 12 months or more, you paid more for power over the next twelve months than had you simply rode the index for real time energy. This analysis includes some of the most volatile power markets in recent memory – and, still, floating was cheaper than fixing for 12 months or more.

The chart below compares the forward 12-month fixed block price for energy in New York City for a given month versus the average index real time energy cost for the same period. Overall, long-term fixed pricing has been on average, 33% more expensive than index. 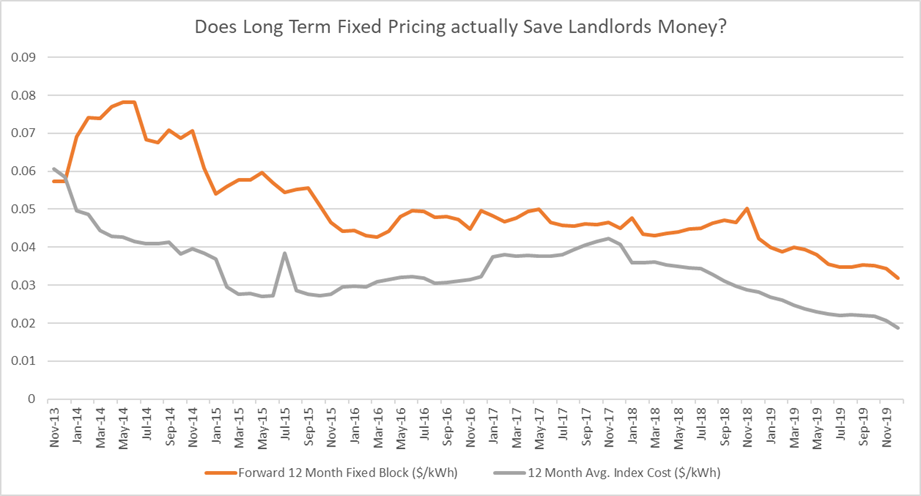 Recently one of the largest energy suppliers in the country (with more than six million customers) ran a webinar that showed similar results. They took their own 12-month fixed pricing that they offered their large C&I customers since January 2015 and compared it to the index and with only one exception, every single fixed price in every month for the past six years was more expensive than the index.  The average forward price was $5.22/mWh higher than the index price.  In other words, they admit that index pricing was less expensive that their best 12-month fixed pricing at any time in the last six years.

On January 8, 2014, John F. Kennedy International Airport had canceled about 1,100 flights, Newark Liberty International Airport had about 600 canceled flights and LaGuardia Airport had about 750–850 flights canceled.  In New York City temperatures fell to a record low of 4 °F (−16 °C) on January 7, which broke a 116-year record. … with a wind chill of -33 °F.  Electricity rates rose - temporarily and energy brokers seized the opportunity to sell fixed pricing to their customers. They locked in rates at about $0.16/kWh (double the previous month’s average rate).  That year the average index rate was less than $0.06.  Did those 12-month fixed rates save customers money?

The absolute optimal time to buy a 12-month fixed price block was December 2013, just before the January 2014 polar vortex.  However, even with that superb hindsight vision and perfect timing, the savings for that period over the index was only 2%.

The reality is that electricity rates have been on the decline since about 2008 in virtually all markets.  And the trend is continuing. In the PSEG territory, the average first quarter 2021 rate is lower than any rate since 2015.  It is the same in New York.

If one tracks this trend over the last few years, he will notice that there has seemingly never been a ‘bad time’ to lock in rates!  When rates increase, customers are told that rates are rising and will continue to rise, so they should “lock in now before it gets worse!” When rates decline, customers are advised to “lock in now at historic lows.” “This may be the bottom”, they say, “so lock in now” before rates start to rise!” Despite the reality of prices, the obvious conflict of interest from energy brokers pitching long-term fixed pricing suggests why customers have been so hard pressed to adopt it.

Let’s unpack this quest by customers.

The reality is that long-term fixed rates for electricity supply does not actually provide the coveted ‘budget certainty’.

First, approximately half the electricity cost is made up of “T&D” (Transmission and Distribution) charges that are billed by the local utility for the delivery of the electricity. These charges are always variable and cannot be fixed or hedged.  Second, as we have seen the hard way in 2020, the actual usage or load varies based on occupancy. So, two out of three variables are never fixed. We have shown clients why even if you have a fixed rate for supply, when the T&D charges go up or down (as they have done drastically in 2020), and when the actual usage drops (or increases), the budget is anything but ‘certain’. 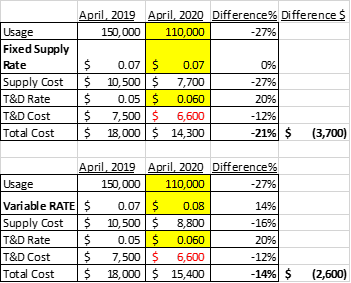 The two examples above from 2019 and 2020 demonstrate why long-term fixed supply pricing can result in more of a difference to the budget than variable.  We have dozens more examples that show similar (varied) results – where energy usage increases or decreases and where the T&D rates go up and down.

To be sure, all other variables being stagnant, having a fixed supply rate can help in the budgeting process. However, a good energy consultant can assist with budgeting and forecasting (using forward curves and historical usage) even if the rate for supply is variable. We have done monthly budgets for clients who use Block and Index procurement strategy as well as for clients with long-term fixed pricing, and the budget differentials are about the same. To be sure, long-term fixed supply rates do not provide ‘budget certainty’.

What we believe customers really want (and what they can get) is protection from rate spikes.  Perhaps that is what they really mean when they say they want ‘budget certainty’.  So, is long-term fixed pricing the only way to ensure that they won’t be hit by price spikes? The answer to this question is a resounding ‘no’.

With an intelligent “Block and Index” procurement strategy, the commercial customer buys short-term fixed priced blocks of power specifically and only for the months with historical price risk thereby protecting from spikes ONLY for those specific months in which the building has price-spike risk. This is usually the peak of summer and winter.  The rest of the year the building obtains the true lowest cost by buying in the day-ahead wholesale market – in other words, variable index pricing. With Block and Index strategy, customers can obtain the true lowest cost, because the procurement strategy itself, while more work for the energy provider, is smarter.  This is the ideal strategy for a customer who is sensitive to consistently obtaining the lowest price and avoiding price spikes in the riskiest periods.  Put differently, the customer is, in effect, buying energy with scalpel instead of a sledgehammer – a much more effective pricing strategy is the result.

We have numerous case studies of large C&I assets that used the Block and Index procurement strategy over the last few years.  It accomplishes everything that customers want: It protects against rate increases; it buys power at the cheapest price during the shoulder months, and it is just as easy to budget for.

Essential to every customer’s long-term fixed price evaluation is the creation of a ‘beauty contest’ (a reverse auction) so that an ‘apples-to-apples’ comparison between vendors can be made to find the lowest cost. Customers are presented with this comparison and assured that this is the only way to obtain the lowest cost.

However, is that true?

No. The ‘beauty contest’ approach followed by long-term fixed pricing does not generate the guaranteed lowest cost.

Unfortunately, long-term fixed pricing always benefits energy companies without benefitting customers. When ICAP tags go down, no supplier that we know of has ever given a customer a credit. But if the ICAP tag goes up, the supplier will pass the charge through to them and force them to take the risk. The electricity contracts for long-term fixed pricing allude to this in the fine print and multiple lawsuits have arisen fighting it – all to no avail.  Commercial customers are right to wonder: what is the benefit of a long-term fixed price contract during which prices that I pay go up but cannot go down?  Answer: none.

So, is there an energy procurement strategy that avoids the pitfalls of today’s common practices? Happily, there is.  Customers should have suppliers submit bids for a Block and Index strategy and ask them to bid transparently on the gross margin, or the ‘adder’. Then, to see if they really saved money, customers should retroactively compare the actual cost incurred to what the local utility would have charged.  That is the only true apples-to-apples comparison, and the only way to evaluate if buying from an energy supplier has actually saved them any money.

For long-term fixed pricing, touted as the ideal way to reduce cost, the disadvantages to this outdated strategy outweigh any seeming benefit. Long-term fixed pricing does not produce the lowest cost.   It does not provide customers with ‘budget certainty’. The ‘apples-to-apples’ comparison is prejudiced and fraught with risks. Thankfully, many if not most large commercial landlords are realizing the fallacies of the methodology and moving to a more intelligent process. With a Block and Index strategy and full wholesale cost transparency, customers are finally able to achieve their goals for reduced cost, protection from price spikes and onerous ETFs.

Jack Doueck is a Founder and Principal of Advanced Energy Capital, LLC.  He can be reached at JD@AdvancedEnergyCap.com.

How are the smaller businesses handling these same questions, if they don't have the same facilities managers who are experts in these types of deals?

Matt - Thanks for your question. Companies don't need to have facilities managers with this kind of energy expertise. All they need is an honest energy broker/consultant who can make sure they get a block and index strategy.  Any size company or real estate asset can benefit from Block and Index. The suppiers can be transparent about their margin, buy power for them on the index all year, and twice a year buy blocks for them so that they are protected from spikes.  It is fairly easy to do.