Debatable: The case for going nuclear (or not) This recent (August 27, 2021) New York Times column attempts to give a somewhat balanced view of the prospects for nuclear energy and its place as a provider of energy in the US in the future.

The crux of the situation may be found here:

This is a little less obvious:

“Nuclear power may be safer than the public believes, but the public’s beliefs matter a great deal in a democracy. Solar and wind power are extremely popular with Americans, but nuclear power is viewed unfavorably, with more people opposing its expansion than supporting it.»

The following are some other excerpts from the column. However, I suspect that the sources of the ideas in the article are subject to appraisal by Energy Central readers. For example, for comparisons of price for different sources of electricity, the Times refers to this article.

Do the data support the conclusion in the title?: “Wind and solar kill coal and nuclear on costs, says latest Lazard report»

I´m not so sure, and the data seem to be less clear than the title suggests.

Two things are, however, clear: 1) The issue is increasingly crucial with respect to the outlook for climate change. 2) Technology is progressing in unpredictable ways that make it only more difficult to find the best way forward

Is France an exception here?

«Perhaps most important, nuclear power plants take much longer to build than renewable energy projects. Since the Three Mile Island accident in 1979, the construction time for most reactors in the United States has exceeded 10 years...”

Nevertheless, there is a case for keeping our options open

All of the statements above are, without doubt, debatable, especially those concerning future developments.  I would only add that if the US and Europe take the nuclear route to decarbonization, it would set an impossible example for the developing world to follow.  And without decarbonization by the developing world, getting global ghg emissions under control seems hopeless.

At the same time, seeking out a one-size-fits-all solution isn't what we should be pursuing. What works in one country with its geography/resources/politics/economy will not necessarily be the best suited for a separate country with its own unique profile.

Good point Matt. No country will fit into a narrow profile for decarbonization.  There needs to be a practical way to mix approaches from  one place to the next.

No one should care what an investment bank's "report" says when that bank has $billions invested in the products on which it's reporting. The inherent conflict-of-interest should be obvious.

Nuclear is, by far, the cheapest source of energy - when evaluated over a plant's potential lifetime of 80-100 years. If you want to make a quick buck, however, over and over again, keep investing in solar farms. They will never end reliance on fossil fuels, but they will impress your friends!

"Since the Three Mile Island accident in 1979, the construction time for most reactors in the United States has exceeded 10 years...”

More evidence that public perception, not safety, is the reason why nuclear plant construction has stalled in the U.S.

The 1979 accident at Three Mile Island was a Loss-Of-Coolant Accident (LOCA) nearly identical to what occurred at three different reactors at Fukushima-Daiichi in 2011. Yet radioactive material wasn't spread over Philadelphia in 1979 because a vigilant and competent U.S. Atomic Energy Commission had required containment - a four-foot-thick shell of reinforced concrete around the reactors at TMI,  specifically designed to withstand the hydrogen explosions that blew reactor buildings wide open at Fukushima.

We do nuclear right - and TMI is the perfect example. It's one not of failure, but of triumph.

"The world should build whatever carbon-free options are fastest and (with all costs considered) cheapest."

Then the world should build pedal-powered generators. We could quickly build 7 billion of them, one for every adult in the world, for less expense than any other source. They work at night and in any kind of weather, and are 100% safe and carbon-free!

The idiocy of this rationale should be obvious, too.

Nuclear is, by far, the cheapest source of energy - when evaluated over a plant's potential lifetime of 80-100 years.

In the real world, we are nearing 200 reactors that have permanently shutdown and none of them has made it close to 60. 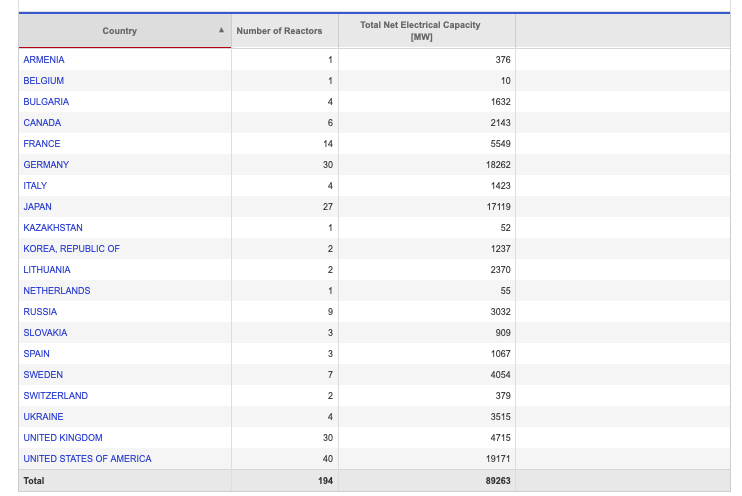 Thirteen reactors were permanently shutdown in 2019, six reactors in 2020 and two more so far in 2021.   Do you see any pattern in how old they were when retired?

Exactly, Joe. Most have been shut down prematurely, because rabid anti-nuclear activists have let their irrational fear obscure common sense. Environmentalists and energy professionals aren't putting up with it anymore. Get used to it - nuclear energy is the future.

Worldwide there are now 238 reactors 35+ years of age.

Let's assume the world can keep nuclear reactor retirement down to a modest 4 per year over the next decade.  That will mean that we will still have about 200 reactors which will then be 45+ years of age.

As you can see from my list - in the prime retirement zone.

Maybe the new 3D printers can create replacements for all the obsolete parts that will be breaking down by then.

The life of the older plants has been extended to 60 years, and potentially longer. Technically, not all that difficult.

The problem lies with the ability to make a profit with the assets. Technology innovations, particularly with gas turbines, create much lower cost energy. Renewable energy can, in proper locations, be cost competitive. Private companies are not going to generate power if they cannot earn a profit.

"I would only add that if the US and Europe take the nuclear route to decarbonization, it would set an impossible example for the developing world to follow. "

Please be sure to let members of the West Africa Power Pool know that nuclear energy is only for white, upscale countries, Mark. Seems they have other ideas:

"Africa is hungry for energy, and nuclear power could be part of the answer for an increasing number of countries,” says Mikhail Chudakov, deputy director general and head of the Department of Nuclear Energy at the International Atomic Energy Agency (IAEA), an international organisation that promotes the peaceful use of nuclear technology.

"A third of the almost 30 countries currently considering nuclear power are in Africa. Egypt, Ghana, Kenya, Morocco, Niger, Nigeria and Sudan have already engaged with the IAEA to assess their readiness to embark on a nuclear programme. Algeria, Tunisia, Uganda and Zambia are also mulling the possibility of nuclear power.

'Energy is the backbone of any strong development,' says Nii Allotey, director of the Nuclear Power Institute at the Ghana Atomic Energy Commission. 'And where do we get energy from? We have hydro, thermal, fossil fuels, and we have local gas—but these are dwindling. They are limited; fossil fuels could run out by 2030. And, the prices are volatile.'

For Ghana, cost-effective, reliable electricity is the entry point to higher-value-added manufacturing and export-led growth. For example, the country’s reserves of bauxite—the ore used to produce aluminium—are an important source of income, but for now it is exported raw."

As usual I guess I disagree with many about finite Nuclear uranium. There is no way we would have enough to keep all the 103 Nuclear plants going. They ran out of space for the waste so they allowed more to each site . The cost of a Nuclear plant is so high they have never built even one without huge subsidies. Whike Solar PV is so low in cost everyone can put some right on their home. I own 2 large system and am working on 2 more. Wind and Geo Thermal are also low cost. Hydro is also a great renewable but cost more to build up front.

Jim, you have no basis for any of this propaganda extracted from the 1970s-era anti-nuclear playbook, and recycled ad infinitum. No links, no nothing.

I will refute one of your talking points, but I must apologize: I have a Zoom meeting soon with a California senator to refute pro-renewables talking points in a letter from the California Public Utilities Commission, so you'll have to learn the truth about your other allegations yourself. If you still insist on disagreeing with the truth, as always, that's your option.

Too much anti-nuclear propaganda, not enough time!

"According to the NEA, identified uranium resources total 5.5 million metric tons, and an additional 10.5 million metric tons remain undiscovered—a roughly 230-year supply at today's consumption rate in total. Further exploration and improvements in extraction technology are likely to at least double this estimate over time."

Jim, you do realize that green energy is subsidized by billions-and-billions of dollars? Those subsidies were only suppose to be temporary.

There are ways to substantially reduce uranium usage - basically lies with much more efficient reactors; need designs that operate at much higher temperatures. That being said, I believe nuclear energy will continue on a steady decline in the US. Basically, it is too financially risky to build new units, with massive overregulation by the US Nuclear Regulatory Commission creating vast and unnecessary costs.

Also, lot easier to build large natural gas plant; takes around 23 months and a little less that a billion dollars. Nuclear +10 years to build, cost well over 10 billion dollars, and unlikely to ever be profitable. Pretty easy decision on which to build.