Climate Policy in the Biden Era: It’s Morning in America

A cry for survival comes from the planet itself.

Following the election of Donald Trump, I wrote it was mourning in America. I knew with near certainty that climate policy in the Trump era would be nothing less than catastrophic. He did not disappoint.

Following Joe Biden’s inauguration, it is also morning in America. I know with near certainty that climate policy in the Biden era will be nothing less than spectacular when compared not only to Trump but to President Obama and others who’ve held the position in the modern era.

Trump’s climate legacy is written in the rollback or substantial weakening of 200 or more environmental protections. Everything climate-related felt Trump’s blade from auto and truck fuel efficiencies and emissions to whether there’s any possible benefit—social or economic—attributable to slowing the rate of Earth’s warming or protecting the nation’s streams and rivers from chemical discharges.

Trump’s administration opened national lands to the exploration and extraction of fossil fuels. It dismissed public input required by law even before it was given. According to the Center for American Progress, President Trump eliminated protections on 16 times more land than President Teddy Roosevelt protected as national parks and monuments. The totality of it all makes Trump the worst environmental president in history.

In his inaugural address, President Biden spoke of the nation’s four ailments—contagion, recession, racism, and climate change in his inaugural address. He spoke too of what would heal the country—unity—if not in thought, in a shared willingness to discuss solutions in a manner that ends this civil war that pits red against blue, rural versus urban, conservative versus liberal. Voters  approved, but for how long? (Figure 1)

The President followed up his words with actions. Before his inauguration day was over, Biden:

Inaugural week also saw events that bode well for the environment. Ahead of the inauguration Janet Yellen, Biden’s choice for Secretary of the Treasury, pledged during her confirmation hearing to establish a hub at the Department that would examine financial risks of climate change and related tax policies. She also indicated her intention to appoint a very senior official to lead climate efforts within the Department. 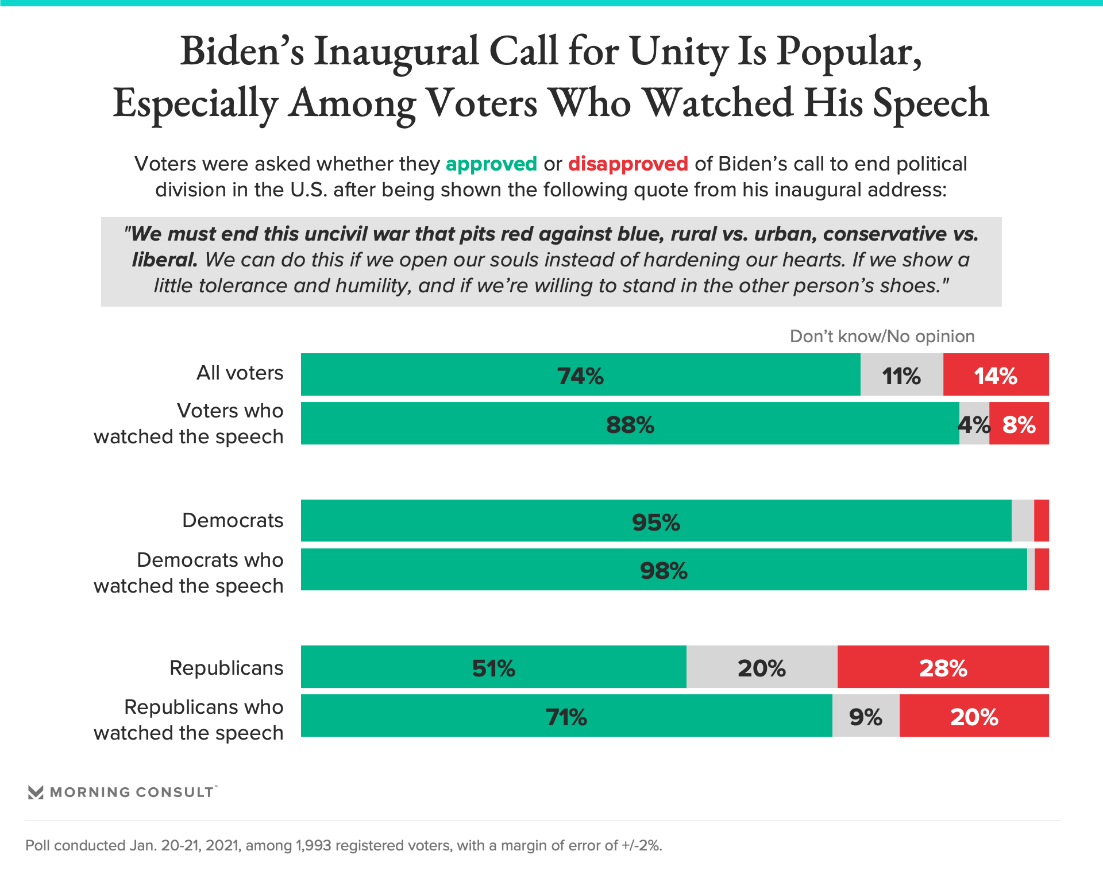 The President’s nominee for Secretary of Transportation Pete Buttigieg appeared before the Senate Committee on Commerce, Science, and Transportation. Transportation is the largest contributor of carbon dioxide to the atmosphere. Despite the Trump administration’s best efforts to freeze federal targets for average fuel efficiencies at the current levels, rather than those the industry agreed to with the Obama administration as part of their 2009 bailout, electric vehicles are the future. The difference between the Trump and Obama targets is over 15 miles per gallon.

The Trump administration pulled California’s long-standing right to set a more stringent standard than that established by the federal government. It was only the second time the waiver was suspended. It was previously revoked in the closing days of the George W. Bush administration. The Obama administration re-issued the waiver as one of its first acts.

Auto fuel efficiency standards and the electrification of autos and light trucks offer the Biden administration a chance to prove its commitment to bipartisan governance and willingness to work in partnership with industry. Building out the infrastructure for electric and alternative-fueled, e.g., hydrogen, vehicles will be a significant part of any infrastructure legislation.

In addition to Buttigieg, Biden nominated former Governor Jennifer Granholm as Secretary of Energy and the current governor of Rhode Island, Gina Raimondo, as Secretary of Commerce. Both have strong environmental records. Granholm worked closely with Biden in 2008 to craft and implement the auto bailout.

The day before Biden was sworn into office, the US Court of Appeals for the District of Columbia blocked the Trump administration’s replacement of Obama’s Clean Power Plan with the Affordable Clean Energy rule. The three-judge panel accused the Trump administration of a “fundamental misconstruction” of the country’s environmental laws and effectively sidelining the Environmental Protection Agency’s (EPA) efforts to weaken climate change policies.

The appeals court did not reinstate the Obama era rule. It did, however, remand it to the Environmental Protection Agency for further action. A lot has changed since the Clean Power Plan (CPP) was issued. Although there is a hole where a regulatory regime once stood, the appellate court action has saved a step in what will be the years-long process of issuing a new regulatory scheme.

Much has changed since the days of the CPP. To meet Biden’s goals of a carbon-neutral power sector by 2035 and a net-zero nation by 2050, a significantly stronger plan will need to be put in place. Under the best circumstances, drafting, issuing, and finalizing a new rule could easily take four or more years.

The Administrative Procedures Act (APA) governs the issuance of any new rule. Among other of its provisions, the Act requires an agency to solicit public input. EPA received 4.3 million comments on the draft CPP and conducted hundreds of stakeholder meetings.

Complicating the issuance of a CPP 2.0 will be the legal challenges coming from red states and the fossil fuel industry. Arguments questioning EPA’s authority to issue the rule and its interpretation of the Clean Air Act will again be made.

Given the conservative textualist bent of the current Supreme Court, these arguments may prove convincing. The foundational case for EPA regulation of carbon dioxide, Massachusetts v EPA, was a 5 to 4 decision. The dissenting opinion was written by Justice Antonin Scalia, a conservative jurist in whose footsteps the three Trump nominees appear to walk.

President Biden has staked out his intentions to be the best environmental president in history. In an era when personnel are policy, he has made his intentions to decarbonize the economy known—starting with the early appointment of John Kerry as a Special Presidential Envoy for Climate.

The President has established the new White House Office Domestic Climate Policy. It will be directed by Gina McCarthy, the former EPA Administrator in the Obama administration. Other appointees to the Office include:

Biden sees climate change as both a problem and a solution. The way he attacks the other empirical challenges of our time—contagion, racism, and recession—is perhaps what will distinguish him from all of his predecessors. The nation will see climate policy addressed across the federal agency community.

Within hours of his inaugural speech, the gloves started coming off, and Republican and even some Democratic House and Senate members indicated their opposition to the Biden agenda—starting with his $1.9 trillion COVID-19 recovery plan. The plan includes items, e.g., raising the minimum wage to $15 an hour and student debt forgiveness, they believe ancillary to pandemic relief efforts.

The current bill is the first of two recovery initiatives. The second is expected to focus on the longer-term goals of job creation, infrastructure, climate change, and racial equity.

The road ahead is littered with obstacles and barriers. Will Biden bracket Trump as the best environmental president in history? I think he will. But he’ll need help and not just from members of Congress.

So, readers, I say to you it is morning in America. Not the dark mourning trumpeted four years ago, but the morning of a bright new day. Our mission, should we choose to accept it, is to give meaning to all those surveys that show voters of all parties have heard Earth’s cry and been moved by it.

For there is always light, if only we’re brave enough to see it.

If only we’re brave enough to be it.