It appears that the White House and at least two of the Executive Branch Agencies are not on the same page of the climate change “playbook”. The Administration has clearly enunciated goals of eliminating coal use by 2030, achieving fossil-free electric generation by 2035 and achieving Net Zero CO2 emissions by 2050.

The US Energy Information Administration (EIA) Annual Energy Outlook 2022 projects that petroleum and natural gas will remain the most-used fuels in the United States through 2050, based on consumer preferences, as shown in the graph below.

Note: Biofuels are both shown separately and are included in petroleum and other liquids.

Similarly, the US National Renewable Energy Laboratory (NREL)projects that even what is described as “widespread electrification”, the high growth scenario projects electric consumption growth of 67%, mostly in increased consumption in the transportation sector (EVs). Note that this study is now 4 years old and was conducted during the previous Administration, prior to the goals set by the current Administration. The projected growth of electric consumption is far short of that which would result from the implementation of an “all-electric everything” goal to be achieved by 2050. 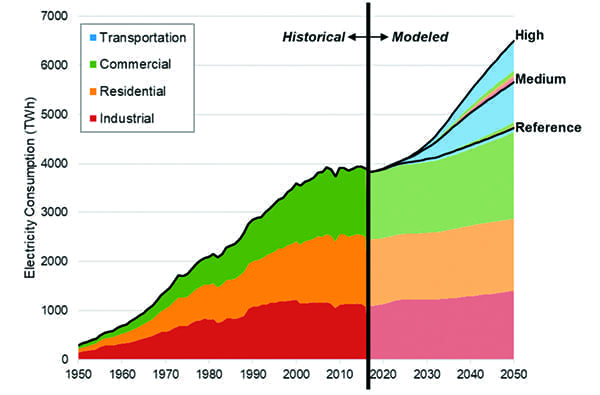 In its June 2018 Electrification Futures Study, the National Renewable Energy Laboratory (NREL) projects that even with “limited impacts” from electrification, U.S. electricity consumption could increase 21% over the 2016–2050 period (using moderate assumptions about technology changes), resulting in a compound growth rate of 0.65% per year. In the medium and high scenarios, which assume “widespread electrification,” electric consumption growth is 45% and 67%, respectively (compound annual growth rates of 1.2% and 1.6%, respectively). Source: NREL

This is not to suggest that these projections could not be changed if consumer preference is superseded by government fiat, as now appears likely to occur. However, replacement of three-quarters of projected future energy consumption with renewables plus storage would be a massive and extremely expensive undertaking. It would include abandonment in place of more than $50 trillion of fossil fuels, abandonment of large numbers of coal and natural gas generators before the ends of their useful lives and the installation of more than 1,000 GW of new wind and solar generating capacity (actual, not nameplate) plus storage capacity sufficient to carry the grid through the longest anticipated wind or solar “drought”. The storage technology required by this transition is not currently available.

It's worth noting that EIA's forecasts relate to what will happen under current market conditions and policies. They aren't forecasting what would happen to those numbers if a new policy proposal gets implemented from the Executive or Legislative branch, and if such a new policy were coming then the forecasts would be adjusted to reflect that.

This is the EIA 2022 AEO. It is inconsistent with current policies, including "Net Zero" by 2050.

I probably share your politics more than you guess. Politicians need to keep away from controlling science, because something is always new to learn.

Here are some cut-and-paste clips from some recent emails;

1. Here are some related links;


The last link shows some goofy guys using an old projection TV Fresnel Lens ("frenel" lens) to melt metals. But perhaps fiber glass roofing incorporating fiber-optic light pipes to get the hot sun off roof tops would gather diffuse (cloudy day) sunlight and direct it into a chemical reactor. And would produce yet another benefit -- air conditioning.

2. Here is an article on foxnews;

A map shows the farm belt as in "High Risk" of blackouts due to too little electric supply. They cite NRECA (rural coops like ours).

I think new science ideas have already caught on globally that are not included in your charts. New science should be important in a very competent, very competitive, new world. Many scientists simply have a lot of work to do, quickly, quietly.