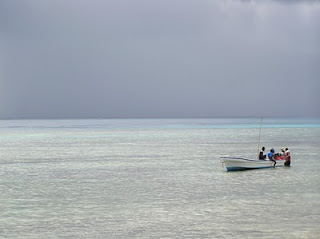 There is a storm brewing in the climate change world. Climate policy efforts are in disarray. There’s a chance that the Congress, energized by new leadership that questions the scientific evidence for climate change, will hold hearings to investigate scientific practices. Climate scientists are preparing to defend their field.

Will the climate blogs help mediate this coming debate? Or amplify it?

I began thinking about this after seeing highlights from the Rally to Restore Sanity. If there is one forum that needs some sanity restoration, it is the climate blogs (science and political ones). Blogs highlight the extremes of the other side. Bloggers call each other names. Bloggers get grandiose and self-righteous.

Yes, absolutely, you can blame the medium. It is impersonal. It is easy to be extreme when the opponent is a collection of pixels and text rather than a living, breathing person. Plus, blogging only works if you have readers. And more controversy equals more page views.

But add it all up, and what do you get?

Just as political pundits focus on political maneuvering rather than actual policy debates, many bloggers focus on bashing each other rather than discussing the issues. We do so because it appears that shouting is the best way to get heard. So just as cable news channels have trended towards the extremes and trumped-up scandals to capture the dwindling audience and dwindling advertising dollars, many bloggers end up focusing on the controversies rather than the consensus in part just to stay afloat in a crowded online sea.

If you write nice, reasoned posts, you are less likely to get a gang of dedicated readers. If you insult the skeptics or question the scientists, the readers will come. Michael Tobis has been caught up recently; he wrote a very reasoned critique of misguided uncertainty discussion by another blogger – but it was the vitriol at the end that drew all the attention. The personalities become the subject. The medium becomes the… ok, a Canadian can never get far into a media conversation without quoting Marshall McLuhan. No particular person is to blame for the dynamic and no one is entirely immune. I’ve fallen in myself on a number of occasions.

The question we have to ask is this:

What do we hope to accomplish by blogging? Do we want to play “inside baseball”, or do we want more people to pay attention to the game? I may be wrong, but I’d guess that most of the science bloggers began their blog with an aim to educate people about climate change and to foster discussion on science and policy. Sure, there’s some subconscious pleas for attention and what not at work, but I’ll trust that bloggers of every stripe honestly believed their blog would improve the public discussion.

Is it working? I’d argue that the escalation of tone is not expanding the conservation on climate change. Everyone in the room is just shouting louder at each other. There’s no better way to alienate the broader public.

Behind the name calling and vitriol lies some neglected, one might even say inconvenient, truths.

You can think climate “skeptics” (or “alarmists”) are wrong, without thinking they are evil and/or in it for the money.

You can deconstruct an argument, without abusing the source.

You can trust the scientific consensus, but not be an alarmist.

You can agree with many of Joe Romm’s arguments, but disagree with his abrasive style.

You can disagree with Roger Pielke Jr. or Judith Curry most of the time, but agree with them sometimes.

You can know that the East Anglia e-mails have zero impact on the science of climate change and did not warrant one percent of the media coverage, but still be irritated with some of the scientists involved for the tone they used in a few of the messages.

You can agree with public statements by climate scientists about climate action, but think they are the wrong people to make such statements.

You can trust the scientific consensus on climate change, but not believe that action is necessary. That may not be my personal judgment on the matter but I accept that the decision on climate action is about more than science.

And, yes, you can disagree with this post (and claim I’ve set up a straw blogger), but still give it some thought.

Hi Simon,  Thank you for the thoughtful post on a topic we think about a lot at The Energy Collective.  As our audience has grown, with a 600% increase in unique visitors over the past year or so, we review content submitted from a spectrum of blogger tones and styles and grapple with these questions daily in selecting posts to feature.

A major challenge for any blogger in this arena is the sheer number of climate (and energy) blogs of vastly varying quality.  Add to that an increasing number of important social media mediums to broadcast ideas and premium for the number of Twitter, Facebook, etc. followers.  As the market for ideas floods with competition for attention, there is a natural tendency, as you point out, to get louder and perhaps more critical of other bloggers, with the impersonal computer screen medium probably exacerbating the trend.  I think this is particularly acute towards the tails of the distribution of very strong political and/or technology preferences.

What is the impact of all of the noise?  On a positive note, it makes even-handed bloggers who are thorough, including our Advisory board members, even more valuable and trusted to readers.  The value of their analysis increases and a small number of trusted blogs are amplified, appropriately and to good end.

But it is critical to ask who these bloggers are reaching and whether, as you say, it is an “inside baseball” game or one that welcomes interested readers from outside the core.  Does more noise make it easier or harder for the best thinking to rise to the top in the competition for bandwidth?

I’m not sure if you met him when we overlaped at Princeton, but a Politics professor here, Marcus Prior, wrote an execellent book “Post-Broadcast Democracy,” focused on TV broadcasting, which analyzes the same issues.  More extreme political polarization in the U.S. has tracked with increasingly specialized consumption of news and information, with those who disagree with each other rarely operating in the same arenas.

I hope all is well with you at UBC!   Best, Rebecca