China's Charging Up Electric Vehicles: Here's How That Will Speed Up Sales Worldwide. Chinese consumers are on track to buy more than 1 million electric vehicles (EVs) this year after sales grew 53% in 2017.  And China’s leadership is charting a course to an all-electric future, targeting 2 million annual EV sales by 2020 and a complete ban on internal-combustion engines, which officials predicts will happen before 2040.

As China’s manufacturing prowess grows, technology costs will fall as has occurred with solar power.  As a result, more affordable EVs will be more widely available, sooner than expected for consumers.

This trend is already taking shape. While China’s EV sales growth is impressive, a global view reveals strong expansion in other countries, with global sales consistently rising in multiple nations to their highest levels in 2017. 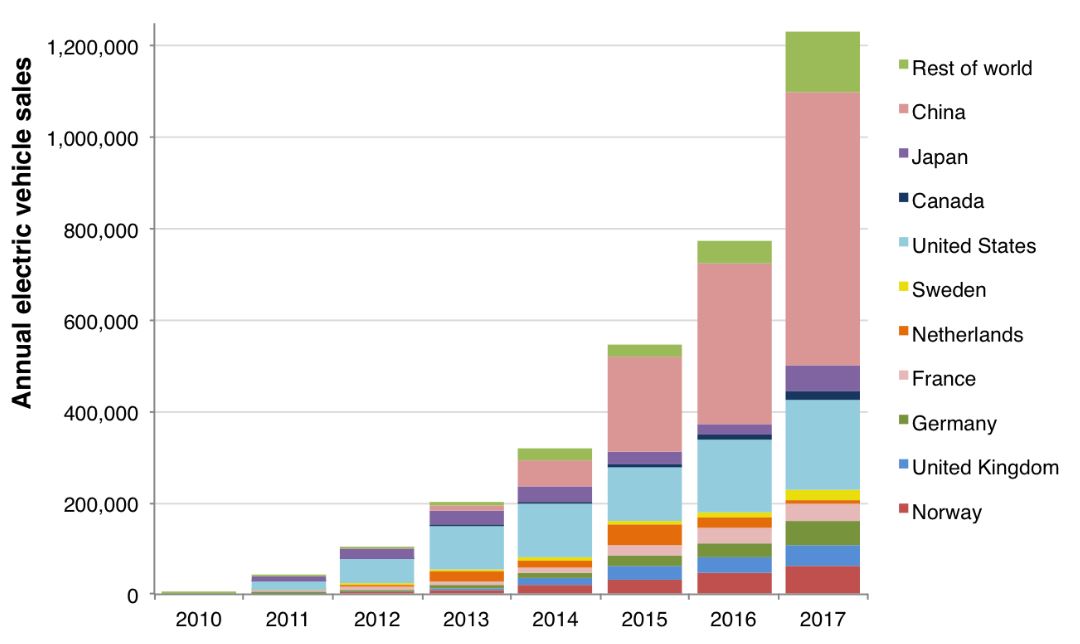 China sees a strategic economic opportunity in EVs, and wants to lead in a new technology that most analysts expect will dominate the global transportation market. Bloomberg New Energy Finance (BNEF) forecasts EV sales will increase to 11 million EVs sold worldwide in 2025, 30 million in 2030, and 60 million in 2040 as manufacturing costs fall below those of internal combustion engine vehicles.

hina surpassed the United States as the world’s largest oil importer in 2017, so electrifying transportation also improves energy security.  Dependence on imported fuel with prices set in a global market creates security and economic risks for China’s government and consumers.  China is the world’s largest market with 30% of global sales, up from 10% in 2007 – so energy demands due to vehicles will not decline anytime soon.  Shifting to electricity, which is almost entirely domestically sourced, reduces oil price spike exposure.

Finally, electrifying transportation is a key to solving China’s environmental concerns. Vehicle emissions are one of the fastest-growing sources of pollution in China and more cars are sold there than anywhere else.  A radical reduction in tailpipe emissions is essential for China’s government to address discontent caused by urban smog levels.

China’s citizenry is demanding cleaner air, and EVs provide zero tailpipe emissions.  China will need to continue building up its renewable energy to ensure these cars are cleaner when electricity grid emissions are factored in, and they have made clear their plans to do so.  EVs are an asset in modern, clean electricity grids, increasing their reliability and efficiency.

The Power of Learning Curves

As China’s EV demand and manufacturing expand, global EV prices will continue to fall due to what innovation scholars call learning curves.  Solar power’s fast-falling costs get all the attention, but important progress has occurred across a range of clean energy technologies.

Batteries, which are the biggest single cost in an EV, have followed a price reduction pathway similar to other technologies, and battery costs are projected to decline by almost half over the next five years. These results should not be a surprise.  Recent science has established ever more clearly the predictability of technological progress for commercially viable products. 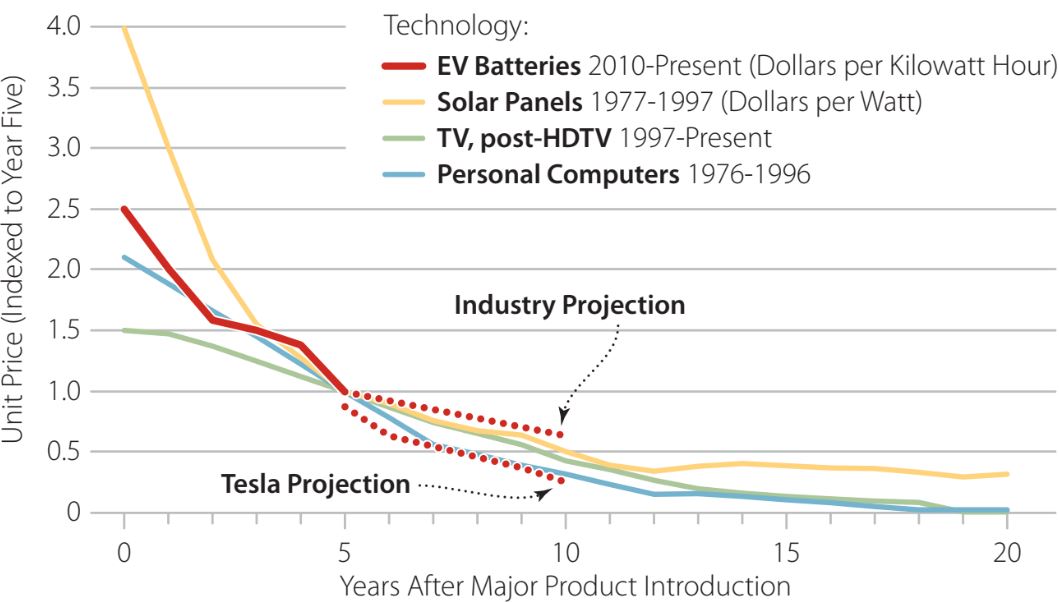 Power and near magic exists in the special sauce of learning by doing, throughout the production process from design to manufacturing optimization.  As market uptake progresses, steady innovation occurs in cost and efficiency.  Renewable energy may get all the attention, but the story is a common one, and China is already demonstrating its commitments and the potential for electric buses.

As manufacturing expands, supply chains mature, and costs decline, the EV industry will overcome current supply limitations.  Prospective Tesla Model 3 buyers have faced delays of anywhere from six months to more than a year and Chevy Bolt buyers in the Toronto area confront a waiting list of at least one year.  While this partly reflects the costs of new factories and the time and expertise it takes to build up supply chains, these shortages are also an indicator of latent demand for EVs

If more EVs were available at dealerships and if dealers were to market them with enthusiasm, sales would be much higher, indicated by scholarly research and journalistic reporting.

Any optimistic EV outlook must also recognize the hurdles and technical challenges to a major transition to electrification.  Recharging batteries still takes too long, even with the fastest chargers, and infrastructure will need to expand, especially for apartment dwellers without dedicated home garage chargers.  But these problems are solvable – China’s utilities expect to have 500,000 public EV charging stations online by 2020 and multiple U.S. states are developing interstate charging corridors.

China’s EV investments, commitments, and ambitions will ultimately help overcome these obstacles.  For entirely understandable domestic reasons, China is pushing forward on this industry of global importance.  Through cooperation on climate change goals and friendly and fair competition, the full potential benefits from a new and better electrified mobility system can be realized.

China’s in the EV Market Lead, but the Future is up for Grabs

Though China has established an early lead, the EV market and the manufacturing jobs it will create are still up for grabs.  For instance, while BNEF expects China to lead the EV transition with nearly 50% of global EV sales in 2025, it expects that percentage to fall to 39% by 2030 as other global markets accelerate. In America alone, EVs could compose up to 75% of new light duty vehicle sales by 2050.

This sales opportunity is already boosting U.S. fortunes. Despite much attention on slower than forecasted Model 3 production, California’s vehicle export growth numbers speak for themselves, up from 600 million in car exports in 2013 to over $3 billion in 2017.  Many other promising domestic electrified transportation technologies and companies are poised for similar growth.

Major automakers are moving toward this sales opportunity. GM CEO Mary Barra recently statedshe “sees an all-electric future” and the company estimates EV sales will be profitable without subsides by 2021. GM’s not alone – major global automakers like Volkswagen, Daimler, Nissan, Volvo, and many more are planning aggressive EV expansions in the next decade.  From major automakers to entire countries, serious momentum exists for EVs, reflected in consumer choices and business investments.

The U.S. is still one of the world’s great car manufacturers and the undisputed leader in advanced technology.  However, it will take smart public policy to channel the creative energy of American entrepreneurs.  While this is happening in state capitals around the country, stronger national leadership would surely increase American prospects for success in surging markets for clean technologies.