China should comfortably meet its 2030 Renewables target. But its emissions?

The long Covid lockdown seems to have had little effect on China’s electricity generation growth. In 2021, total generation increased by about 750 TWh (that’s around 1.3 times Germany’s absolute total). Solar PV capacity grew by 53 GW last year (equal to the total installed solar capacity in Germany). Half of all offshore wind turbines installed worldwide in 2021 were off the coast of China: the strong additions were accelerated by the January 1st 2022 drop in the feed-in tariff for offshore turbines to the low tariff received by coal-fired power plants. That tariff drop surely speaks of China’s confidence in renewables. Simon Göss at cr.hub runs through the headline figures and suggests that China will comfortably meet its 2030 renewables target. But the share of generation from thermal power plants (90% coal) only declined by one point to 67%. So the prospects for China’s “Dual Carbon” targets of an emissions peak by 2030 and carbon neutrality by 2060 are still unknown. It’s no longer a surprise, but still worth stating: given its scale, what China does affects us all.

The economic slump caused by Corona seems to have had little impact on energy consumption in 2021, at least in China. Thus, electricity consumption increased to almost 8,400 TWh. At the same time, the shares of renewable energies also increased even if the addition could not reach the peak values of 2020.

Electricity generation in the world’s most populous country rose to a new record high of 8,377 TWh in 2021. Compared to the previous year, generation increased by about 750 TWh. This is about 1.3 times Germany’s total electricity generation last year and once again highlights the sheer size and relevance of China to all global energy and climate objectives. The first preliminary energy figures from China for 2021 can be viewed at the China Energy Portal. 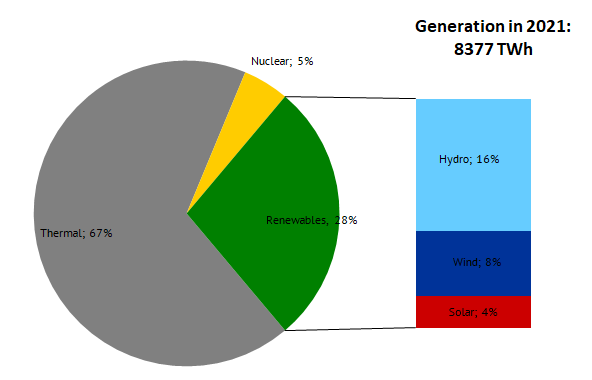 However, thermal power plants provided the bulk of the additional electricity generation of 750 TWh last year. Generation from coal and gas-fired power plants increased by 9 percent year-on-year, or nearly 470 TWh. Renewables, on the other hand, contributed only about one-third of the total growth in electricity generation, 240 TWh. The growth in renewables was primarily enabled by wind power, while generation from hydropower decreased compared with the previous year due to climatic conditions.

Generation from nuclear power plants also made a jump, increasing by about 41 TWh compared to 2020 to a total of over 400 TWh. The year-to-year change in generation from different technologies between 2020 and 2021 is shown in Figure 2. 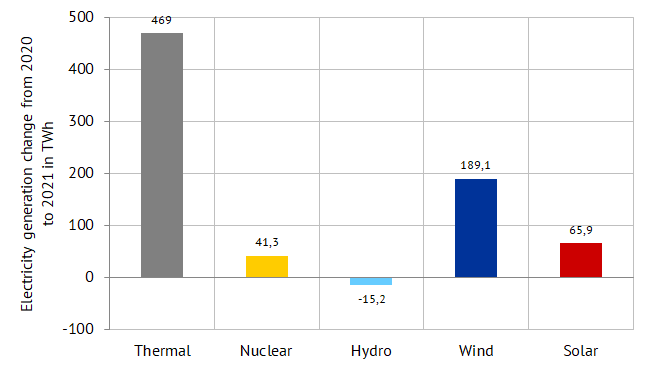 Renewables expansion weaker than in 2020

The large increase in wind power generation in 2021 was made possible primarily because a record 72 GW of wind power was installed in 2020. Click here for more detail about the changes in China’s power system in 2020.

Such high capacity growth was not possible for wind energy in 2021, but PV capacity grew by 53 GW last year. This is roughly equivalent to the total installed solar capacity in Germany. Hydropower also expanded comparatively strongly in 2021, increasing by 21 GW. However, the capacity of thermal conventional power plants also increased by around 50 GW. The annual increases in renewable energy capacity can be seen in Figure 4. 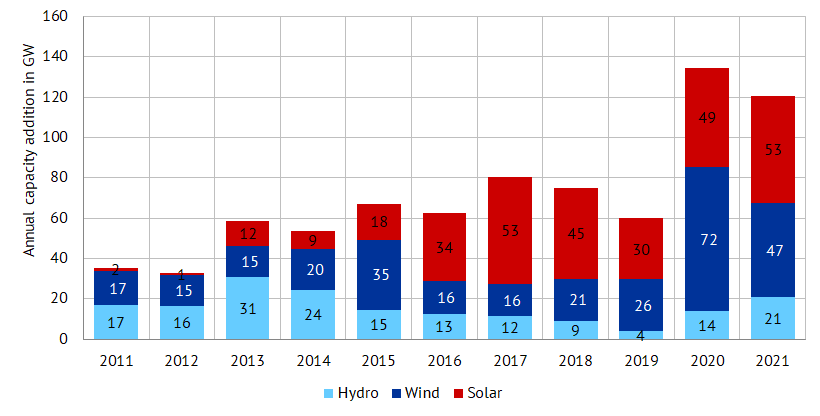 The addition of offshore wind power stood out particularly in China in 2021. Last year the capacity grew from less than 10 GW to 26.4 GW, an increase of almost 17 GW. This required the installation of 30 large offshore turbines every week (source: Carbon Brief). Half of all offshore wind turbines installed worldwide are now off the coast of China as of the end of 2021 (source: Forbes).

The strong additions in 2021 were driven by the coming drop in the feed-in tariff for offshore wind turbines from 850 yuan/MWh ($134/MWh) as of January 1, 2022, to the low tariff also received by coal-fired power plants (source: IHS Markit).

Renewables on target for 2030

China continued to account for a large share of the world’s installed renewable energy in 2021. China’s hydro, wind, and solar generation capacity exceeded the 1,000 GW threshold last year. Thus, China should easily meet its target of 1,200 GW of renewable capacity by 2030. It could also be exceeded by 300 GW with today’s expansion figures. The development since 2010 is shown in Figure 5. 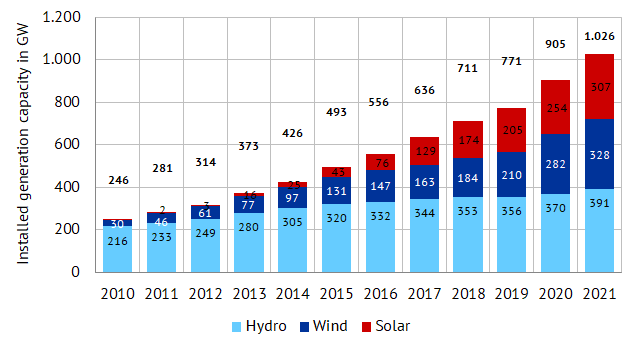 In 2021, as in 2020, the largest share of renewable capacity additions in China took place in the last quarter. With a total of 31 GW of newly installed capacity in wind and 28 GW in PV, China added 50 to 60 percent of the total annual additions in the fourth quarter of 2021. In addition to the drop in offshore wind feed-in tariffs to the new year, the end of a feed-in tariff for residential PV on December 31, 2021 (source: IHS Markit) was also key to the installation run in the last three months of the year (see Figure 6). 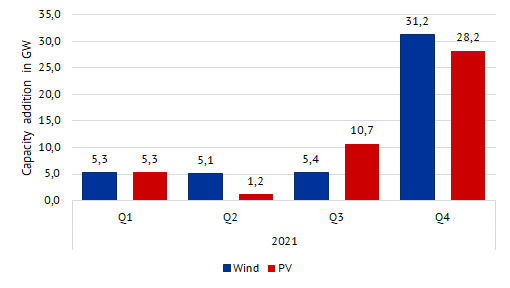 Figure 6: Wind and PV additions in GW by quarter in 2021 / SOURCE: Energy Brainpool

After the emission trading system in China started in July 2021, more than 1 billion yuan or $165m of pollution rights have been turned over by the end of 2021. So far, there is still no cap on the allowances issued (source: Reuters).

Therefore, there were hardly any spectacular price movements in the course of the last year. The price ranged between 41 and 61 yuan/ton or $6 and $9/ton and is thus about one tenth of the price in the European emissions trading system (source: Energymonitor). By 2025, in addition to the electricity sector affected so far, plants from other industries such as steel and cement production are also to be covered by the Chinese emissions trading system.

In 2021, the Chinese government has also increasingly communicated its “dual carbon” target internationally. Firstly, CO2 emissions are to peak in 2030, and secondly, the country is to achieve climate neutrality in 2060. Figure 7 shows the development of CO2 emissions from China’s energy sector (data: OurWorldinData). 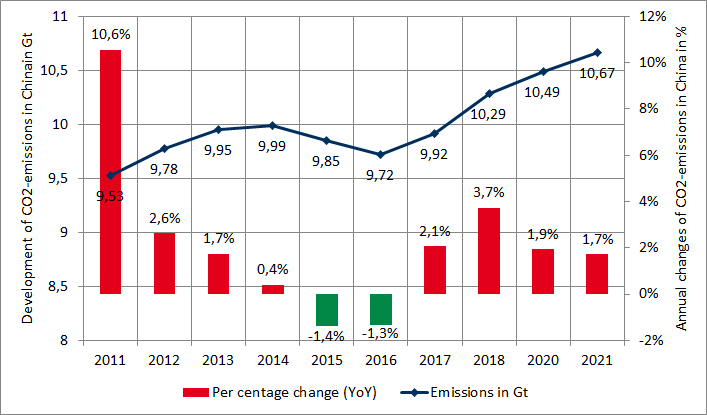 Against this backdrop, however, the country’s energy transformation needs to be significantly strengthened. The first target in 2030 is probably still the easier one.

However, China was not spared from the energy price crisis and scarcity of fossil raw materials in 2021, and some factories and areas of the country had to go without power for a time due to planned load shedding. Whether the situation last autumn will also have an impact on China’s short- and medium-term energy and climate policy beyond 2022 is yet to be seen. However, there is no doubt that the developments in the Asian country will have a major impact on global energy markets.

An important distinction-- and if something goes wrong (economic downturn, supply chain issues, geopolitical unrest-- all of those that are already affecting markets today) and so the renewables target doesn't come to fruition, the emissions target will be even further off