The cornerstone appeal of carbon markets is their ability to cut emissions while creating clean energy investments – but it turns out they may be far more effective at the task than anyone could have ever imagined.

OECD’s research once again shows the power carbon markets can have in fighting climate change and funding clean energy, especially when linked across international systems, and is another example that cap-and-trade is far from dead.

According to the report, the cost of cutting carbon dioxide (CO2) from electricity generation through carbon markets is roughly €10/$13.50 per metric ton on average. Compared to average feed-in tariff costs of  €169/$228.40 and capital subsidies costing €176/$237.80, the potential for rapid decarbonization is evident. 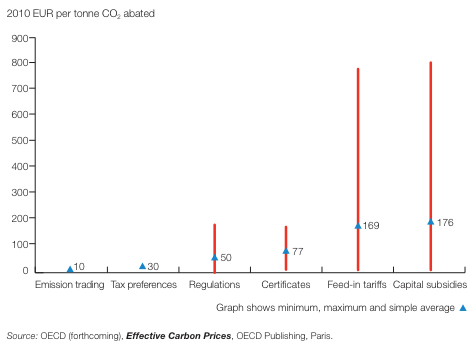 The analysis covers nearly every potential energy market – from developed economy to developing, from high renewables to fossil fuel dependent, and those with mature carbon markets to those just starting out or under consideration.

No “Climate Bailout Option” If We Fail

Considering the Earth has 30 years at most until its carbon budget is exhausted and the planet is locked into dangerous climate change, “consistent carbon pricing must be the cornerstone of government actions to tackle climate change,” says OECD.

By combining policies that include pricing every ton of CO2 emitted, placing an implicit price on emissions, removing fossil fuels subsidies, and transparently operating carbon market functions, OECD maintains both consumers and investors will be incentivized to reduce emissions while offsetting power price increases.

“Cherry-picking a few easy policy measures is not enough…and we don’t have any time to waste,” said Angel Gurria, OECD Secretary-General. “Unlike the financial crisis, we do not have a climate bailout option up our sleeves.”

But beyond the world’s carbon budget, OECD’s analysis also tackles the carbon bubble – the potential financial meltdown that could occur when fossil fuel corporations and the investments that depend on their stability are suddenly devalued as a result of proven reserves coming off balance sheets as they’re forced to remain in the ground as “unburnable assets.”

By one OECD-cited estimate alone, over 55% of pension fund portfolios is invested in high-carbon assets or sectors greatly exposed to climate change-related regulation – forcing a decision of “either stranding those assets or stranding the planet.” This figure doesn’t even consider the $523 billion in fossil fuel subsides governments paid in 2011: How well would Big Oil perform without that support? 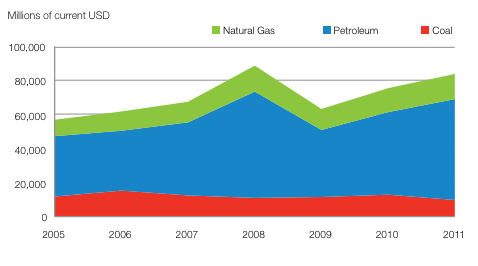 In addition, governments face a “carbon entanglement” where they hold a major stake in bringing fossil fuels to market and being paid their share of the profits – around $200 billion annually from royalty payments and taxes on oil and natural gas in OECD states alone.

And that’s where dedicated revenue from the transition to a clean energy economy comes in. Carbon markets are pouring money into energy efficiency, climate mitigation, and renewable energy projects across the world. With roughly 60 carbon pricing systems currently in place or under development, a clear path forward is apparent – if governments choose to make the right policy decisions.

“We are on a collision course with nature, and we need to take bold decisions to change that path,” concluded Gurria. “ There is only one way forward – governments need to put together the optimal policy mix to eliminate emissions from fossil fuels.”

Well, it is nice to see a clear quantification of the blindingly obvious fact that the continued technology forcing advocated by most renewable energy advocates is many times less cost effecitive at cutting CO2 emissions than a technology-neutral market mechanism.

About the “carbon bubble”, I highly doubt that the world (especially the developing world that will be responsible for 75% of global emissions by 2030) will be willing/able to leave the majority of economically recoverable fossil fuels in the ground. The immediate social and economic repurcussions would simply be far too great.

Human motivation is very short-term in nature and the 6 billion people living in developing countries still have lots and lots of short-term benefits to gain from fossil fuel-driven economic growth. Unless we see some technology that can drive this massive development more efficiently than fossil fuels (which is highly unlikely), economically recoverable fossil fuels will be burnt.

Wouldn’t everybody just pay more to continue to burn fossil fuels? Then, that funding should go into the “best” low carbon technology, but it will only be like a 17th of what’s needed to really go low carbon? Perhaps, this makes that number go down due to more market based investment causing non carbon to become cheaper.

It also has to be international in scope in order to prevent trade mishaps.

The development of  the least expensive, most abundant non carbon source is the ONLY way to save Earth. We need to mandate its approval before we enact carbon laws by easing restrictions and regulations on thorium and REE mining.

I have a beef with proponents of energy taxation because they sometimes go too far, such as what is said in page 23 of the report…

http://www.keepeek.com/Digital-Asset-Management/oecd/environment-and-sustainable-development/climate-and-carbon_5k3z11hjg6r7-en#page26 “Energy taxes are levied on a wide range of energy forms, not just on fossil fuels” (to influence energy use patterns)…

Actually, additional energy usage patterns should be encouraged if from non fossil sources for obvious economic and thus positively supportive environmental reasons. I thus present the rational to declare as inhumane and unlawful to include energy taxes on non carbon (that is low carbon) sources, and to seek to ridicule any that opposes.

Another possible unwanted outcome from carbon taxes that we must expose is that of induced CCS in the place of actual low carbon sources. Which is better, concentrated CO2 in the ground (water?) or good ole clean electricity and batteries?

I therefore understand the importance of the CO2 tax or trade, only if it is clean.

Suppose we could wave a magic wand and wake up tommorow to a world with a stable human population of 4 billion people all consuming at the current standard of the OECD middle class, with a debt load that could easily be supported by a 2 to 3 percent real growth rate in ecomomic production. What are the chances that we would reach an agreement to  rebuild our energy infrastructure with sufficient rapidity to leave a significant fraction of the remaining fossil carbon in place?

If that rebuild threated the required growth to keep private debt markets ‘healthy’ then a “snowball’s chance in hell” would be the correct answer for people who regard growth based capitalism as a perfect and eternal form.

The unwillingness of the poorer two thirds of humanity to permanently accept their current inferiority in resource consumption is perfectly understandable, but the idea that once they have caught up to us we will all hold hands and move together towards sustainability is nonsense. If we are not willing to enage in long term thinking today, then there is no reason to believe that a future generation will accept the responsibility either. We will simply temporize and temporize until a social or ecological disaster brings change upon us whether we like it or not.