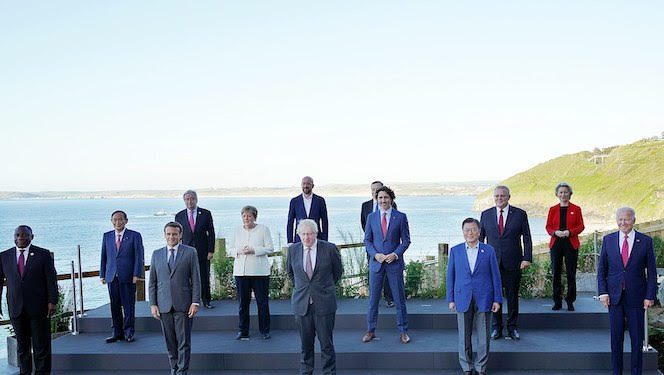 G7 leaders have tied up a weekend summit in Cornwall, United Kingdom that produced a still-vague collective promise on international climate finance, pledges to stop funding international coal projects next year and to “strive” to shift vehicles off fossil fuels, a still-nascent sustainable infrastructure investment plan for developing countries, and a disappointing effort on global vaccine equity.

“It was the first time the major industrialized economies, which are most responsible for the pollution that is warming the planet, agreed to collectively slash their emissions by 2030, although several nations had individually set those same goals,” the New York Times reports. “But energy experts said the failure of the G7 nations, which together produce about a quarter of the world’s climate pollution, to agree on a specific end date for the use of coal weakened their ability to lean on China to curb its still-growing coal use. It may also make it more difficult to convince 200 nations to strike a bold climate agreement at a United Nations summit in Scotland later this year.”

Politico is pointing a finger at the United States and China as the two countries that blocked a deal on coal after days of negotiation. “The Biden administration—fixated on cultivating the Democrats’ razor-thin Senate majority and the coal mining sympathies of West Virginia Senator Joe Manchin—was wary of any language specifically clamping down on coal,” the news story states.

And the G7 “backed away from plans to set a target for making sure most new cars sold are greener vehicles, instead pledging only speed up efforts to move away from combustion engines,” Bloomberg Green writes. “In the final communique Sunday, the bloc included an autos section that was far more modest than earlier versions being discussed.”

The outcome on climate finance was fairly solid for Canada but fell short for the G7, with key countries failing to step up to their share of the US$100 billion per year they’d promised by 2020. Yesterday, Prime Minister Justin Trudeau announced Canada will increase its climate finance contribution to C$5.3 billion over five years, raise the proportion of that financing provided as grants rather than loans from 30 to 40%, and boost the share available for climate adaptation and nature-based climate solutions.

“At the end of the day, the $100 billion is a joint pledge, and no individual performance can cover up the fact that they’re still failing to meet the target,” when it “should have been met in 2020,” he told The Energy Mix.

Oxfam Canada Policy Specialist Anya Knechtel called the Trudeau government’s decision to double its climate finance commitment from the C$2.65 billion it put up in 2015 “the minimum Canada could do to respond to the global climate crisis. We look forward to seeing how this support can reach women and other at-risk people in developing countries to respond and adapt to climate change. Ultimately, the true value of this investment will be determined by how effective it is in building women’s and other vulnerable peoples’ resilience and ability to cope with the increasingly adverse effects of climate change.”

Canada’s fair share contribution to international climate finance is generally calculated at US$4 billion from private and public sources. With C$1.8 billion of that total expected to come from governments, Knechtel said in an email, yesterday’s federal commitment falls short by $740 million per year.

In a release, Oxfam expressed concern that more than half of Canada’s pledge still consists of loans, not grants. “For developing countries that are already strapped by spiraling debt due to COVID-19, grants are critical to enabling climate action,” the organization stated. But “it is not clear whether Canada will target today’s increased grants to much-needed financing for adaptation.”

Pérez said the loans in Canada’s climate finance package will likely be directed to climate mitigation projects in middle-income countries, leaving the outright grants for efforts to help small island states and least-developed countries adapt to the impacts of the climate crisis.

In contrast to the previous financing package, which was delivered almost entirely through multilateral development banks, Pérez said it’ll be good news if Canada distributes its increased contribution through a variety of funding channels. “If Canada’s larger portfolio goes through channels that are more balanced between grants and loans, between adaptation and mitigation, it offers a much more comprehensive package that responds to the needs of the Global South, not to the needs of the Canadian private sector or of Canada,” he explained. “That’s what matters. It’s not necessarily the instrument, but how the money’s being spent, who it’s being spent for, and why these funds are being allocated through these different channels.”

While loans can sometimes play a useful role in mobilizing private investment for climate mitigation projects, grants “are extremely important because adaptation needs are increasing,” he added. “So what’s needed at this moment is for Canada to have a much more balanced climate finance portfolio.”

With the federal government directing C$13.2 billion in public finance to fossil fuel companies in 2020—not including funding streams that Export Development Canada (EDC) could not or would not quantify in public data—Pérez agreed the country’s funding priorities are still out of whack. “Canada should always be criticized for its ongoing investment in fossil fuel subsidies, and it should not use public Crown corporations to finance climate finance, then add fuel to the fire [by financing fossil fuel projects] in the Global South.”

But this week’s climate pledge still “offers the opportunity for Canada to do better,” he stressed. “We’re coming from a very low climate finance performance, actually trying to catch up to other countries that are doing much better, and this is a new chapter for Canada to make those transformational changes. The first is to uphold our obligations when it comes to international climate finance, and the second is financing the right things,” by aligning overseas development assistance and public financing through agencies like EDC with the 1.5°C target in the Paris Agreement.

Among the seven countries represented at the summit, Pérez said Germany has been one of the “best performers” on climate finance and still has scope to increase its pledge. But the United States is still catching up to its fair share contribution, even after President Joe Biden doubled his country’s commitment over the weekend. Italy, despite its role as this year’s G20 president, made no promise of new funding, while Japan made a statement that was short on detail.

Summit host and UK Prime Minister Boris Johnson said those individual commitments will follow “in due course,” Reuters reports. Climate organizers, many of whom had spent weeks pushing for a better result, were less than impressed with a final summit communiqué that declared 2021 a “turning point for our planet”, but contained few specifics on how the G7 countries would cut emissions, phase out coal-fired power generation, or shift transportation to electric vehicles.

“We had hoped that the leaders of the world’s richest nations would come away from this week having put their money their mouth is,” said Catherine Pettengell, director of Climate Action Network-UK.

But “#G7 leaders have missed the boat in Cornwall on climate action and setting up success at COP 26,” she tweeted. “Despite talking about the scale of the crisis, few concrete outcomes have been achieved. Urgent action is now needed to steer a course to COP 26 that will deliver on the Paris Agreement.”

The Associated Press has video of climate protesters gathering on land and sea during the summit.

The E3G consultancy said the G7’s new Build Back Better for the World plan “could be an ambitious sustainable infrastructure investment plan for developing countries to make their recovery from the COVID pandemic climate smart and resilient.” But details of the plan were scarce over the weekend. “To have impact it will require a strong G7 capital package that can shift investment in developing countries from billions to trillions. To make this a reality will require more dialogue with developing countries and a thoughtful approach to working with and alongside China.”

E3G added that the G7’s “US$2-billion commitment to enable poorer countries to transition out of coal strengthens the signal on ending public finance support for coal, heaping pressure on China. But the G7 failed to deliver the significant capital package needed to drive a true global green recovery.”

On vaccines—an all-important matter of humanitarian assistance and solidarity with serious implications for climate action—the G7 came up short, pledging a billion doses for developing countries that are still in the deepest throes of the pandemic and need as many as 11 billion shots to get new variants under control.

“If the best G7 leaders can manage is to donate one billion vaccine doses then this summit will have been a failure,” said Oxfam health policy manager Anna Marriott.

“Charity is not going to fix the colossal vaccine supply crisis,” she told media, adding that the real solution would be a global waiver on patent protections for vaccines. “The G7 should break the pharmaceutical monopolies and insist that vaccine science and know-how is shared with qualified manufacturers around the world.”

“The new U.S. and UK commitments are a step in the right direction, but they don’t go far enough, fast enough,” agreed Alex Harris, director of government relations at the UK’s Wellcome health charity. “What the world needs is vaccines now, not later this year. At this historic moment, the G7 must show the political leadership our crisis demands.”

Meanwhile, in its Friday coverage leading into the summit, Politico Europe flagged a shift in emphasis that may place the ultimate limit on the real-world results the G7 can deliver on its own.

“The countries that consider themselves the planet’s natural leaders face an uncomfortable reality at the G7 summit this weekend: The future is not in their hands,” the paper wrote. “Climate change, and the attempt to thwart it, will be decided largely in Beijing, Delhi, Brasilia, Abuja, Pretoria, and Jakarta—capitals already responsible for more carbon pollution than those gathering in Cornwall.”

While the G7 countries are “responsible for the bulk of historical emissions, by dint of cutting down at home while emissions keep rising elsewhere, they now create a dwindling share of planet-heating greenhouse gases,” Politico added. “And meanwhile, power and relevance are shifting from the G7 to the broader G20, or even to countries like Nigeria that have yet to qualify for any of the elite geopolitical clubs.”