With this announcement the list of TX coal closures continues to grow.  Currently there is still about 17.4 GW of coal capacity left in TX and half of this capacity now has an announced closure date.

What would it take to shutdown all of the remaining coal capacity in TX by 2030 and replace the current coal generation without adding new NG plants? 40 GW of new solar capacity in TX or about 4GW/year.

Current capacity of solar in TX is about 4GW and another 4 GW will be added next year. Can this pace be maintained for the full decade? 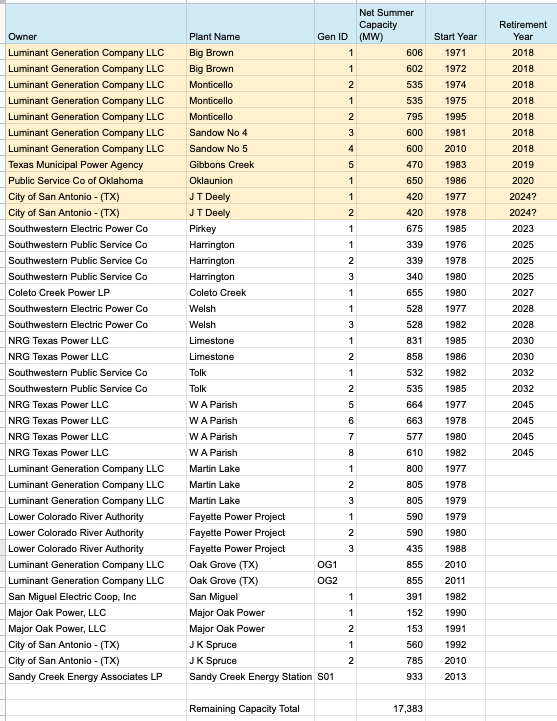 The Coleto Creek Power Plant by 2027.The plant is designed to be a baseload plant, which means it provides enough power to meet energy demands at any time of day, but it has been operating at just 38% capacity in the first nine months of 2020 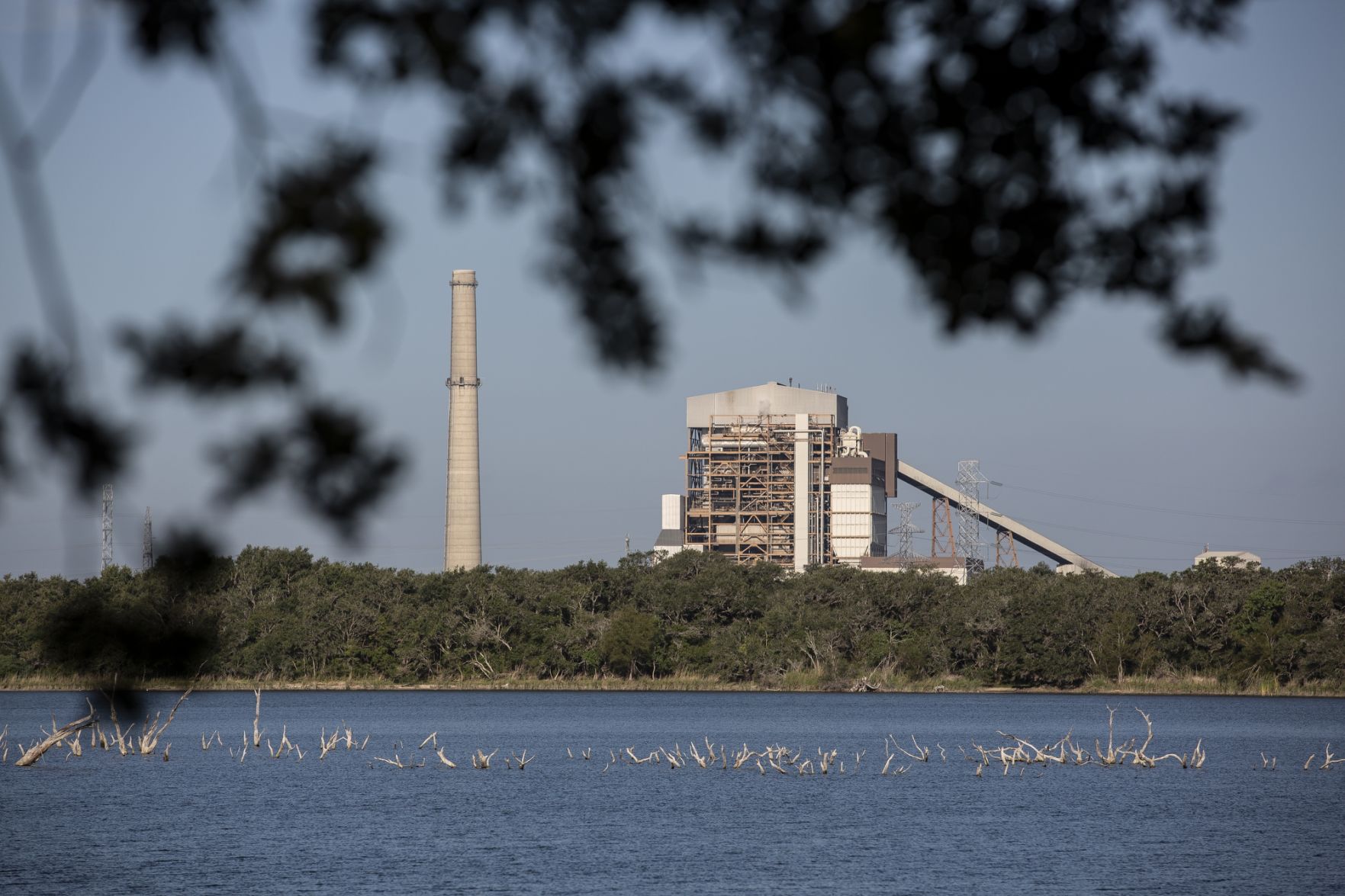 I don't know, but they seem to be doing pretty good with gas:

My bad, graph was upside down

yep... NG usage has recently risen in Texas.  The data over the last decade shows that the rise in wind generation has not been able to offset both the rise in overall generation and the decline in coal generation.

However, now we have two new players in the Texas market - solar & storage. Solar can replace coal generation in TX while wind takes care of any rise in overall generation.

Coal generation will be about 80TWh in TX for 2020. Solar generation from utility facilities will rise by 8TWh in 2021.  Simple math.

Players in the Texas market already know this. Look at the Capacity change by Fuel Chart from ERCOT.  NG capacity is flat over the last couple of years.

Plus there are other signs of change in NG market for Texas.

Luminant to retire another natural gas-fired plant in ERCOT

Luminant will decommission and retire the 69-MW, natural gas-fired Wharton County Generation plant, the Electric Reliability Council of Texas has said. It is the second fossil-fuel plant to be announced for retirement in Texas in as many days.

The facility's 2019 capacity factor was less than 0.9%, and Market Intelligence estimates its operating and maintenance expense at more than $149/MWh.

Zero Carbon share of Texas market will grow even faster over the next decade as NG stays flat and coal share moves toward zero. 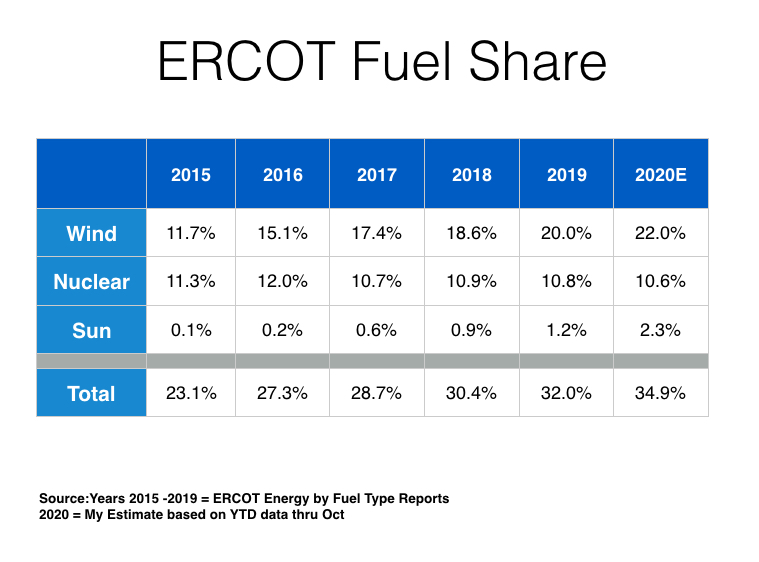 Current capacity of solar in TX is about 4GW and another 4 GW will be added next year. Can this pace be maintained for the full decade?

This is a great question-- and obviously solar would need to likely outbuild that 40 GW capacity since coal is able to serve as a baseline, but by embracing community solar programs, incentivizing private solar installations, and other pro-solar policies I do agree that the resources are available there for TX to keep up the pace.

Not sure what you mean by "baseline" here. On ERCOT coal currently bounces around throughout the day based on demand as well as how much wind is on the grid. Solar, with its current limited capacity has a minor effect on coal generation.

Below you can see a chart showing fuel share on ERCOT grid for the last two weeks. The remaining 17.3 GW of coal is bouncing between 5GW and 11GW of generation.

Over time as more wind and solar are added the coal gen range will move lower, capacity factors will drop and coal plants will be forced to retire. Rinse, repeat.

The current unknown - what will replace the lost coal capacity that is currently needed in early summer evening hours after solar generation drops?

It looks like about 1GW of storage is being built next year in TX. They will need a lot more. 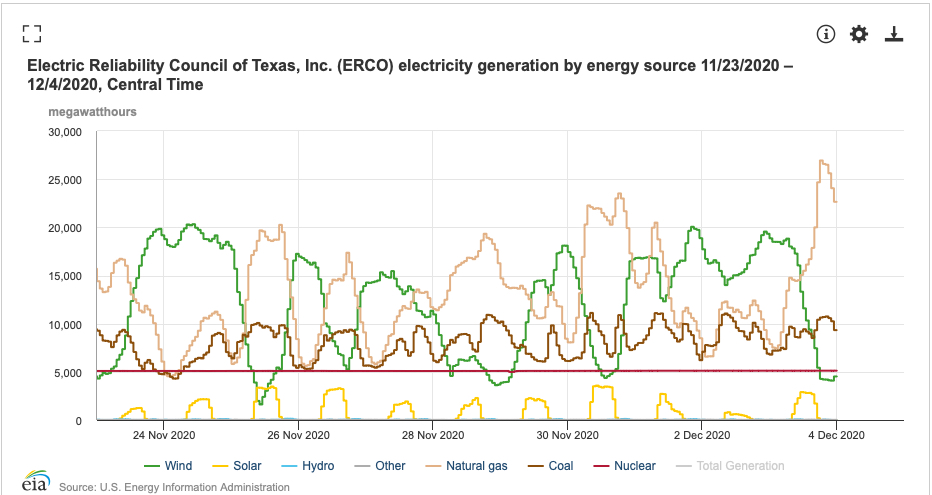 Solar starting to grow in Texas?

According to the LBNL, new solar power installations have outpaced windpower in the US for the past 4 years (2016-2019), but wind has been the dominant renewable in the windy central plains (incl. TX), due to higher capacity factor and similar capital cost.

So why would solar start to grow now in TX?

One reason was that the generous US windpower subsidy was supposed to end at the end of 2020, while the solar subsidy continues a few more years.  However, the wind subsidy got extended one more year due to the pandemic, and may get extended again under Biden (assuming there is an industry left to lobby for it).

A more serious problem for wind is described in the most recent LBNL Wind Tech market report.  With windpower only contributing 20% of the energy on Texas' ERCOT grid, the market value of wind energy is already 43% below the average unit of energy.

California PV system owners are seeing this same price collapse for their product with solar supporting about 16% of the state load.

Note that storage can't solve the price collapse problem, since storage is only economical in markets that have frequent prices swings (i.e. collapse then spike).

Our current "market based" dispatch system makes a lot of sense for a fossil fuel dominated grid, but is questionable for clean energy.  Each supplier bids their marginal cost; bids are accepted from lowest to highest until demand is met for a given time block; then all accepted suppliers get paid the highest accepted bid (not their own bid).   This insures the cheapest fuel and most efficient plants are used first.  If the last bid was $0 priced wind, everyone loses; if the last bid was high cost oil, everyone wins.  But in order for all suppliers to make a profit (not just pay for fuel), the system needs high priced bidders (e.g. oil-fired generators, out-of-state traders, or demand-response providers) to win part of the time.  Hence it is "economical" to create artificial power shortages by closing plants which are highly polluting (coal) or politically unpopular (nuclear), as this drives up wholesale prices.

Many countries use a feed-in tariff system for clean energy instead, wherein the feed-in price paid is set prior to new plant construction, via an auction or other process.  The US subsidy system shifts the burden of the clean energy premium to tax-payers instead of electricity buyers; the German system is funded by electricity buyers, but shifts the cost to homeowners instead of industry.  The British are considering other alternatives to the market dispatch system in order to support new nuclear development.  It will be interesting to see what they come up with.

Thanks for the LBNL report link - great resource.

Solar is definitely more valuable on ERCOT currently as wind tends to peak in evening/night hours and peak demand is mid/late afternoon.

That said - let's see what happens to value of wind as the 17.3 GW of coal on grid continue to drop off and wind has less competition.

Market prices tend to go negative when there is low consumer demand and the thermal generators that have chosen to remain online cannot be backed down further to allow the available, lower-cost wind generation to serve consumer demand.

Interestingly, there was somewhat of a flip in ERCOT November data - which was recently released.  Instead of displacing coal - the additional solar and wind actually displaced NG in November.  Not sure what was going on there... will have to see if that trend continues.

Note: also interesting to see the large chunk of NG simple cycle that was replaced this year. Will solar/storage continue that trend? 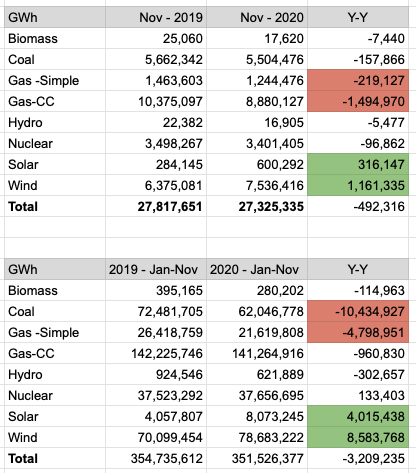 Large amounts of solar and wind coming onto ERCOT grid over the next 24 months - plenty of coal and NG to replace.

Uncovering the Corruption in the Utilities Sector: How Monopolies and Government Ties Fuel Greed and Misuse of Ratepayer Money
Thelma and Louise: Are Utilities Driving Energy Production Off a Cliff?
Global Low-Carbon Energy Technology Investment Surges Past $1 Trillion for the First Time
Embracing the Future: How Utilities Can Leverage Distributed Energy Resources for Success