California's "Other Big One": A Historical Flood? 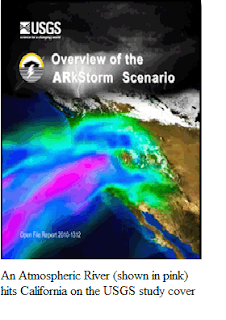 Many willl be surprised as it dawns that the biggest catastrophic event likely to happen today in California is a flood caused by a rainstorm.

An article in the January 2013 Scientific American has a good summary of the evidence.  Today’s LA Observed published an article that serves as a good (short) introduction to what is in the Sci-Am.

The US Geological Survey recently studied flood risk in California by modelling what would happen if the state was hit by an event about one half as severe as the greatest flood to have happened in the state since it was settled by Europeans, i.e. the Great Flood of 1861-62.  They also assessed earthquake risk:  a magnitude 7.8 on the San Andreas.  According to the USGS, each of these scenarios has “roughly the same annual occurrence probability”.

The newly observed weather phenomena called Atmospheric Rivers (“AR” for short) explains how this much water can suddenly appear. Residents of the West Coast think that when the weather report says a Pineapple Express is coming it means a lot of rain. It turns out scientists now believe Pineapple Express events are just tiny, garden variety examples of ARs. A “Big One” directs as much water as 15 Mississippi Rivers on a section of coastline 250 miles across and continues to do this for months. There is evidence in Californian sediments of an event around the year 1600 that was 50% larger than the 1861-62 flood.

Unlike earthquake risk, which is thought to be unaffected by anything humans can do, increased extreme weather event flood risk is one of the more robust predictions of climate science. Scientists have examined seven state of the art climate models to get some idea of what future extreme Atmospheric Rivers will be like:

Every model they looked at spits out ARs “bigger than any of the historic megastorms”.

I live near Seattle.  I’ve often wondered what we and our descendants face if we continue to live in this area as climate change proceeds.

Its one thing for the USGS to select their ARkStorm scenario that assumes an AR one half as severe as what they know for certain has happened before in California because such an event has roughly the same chance of happening as a 7.8 magnitude earthquake on the San Andreas.

But it seems preposterous to avoid considering what scientists actually believe could arrive one day because, as the authors of the Sci-Am article put it, “so no one could claim the scenario was unrealistic”.  The records in sediments in California of the year 1600 flood which was at least 50% greater than the event of 1861-62 indicate that something at least 3 times the size of the ARkStorm could show up one day, especially given those seven climate models all spitting out ARs “bigger than any of the historic megastorms”.

What are these great floods?   Chopped liver?

When the ARkStorm scenario first came out, Jeff Masters wrote it up for his WunderBlog.  He said the USGS was saying their dumbed down 1/3 the size of what scientists believe has actually hit California previously ARkStorm, if one like it hit today’s California, would be the “most expensive disaster in world history“, costing $750 billion.  The actual “Big One” not considered is going to cost something a bit north of that.  It might even cost several of those new $1 trillion coins.

Food for thought.  It looks like people living on North America’s West Coast, or on any West Coast of a continent on the planet for that matter, can think about Atmospheric Rivers the way people on hurricane coasts think about hurricanes.

There’s a Big One out there that’s going to arrive one day.

References, and the “P.S” Department:

An online supplement to the Sci-Am article describes the 1861-62 Great Flood event in greater detail.

The authors of the Sci-Am article have a book coming out: “The West Without Water:  What Past Floods, Droughts, and other Climatic Clues Tell Us about Tomorrow” that will be available June 1. 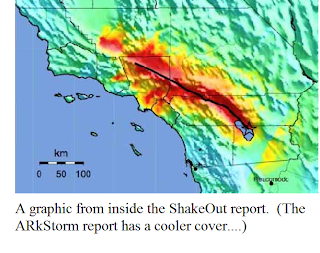 The USGS earthquake scenario was based on a magnitude 7.8 event strking the San Andreas Fault in Southern California.  The USGS study, a.k.a. ShakeOut, is here.

The ARkStorm acronym contains “AR” for Atmospheric River.  The “k” alludes to the fact people seem to like to refer to catastrophic extreme weather events outside living memory as once in a thousand years events.  The “Storm” part is for, duh, storm.  The scientists involved clearly understood that their theoretical Atmospheric River event will happen far more frequently than once every thousand years.  The sedimentary record is assessed as showing a Big One every 200 years or so, with the biggest in the 1,000 year record 3 times the size of the ARkStorm.

At this year’s AGU Fall Meeting in San Francisco there was a presentation on Atmospheric Rivers that was briefly available online as a video.  I stripped out the audio and recorded that for study, but I can’t find the video online now.

A number of people presented various aspects of what they wanted people to hear.  One thing that caught my attention was the fact they did not mention that they had examined the seven climate models, and so, obviously, they did not mention that all models examined spit out ARs bigger than anything in the historic record, until the Q&A.  So they aren’t trying to scare everyone with tales of some big bad AR, which caused me to wonder why.  When I realized the ARkStorm scenario was something far smaller than what they could prove had happened before, and that the event they could prove with historic photos was dwarfed by an event recorded in the sedimentary record, yet they still had the “k” denoting thousand year storm in their ARkStorm acronym, I wondered again.  My guess is they are doing what they believe is the best thing to get the public to understand what California faces, by minimizing it.

Atmospheric Rivers are a phenomenon I’ve only recently studied.  Just when I thought it was safe to go out again, I see Jim Hansen is circulating a paper discussing what happens when the Greenland and Antarctic ice sheets start to disintegrate.  Its an appropriate topic for him, because as the idea of limiting global warming to 2 C recedes into our collective rear view mirror as unattainable, its time for types like him to start considering what we now face.

His calculation shows that as the ice sheets disintegrate and slide into the sea the armadas of icebergs will absorb enormous amounts of energy causing regional and even a bit of global cooling.  The declining increasing differential between the tropics and poles will drive stronger global winds.  The stronger winds will alter the model projection of how powerful AR events can become, no doubt increasing their size.

Pop quiz:  what’s bigger than “bigger than any of the historic megastorms”?  A gigastorm?

Oh, and fantastic rates of sea level rise come along with ice sheet disintegration – there were times recorded in the paleo data where sea level rose 15 feet or more per century for several centuries.

“Nobody cares about fifty years from now“.    – Larry King, reported by Jim Hansen

The AR modellers found that the effect of increased water vapor in the atmosphere is partially offset because of the declining temperature differential between the poles and tropics, i.e. because the poles are expected to continue to warm more rapidly than the tropics as global warming proceeds there is less energy difference which is what drives global winds.  They predict the net effect re ARs will be that the total AR transport of water vapor in the global atmosphere will slightly increase overall, as will the number of AR events, i.e. a few more per year in any region, but they're talking 10% more.

They are clear that given the preliminary state of this knowledge, bigger ARs than anything historic are in the cards, I'm not sure if historic means photo proof of the Central Valley as an inland sea which they have, or sedimentary evidence that a bigger event happened in the year 1600 is what they take to be "history".

The phenomenon, i.e. ARs, may have been seen first in the climate models then confirmed by observation.  The Sci-Am article mentions the discovery that models were spitting them out happened in the same year, 1998, as when a group first figured out how to observe them.