California: "Epicenter of the US CleanTech Market"

Energy policy leadership may be nearly nonexistent in Washington, D.C. due to partisan gridlock, but America’s states and cities are well on their way to a clean energy future – with California leading the charge. 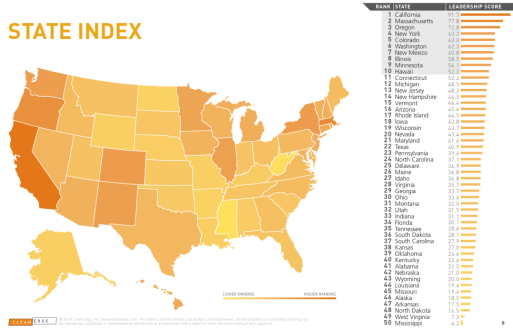 This analysis comes from Clean Edge’s 2013 US Clean Tech Leadership Index,  echoing other recent reports that rank America as the most attractive country for renewable energy investment, while underscoring the importance of defeating conservative attacks on state renewable energy standards.

As always, any talk about clean tech in America starts with California. It’s “the epicenter of the US clean-tech market,” according to Clean Edge, and scored 97.1 out of a possible 100 points. California dominated every index category, including clean electricity generation, electric/hybrid vehicle adoption, green buildings, policy outlook, solar power capacity, and venture capital.

2013 US EV/Hybrid Ranks By State chart via Clean Edge

California is unique among US states in clean energy – it’s the only one with wide-scale deployment of wind, solar, and geothermal. Those three resources generated 24.6 million megawatt-hours (MWH) of clean electricity and contributed more than 12% of the state’s overall electricity mix. California also became the first state to install more than a gigawatt (GW) of new solar PV and more than 1.5GW of new wind in the same year.

This growth has been fueled by California’s dominance of capital markets – both financial and intellectual. The state was home to 143 venture capital investment deals worth $2.2 billion in 2012 – both figures greater than the rest of the 49 states combined and equal to $58.51 dollars invested per capita. 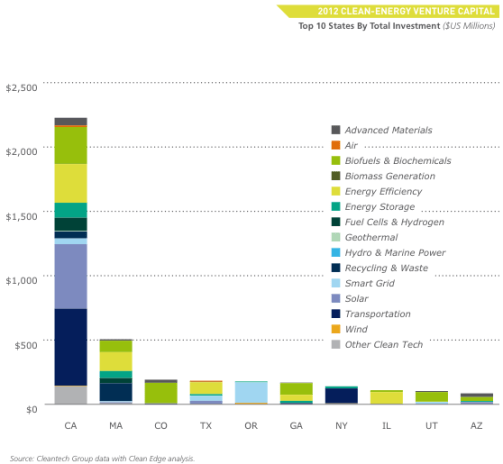 2013 US Venture Capital Investment By State graph via Clean Edge

California also maintained a smaller but still significant lead over every other state with 345 total clean energy patents granted in 2012, while holding a roughly 4-to-1 lead in total granted solar patents.

Northeast US Leads Other State Gains

But while California was the epicenter of US clean tech in 2012, significant rumblings were felt in every corner of the country. “Some states and cities now compete with entire nations for clean-tech leadership,” said Clint Wilder, Clean Edge senior editor.

Massachusetts vaulted into second place with a score of 77.8% driven by significant energy efficiency investments, pro-renewables manufacturing policy, support for early-stage technology development, intellectual property concentrated in the state’s numerous universities, and venture capital investments second only to California. In fact, Massachusetts edged out California in per-capita investment with $75.94 invested per person. 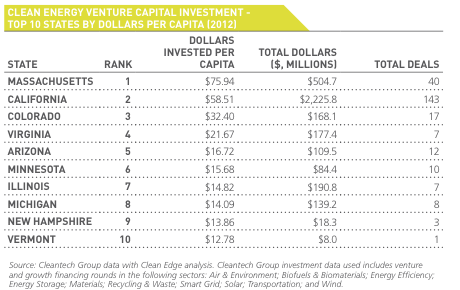 2013 US Venture Capital Investment Per Capita chart via Clean Edge

Oregon, which placed second in the first three Clean Edge Indexes, fell to third place with a score of 72.8. However, this is more an indicator of Massachusetts’ relative increase, as Oregon ranked 4th in installed wind and 10th in overall clean electricity generation while showing diverse strength in all categories, especially in the fields of electric/hybrid vehicle deployment and green building development. This overall strength has translated into economic success, with Oregon ranking highest in America for green jobs as a percentage of total employment.

New York State also surged in the rankings, jumping from sixth to fourth place with a score of 63.3 on the strength of its commitment to energy efficiency, pro-renewables policy, emissions reduction efforts, and clean technology incentives. New York led the US in economic output per kilowatt-hour consumed, led in total wind energy patents granted, and was second only to California for least electricity consumed per person in 2012. 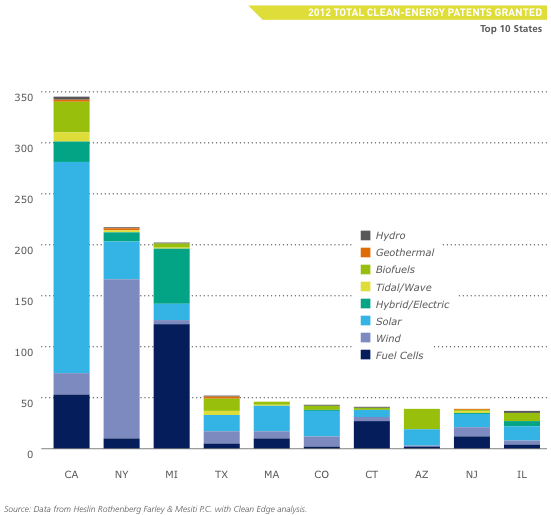 2013 US Clean Energy Patents By State graph via Clean Edge

Colorado held fast in fifth place for the fourth consecutive year, remaining the best-performing non-coastal state. The state ranked 7th overall in clean electricity generation and 3rd in per-capita venture capital investment. Colorado is a national leader in both green building programs, ranking near the top of all states in both LEED and Energy Star total projects and square footage per capita, and Clean Edge cites the National Renewable Energy Laboratory (NREL) as a clear driver for the state’s clean tech innovations.

Parsing the data even further, Clean Edge identifies the true heart of America’s clean tech economy – technology hubs in major metropolitan areas. “Leadership in clean tech at the state and metro levels is inextricably linked,” says the Index. And once again, California dominates the rankings, home to five of the top seven clean tech cities. 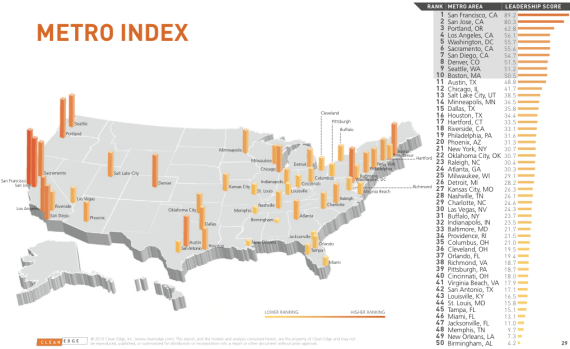 San Francisco soundly led the ranks to supplant 2012’s top clean tech city of San Jose, but the real story here is the Bay Area’s dominance. San Francisco’s 89.2 points and San Jose’s 80.3 were 20 points higher than their closest competitor, and roughly 30 points higher than any other city in the top 10 – all of whom scored between 56.1 and 50.5 points.

CleanEdge forecasts the Bay Area to lead the US for years to come, based on clear leads in clean tech investment and innovation, clean electricity and carbon management, and number of electric/hybrid vehicles on the road.

California Ranked As “Epicenter Of The US Clean Tech Market” was originally published on: CleanTechnica. To read more from CleanTechnica, join over 30,000 others and subscribe to our free RSS feed, follow us on Facebook (also free!), follow us on Twitter, or just visit our homepage (yep, free).