Building Nuclear On Time and On Budget: It Is Possible, and Essential

Large capital projects are hard.  They require a huge amount of planning, the logistics are often staggering and depend upon many contractors and suppliers, all who must perform completely in step for everything to come together as planned.  The project manager is like the conductor of a large orchestra and as good as all the musicians may be – it only takes one misstep to ruin a beautiful piece of music. Strong leadership and good people are the key.

Nuclear projects are often criticized for being delivered well over cost and schedule.  Examples abound.  Currently we have the Olkiluoto plant in Finland, the Vogtle plant in Georgia and the Flamanville plant in France all running late and over budget while Watts Bar 2, the first unit to enter service in the USA in 20 years was also recently completed well over its original budget.   On the other hand, many plants being built in China and Korea are on time and on budget and even the first new plant in a new nuclear country in a long time, Barakah in the UAE, was built on time and on budget, although there are now some delays in the first unit entering into operations.

Of course, nuclear projects are not the only large projects to suffer from overruns.  A 2017 report on North American projects by EY Canada has determined that “Canadian infrastructure megaprojects run 39% (US$2.2b) over budget and behind schedule by 12 months on average. However, Canadian megaprojects perform better than those in the US, where the average project delay is a little more than three years.”

Now, we have talked in the past about the economics of nuclear plants and one thing is clear, the largest component of the cost of energy from a nuclear plant is the capital cost representing about two thirds of the total cost of energy.  Therefore, building to budgeted cost and schedule is essential to maintain the estimated economic competitiveness of the plant that was the basis for securing project approval.  And because the capital cost is such a large component of the cost of nuclear (and solar) energy, the cost of energy is very sensitive to cost overruns.  This can be seen in the chart below from the IEA/NEA report “Projected Costs of Generating Electricity – 2015 edition”. 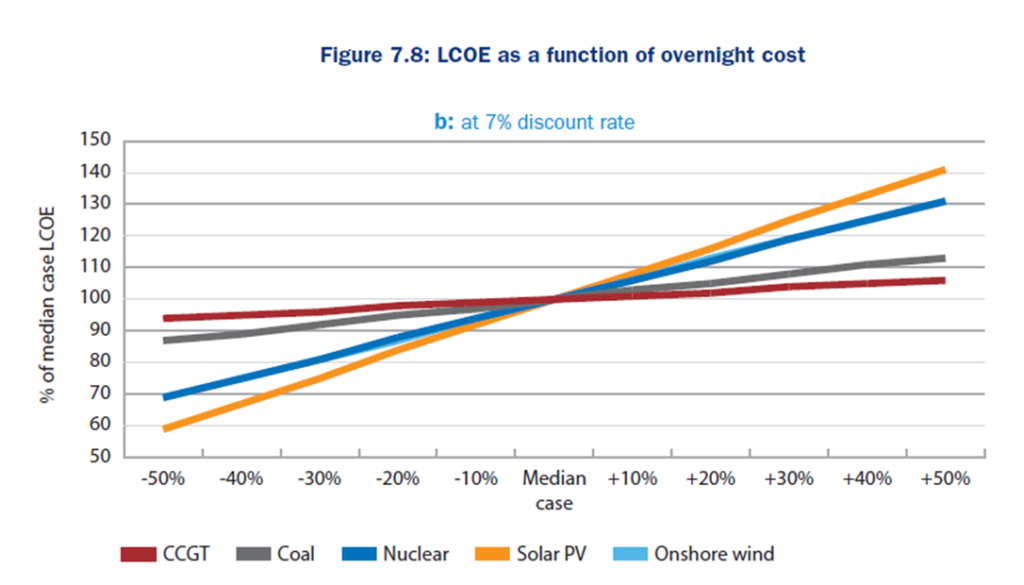 There are many reasons why large projects go over budget and are late.  What is in vogue these days is to put the blame primarily on the fact that these poorly performing projects are First of a Kind (FOAK) projects, meaning they are building a new design for the first time.  Other factors include the significant regulatory burden placed on the nuclear industry and the challenges being experienced by a supply chain that has not delivered to a nuclear project in these jurisdictions in a long time and needs to re-establish its capability.

Clearly the strength in the Chinese and Korean programs are from both standardization and the relatively large number of units being built, which provides for more certainty and a well-developed supply chain.  And while it is true that doing things for the first time makes a project more difficult, the fact that a project is FOAK may be an explanation but is not a good excuse for the magnitude of overruns we are seeing.  If we want to be credible, we must deliver on our commitments.  After all, these are large multi-billion dollar projects.  While there are many excellent reasons to support nuclear power, who will approve future projects if the outcome is not predictable?

We recently wrote about using fixed price contracts to mitigate some of these risks and why this has resulted in a false sense of security.  Today, lets look at some of the things we can do to assess and mitigate the risk of overruns on nuclear projects, primarily those with larger FOAK elements.

Why do we say FOAK elements?  Those that know us well, know our complete preoccupation with standardization as a means to controlling project risk.  But as much as we would like to say that after the first project the next units will be standard, it is always a matter of degree.  For example, the highest level of standardization is when there are multiple units being built at the same site.  This allows for everything learned on the first unit to be immediately implemented on the subsequent units by the very same people that have just completed the previous project.

Then there is the case where the same design is being implemented on a different site in the same jurisdiction so that most (but not all) of the supply chain and management can also be the same.  But for other projects, we know that even when repeating a design, there are many things that can be new or different.  Often there are different suppliers and contractors as projects are built in different jurisdictions; and there can also be changes in the financial and contractual structure of the project, that can impact project implementation.  And of course, there are always design changes as designs are updated to meet new codes, address site specific issues and meet local regulatory requirements.

As we stated above, large nuclear projects are hard.  But hard does not mean impossible.  Hard takes the right approach to deliver success.  So, what are we to do to deliver projects to time and budget?

We need to all learn from each other.  We do not implement enough projects in most jurisdictions to benefit from the series effect on our own.  Here are some of the lessons learned gathered from those that have succeeded:

As we have said many times before, nuclear plants are extremely reliable, efficient, low carbon and cost-effective producers of electricity.  As they are capital intensive, their economics depend upon successful project implementation.  Project delays and overruns have large impacts on the project economics and negatively impact the credibility of the industry.  After all, just like a great symphony, there is something beautiful when a large complex project comes together as planned – and there is nothing more important for the long-term health of the nuclear industry than building projects to cost and schedule.

Great piece, Milt, couldn’t agree more with your conclusions. One point I would add is that the regulator and Government also have a role to play in ensuring cost effective, on-time delivery.

Contrary to the post: Barakah in the UAE, was not built on time.
It’s even now not operational yet.

Considering the closed accounting it’s not clear whether it’s on budget, but usually delays of a year or more*) imply also significant exceeding the budget.

Milton, often ignored in the discussion of nuclear plant financing is the importance of public involvement.

An investor who seeks prompt ROI would be out of his/her mind to build a nuclear plant. “First-of-a-kind” or not, every multi-$billion construction project faces opposition, delays and cost overruns – it comes with the territory. So instead of comparing a nuclear power plant to a wind or solar farm, which can be built piece-by-piece while incurring little risk, let’s compare it to something…comparable.

When planning began in 1916 for the Golden Gate bridge, its estimated cost was $100 million ($2.2 billion in 2009 dollars). It, too, was a FOAK project which faced opposition from competitors: Southern Pacific Railroad sued to stop the project, but yielded after citizens boycotted its ferry service; unions demanded guarantees local workers would be used to build it; Humboldt County opposed the project for the increase in traffic it would generate.

In 1923 California’s Assembly passed The Golden Gate Bridge and Highway District Act, creating a special “district” of California communities which would design, build, and finance the project. After the district failed to raise financing, counties stepped in and established a $30 million bond fund. When the Great Depression hit and counties couldn’t sell their bonds, only then did private investment step in, with Bank of America buying all county bonds to help the local economy.

What Bank of America recognized was a public commitment to build an infrastructure asset which would pay rewards not for 5 years, not for 25 years, but indefinitely. The Golden Gate Bridge opened May 27, 1937, 20 years from the date it was first conceived. Sound familiar?