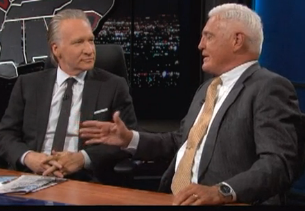 That’s what Bob Lutz, former senior executive for General Motors, says he believes.  Lutz is said to have been the driving force that spurred GM to create the Volt.

Bill Maher set up a panel featuring Lutz on his latest show and kicked off the discussion by asking Lutz to comment on the fact he made this statement about global warming in 2004.

Lutz responded emphatically:  “And my attitude has been reinforced since then”.

Bob’s a very knowledgeable guy.  He explained: “Listen.  Abnormal weather patterns around the world have been a fact of life”.  Why when he was a kid in 1941 they had a hurricane in New York.  Lutz doesn’t understand that what scientists say about abnormal weather is that the amount of it is increasing.

But Lutz doesn’t have to worry about details like that.  What he knows is that the scientists don’t know what they are talking about.

Maher:  “What about the fact that it is the overwhelming consensus of all the climate scientists?”

Although it wasn’t always clear precisely what Lutz was saying everyone got the gist.  Everyone on the panel almost seemed to be having fun.  It is acceptable to deny climate change in the US today.  This won’t always be the case if the scientists are right.   David Keith, a climate scientist quoted by Mark Gunther in his new ebook says:

“It’s unbelieveable, the idea that people think it’s acceptable in an advanced technological society for oil company executives and congressmen to opine about science as if, basically, facts don’t matter”.

Lutz was emphatic that he believed climate scientists don’t have a clue:  “Name me one prediction of the International Panel on Climate Change that made predictions in ’91, ’96, 2001… ”  Maher interrupted:  “They’re worse than predicted”.    Lutz scoffed:  “The oceans were gonna get hot”.   Maher:  “They are”.

After the Holocaust it became unacceptable to publicly express certain lies in Germany about Jews.  Unfortunately that only happened after millions of them were killed.  People realized where the Big Lies of Goebbels had taken them.

There is only one planet.

There was a scientist on the panel with Maher and Lutz.  Neil deGrasse Tyson hosts the PBS television show scienceNOW.  He said to Lutz:  “Are you prepared to put your money where your ideas are?”  Lutz, enthusiastically, said:  “Absolutely”.  Tyson came up with a scheme for a bet that couldn’t be settled for 50 years.  Lutz, who is 80 years old, claimed he was prepared to take him up on it.

I would have bet him on something that could be settled now.  As the discussion ended the topic of betting came up again.

Lutz:  “I have.  I bought a house in the Keys.  Its supposed to be under water – three years ago.’

But when facts don’t matter, how do you settle bets?

See the entire Maher Lutz Tyson below..  It’s Bill Maher, so a strong language advisory is always in effect.

i think we know how GM got into so much trouble now. Having a senior executive who is so aggressively and willfully ignorant of discoverable, objective fact (and here i don’t mean anthropogenic climate change – while that’s nearly certainly true it’s not yet objective fact) but things like the warming of the oceans or the broad support (though certainly not universal consensus – that’s not only uncommon in science, it’s actually sort of antithetical to the scientific process) among accredited climate scientists for the theory that the climate has been and continues to be disrupted by human activities in ways that will radically transform the ecosystem. The irony appears to be completely lost on neanderthals like Lutz that it is the deniers, not the scientists, who claim absolute certainty about something of which we cannot be certain until it is far too late to do anything about it. Where is the concern for prudent risk management that any responsible senior corporate manager should have been taught from his/her first day on the job? Clearly that basic management skill was missing at GM, with inevitable consequences – for GM and for the climate dialogue.