Blog: Is achieving a net zero emission target and having the risk of carbon leakage a “paradox”?

image credit: Special thanks to Dr. David Comerford, Dr. Robert Charnock, and Dr. Ranit Chatterjee, for all the support & guidance.

Mr. Saikat Das is currently pursuing masters in Economics and Policy of Energy & Climate Change at a University in Glasgow, Scotland (UK). He thrives in high-pressure and fast-paced...

Globalization has resulted in a tremendous increase in worldwide trade during the past century. Consequently, the proportion of global carbon emissions attributable to the manufacturing of traded goods has increased and currently accounts for a quarter of all emissions. Carbon leakage is a baffling phrase used by some to describe offshoring emissions that are not only driven by climate policy disagreements but also by broader international investment and trade factors. 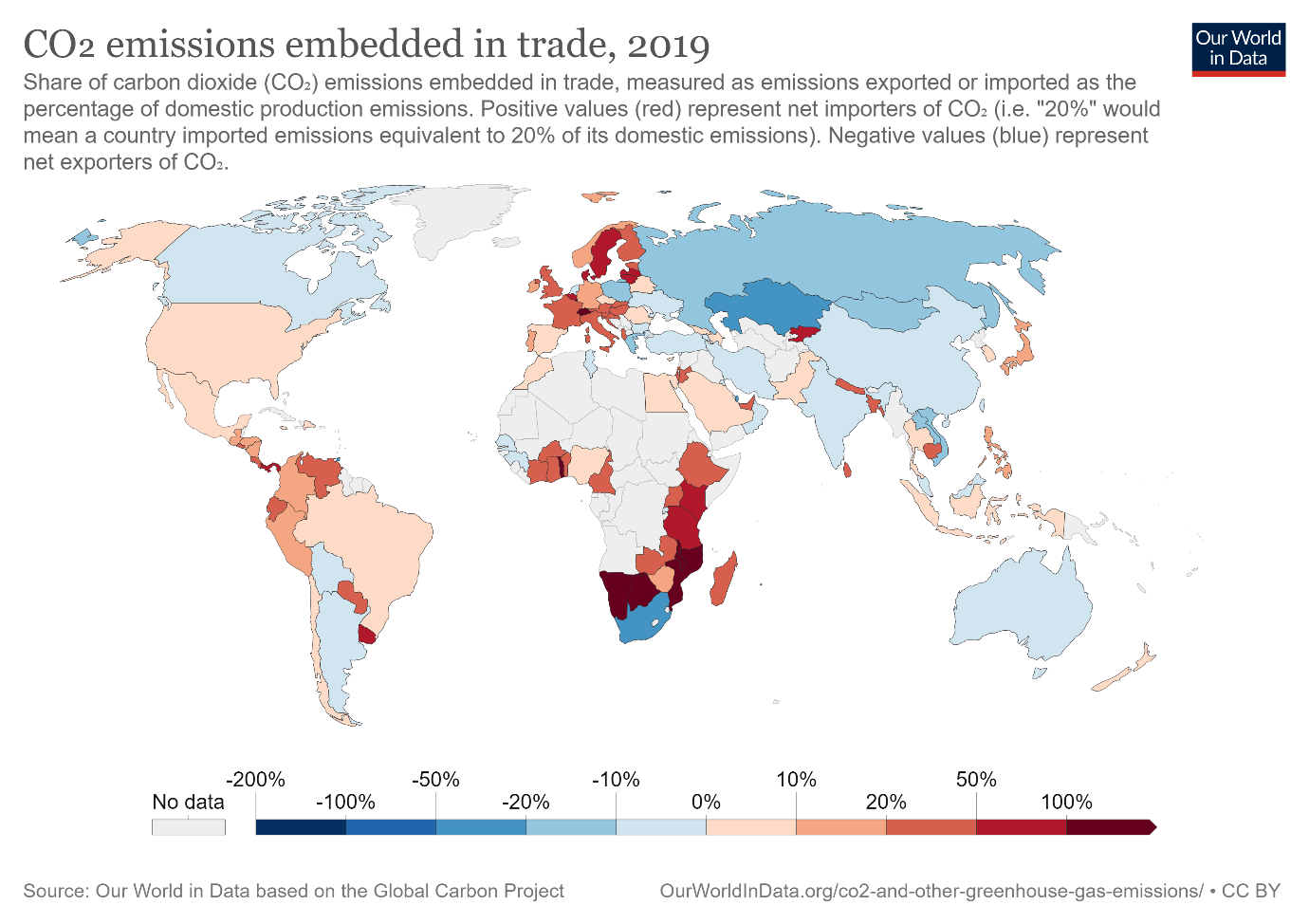 Alternatively, producers in a jurisdiction with high ambitions may choose that they must relocate some or all of their operations to new areas. As a result, carbon leakage lowers the effect of carbon reduction efforts in that area with ambitious goals. If the consequence was greater production in a place with lower emission requirements than happened previously in the strong intent control, it may result in an overall rise in emissions in a worst-case scenario. It may also result in employment losses and an absence of competitiveness in certain industries in high-ambition regions. Lastly, carbon leakage offers the reason for the still-controversial border carbon adjustment techniques.

Due to the EU's Emissions Trading System (ETS), these claims can now be examined. Industries do not appear to have departed the EU, despite receiving substantial subsidies. In contrast, global emissions have climbed dramatically, but few would assert that this is because of the EU ETS. The emissions trading system (ETS) allows emitters to sell emission units to satisfy their emission targets. Based on the relative prices of these choices, regulated businesses can either adopt domestic abatement efforts or obtain emission units on the carbon market to meet their emission reduction targets at the lowest cost.

Focusing on production disregards the reality that many nations import more carbon-intensive goods than they export. Then, Fig. 1, displays the evolution of UK, US, and EU production-related carbon emissions through time. This indicates a drop in all three situations, with the UK's fall being the most dramatic. 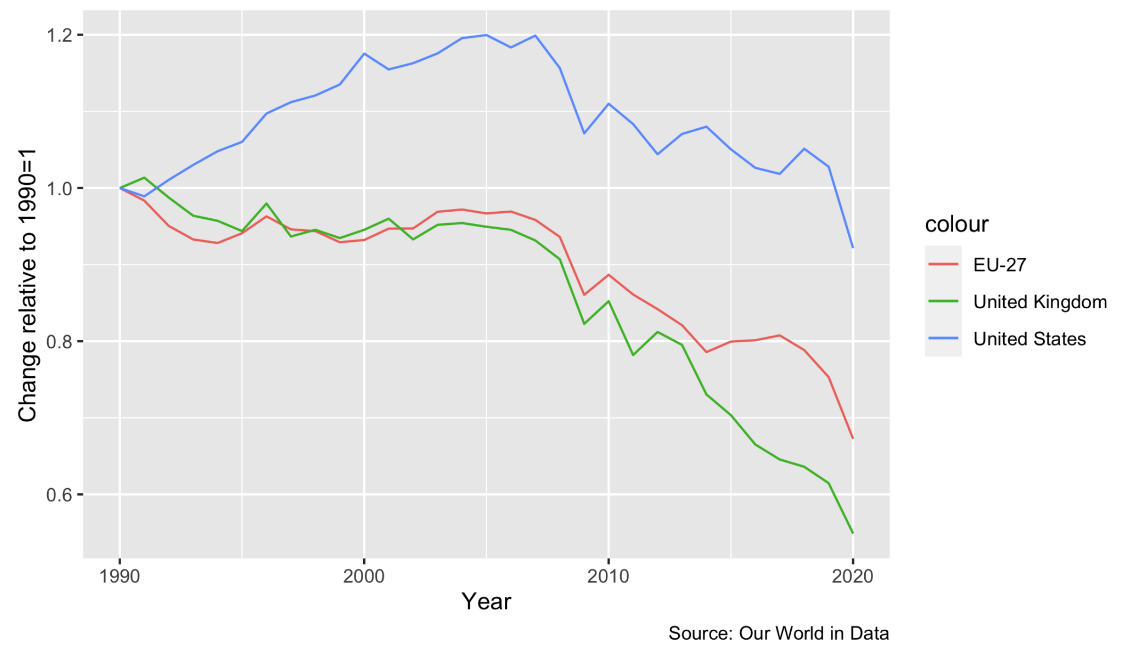 Figure 1 CO2 Production based emission (base as 1990) Source: Our world in data 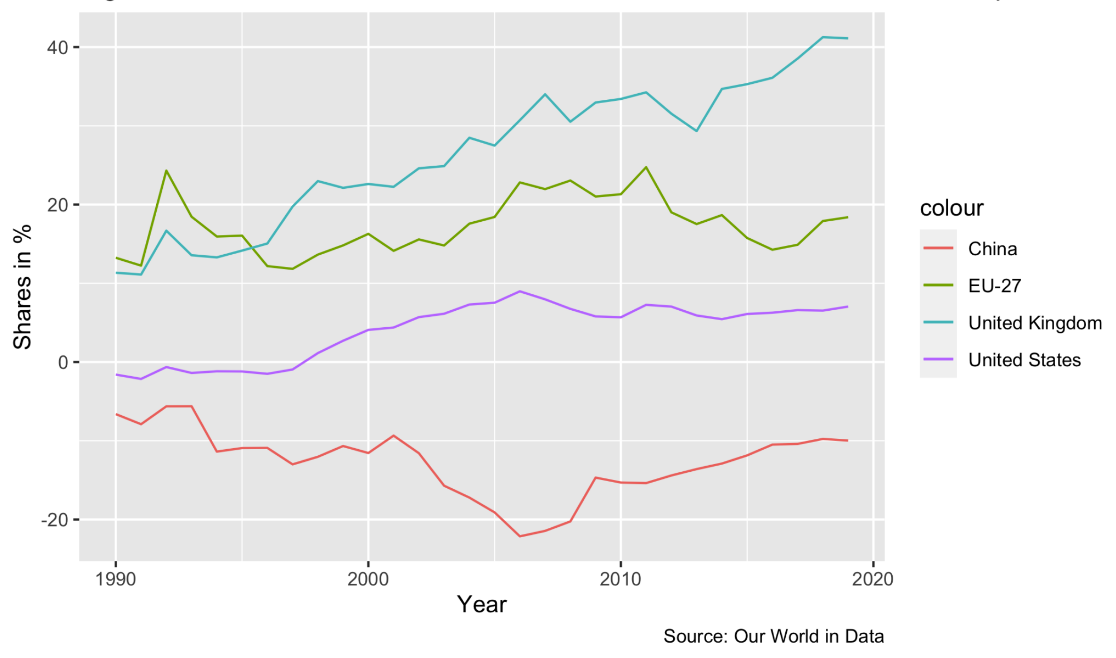 Although a few empirical studies have discovered considerable carbon leakages, policymakers are concerned (e.g., leakage rates between 5 to 40 %) that it will become a reality unless carbon prices are raised in highly ambitious nations.

Rapid changes in international commerce demonstrate that a large portion of the increase in emissions in nations without carbon pricing is a result of nations with carbon pricing increasing their consumption. This contradiction can be reconciled by considering carbon leakage from a broader perspective.

International competitiveness is a firm's or sector's ability to earn and retain a lucrative market share. Carbon policy (as shown in Fig. 3) can affect competitiveness, although not all competitiveness implications (e.g. labor costs) qualify as carbon leakage. Competitiveness consequences from carbon laws may place enterprises at a deficit with foreign counterparts (e.g., if they can't abate and/or transfer through costs). The effects of carbon leakage can be classified as either environmental or socioeconomic. Environmental leakage is significant because it can diminish or even reverse the environmental effects that we want to achieve by imposing a carbon price. 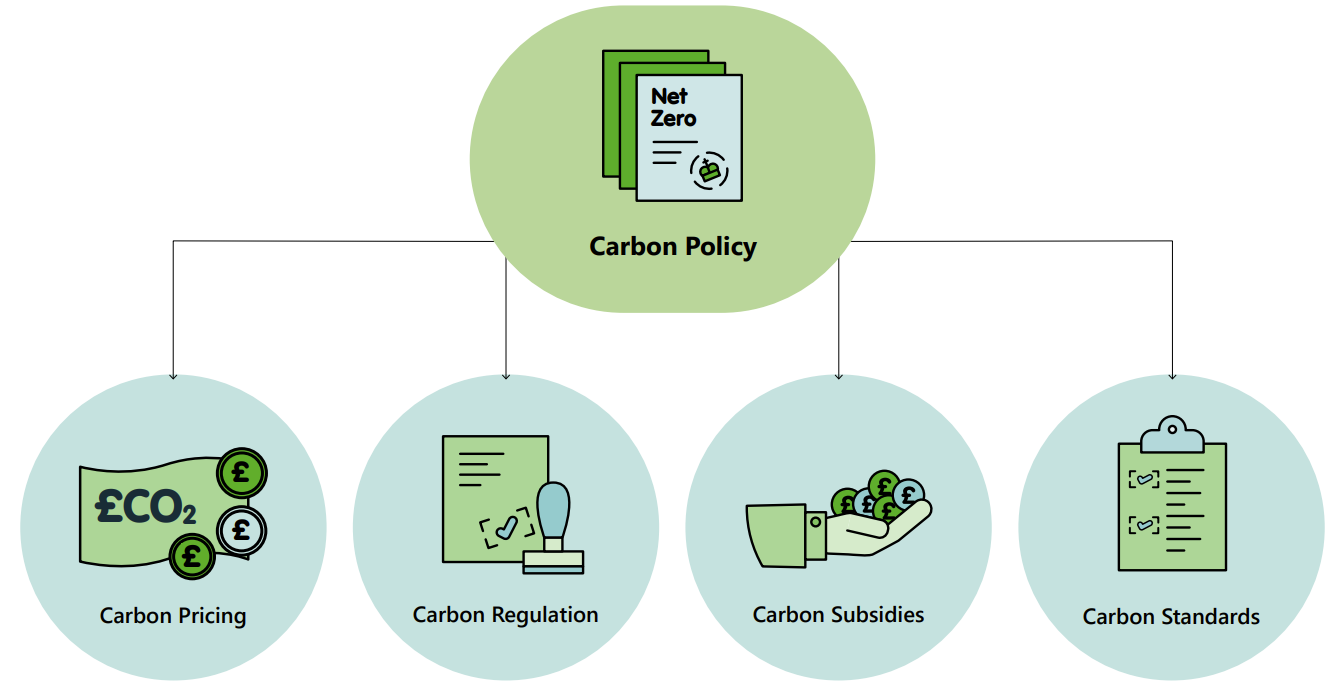 The magnitude and pace of the net zero goals necessitate a reorientation of the conventional objectives of international trade of energy-intensive market design to guarantee effective emission calculation in production & consumption, unilateral low-carbon objective and policy, and optimal funding/investment.

The world will achieve a net zero target when the produced/emitted carbon emission would be counterbalanced with the same estimate of carbon offsetting or removal. On the contrary, through global trade among non-unilateral policy-holding countries, carbon leakage could be risked over time, posing obstructions to the emission reduction vision. Is not achieving a NetZero target and having a carbon leakage problem, a “paradox”?

To decarbonize economies, it is important to increase GHG emission reductions and reduce the cost of mitigation. Given the magnitude and urgency of the climate crisis, a comprehensive spectrum of carbon pricing strategies will be necessary, together with additional supplementary policies and laws.

-Due to the close relationship between CO2 emissions and the use of fossil fuels, countries that want to pursue a more restrictive policy about their emissions are concerned that their energy-intensive industries will be harmed by international competition from industries in countries with a laxer stance on climate change.

The carbon policy mechanism (CPM) must incentivize the reduction or elimination of greenhouse gas emissions. Carbon policies may be created for energy-intensive, trade-exposed sectors industries to prevent carbon leakage and competitiveness implications by:

a) Mechanisms are typically put in place in the case of carbon pricing to directly mitigate a particular carbon price resulting from a tax or emissions trading scheme,

b) Dual form of carbon standards; (i) Establishing benchmarks for free allocation of permits); and ii) Standards imposed on producers and buyers that establish minimum obligations, such as those connected to carbon. And,

c) minimum responsibilities put on producers and purchasers, such as those related to carbon emissions.

Carbon policy should ideally not only consider its short-term effects on competitiveness in its design and execution but also be durable and give certainty to minimize long-term leakage and stimulate investment. This provides a policy approach with distinct phasing schedules that are matched with carbon budgets.

Rebate carbon permits to domestic producers under an Emissions Trading Scheme so that they remain competitive with overseas manufacturers, not subjected to ETS. The EU ETS uses 'cap-and-trade', which caps the number of specific GHGs that covered yearly released entities.

Since 2013, power generators have auctioned CO2 allowances. However, manufacturing sectors that have been declared concerned about carbon leakage obtain their emission allotment for free. Free allocations to the industry are capped. 164 industries, representing 95% of industrial pollution, are in danger of leakage and therefore obtain free pollution licenses.

In July 2021, the European Commission will establish the Carbon Border Adjustment Mechanism (CBAM). The plan mandates that importers obtain carbon credits equal to the carbon price that would have been imposed on the commodities under EU carbon pricing regulations. Moreover, under the latest proposal for a modified ETS by the Commission, the free allowances of emissions permits in tradable permit systems would be eliminated progressively beginning in 2026.

Policymakers might be required to, for instance, subsidize vulnerable businesses and implement border tax adjustments to equalize the carbon price.

Carbon leakage therefore can be mitigated if carbon-intensive businesses of trading partners are likewise subject to climate policies, that include sectoral climate agreements, focused technology transfer, and multilateral and bilaterally funds. On the path to net-zero, both familiar and unique obstacles will be encountered, with carbon leakage reduction, international competitiveness, decarbonization capacity, and its implementation among the leading influencers.