Many of the main energy trends of 2010 were predictable at the year’s start, including the growing reliance of renewable energy on government assistance in the aftermath of the financial crisis, the debate over US greenhouse gas legislation, the emphasis on green jobs and competition with China, the delayed arrival of cellulosic biofuels, and the anticipation surrounding the product launches of the first mass-market electric vehicles. As interesting as all this was, the year in energy was dominated by two transformative events: the Deepwater Horizon accident and the multi-million barrel leak that ensued, and the less spectacular but no less profound awakening to the possibilities of the shale gas revolution.

The Deepwater Horizon disaster has been the subject of such extensive coverage and investigation that there’s little I can add concerning the facts, other than to note that we have not heard the last word on just how much oil actually leaked into the Gulf of Mexico. The consequences of our response to the spill will be with us for a long time, both in terms of reduced offshore drilling activity and the decline in US oil output that must inevitably follow. The impact will reach far beyond the tens of thousands of workers whose livelihoods are directly or indirectly linked to the US offshore industry. Early in 2010 it looked like the industry would finally be offered access to areas that had been off-limits for decades, and by year-end not only has drilling in the central and western Gulf come to a near standstill, but the prospect of leases in the eastern Gulf and the mid-Atlantic coast has been foreclosed, perhaps permanently.

The psychological impact of the event could extend even farther than its physical and economic fallout. Whatever misgivings many people had about offshore drilling before the accident, the industry had built up trust through an impressive string of technical achievements–pushing the boundaries of resource accessibility from depths of a few hundred feet into nearly two miles of inhospitable ocean–and a solid reputation for safety. In the space of one day and the following weeks, that trust was shattered. Coming on the heels of a financial crisis that destroyed the trust of millions of Americans in the nation’s largest financial institutions and markets likely amplified the effect. As fickle as we Americans sometimes seem, I wouldn’t bet that this trust can be restored quickly, or to the same degree.

The shale gas revolution is a completely different kind of story, though it, too, has arguably been tainted by Deepwater Horizon. As it unlocks a resource that has converted the US natural gas supply outlook from one of scarcity and growing import dependence to expected abundance for decades, the gas industry can’t assume it will receive the benefit of the doubt concerning the environmental impact of the drilling techniques that have made this turnabout possible. 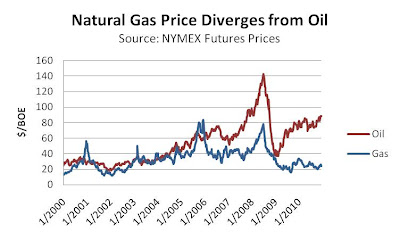 Perhaps one reason the impact of cheap natural gas hasn’t sunk in yet is that the main market price for gas, the futures price at the Henry Hub in Louisiana, doesn’t have much relevance for the average consumer. Residential gas customers don’t buy their gas in the million-BTU (MMBTU) lots in which the futures contract is denominated; we buy gas in therms–one tenth of an MMBTU–and by the time we see it on our bills all sorts of handling and distribution fees and mark-ups have been added on. But when you compare the price of traded gas in barrels of oil equivalent (BOE) to the price of West Texas Intermediate crude, the remarkable divergence of the last two years becomes obvious, as shown in the chart above. Between 2000 and 2006 gas and oil tracked each other closely, allowing for the greater seasonal volatility of the former. There were even periods when a barrel-equivalent of gas was worth more than a barrel of oil. Yet while oil and gas prices fell precipitously when the recession and financial crisis burst the various asset bubbles, they have diverged sharply since then, with oil advancing back up to today’s $91/bbl and gas settling in to the $20-25/bbl range in which we were accustomed to see oil prices a decade ago. Adjust that for inflation and you’re looking at an average natural gas price for 2010 equivalent to $20/bbl in 2000.

That might help explain why the developers of renewable electricity sources such as wind have struggled so much this year, despite receiving $3.9 billion in direct cash grants from the US Treasury. They’re not competing with $90 oil; the US generated less than 1% of its electricity from petroleum this year, through September. Instead, they’re competing with gas at an effective price of $25/bbl or less. But if this is a new obstacle for some renewables, it surely represents a huge opportunity for the country as a whole, as we struggle to find our way out of the fiscal and competitive pit we’ve dug. Cheap energy has always been a key to growth, and right now, gas is the only energy source offering that without requiring an enormous up-front investment. It’s no panacea, and it can’t take on every burden without being spread so thin that its price advantage would disappear. But I’d much rather be looking at the possibilities this presents than at the constraints that high-priced oil and natural gas imposed only a couple of years ago.

That’s probably as good a note as any on which to end the year. New postings will resume the week of January 3, 2011. In the meantime, I wish my readers a happy holiday season.