Biden's Undeclared War Against US Sustainability and the Environment

It is often said for many situations in life that "you can't make this stuff up" or "truth is stranger than fiction." Is it possible that the same guy, Mr. Biden, who did victory laps at COP26 and apologized to the World for the US' "inability" to reign-in emissions is in reality a venal threat to the environment and sustainability? Unwittingly, Biden and his Green New Deal collaborators who purport that they want to "save the planet" are curiously advocating a course of action that will do quite the opposite. How these "leaders" technologically and precipitously devolved to this point is even more alarming and disturbing.

The entire Green Junta of the Biden Administration is fatally infected with a terminal and incurable case of virtue signaling. Thus, the science, engineering, and economic skills that are vitally crucial for deploying renewables take a backseat to the virtue du jour as dictated by the Green Junta. A preview of Biden's renewable energy vision for the US is arguably Costa Rica, the United Nation's dubious and tainted poster child for renewable technology.

And what is REALLY alarming is that the Costa Rica renewable energy situation actually exists. Even worse, it is inexplicably lionized by the United Nations.

If the Administration follows this model and blithely ignores sustainable land management dictums, over 26% of US land will be blanketed with renewable energy technology. 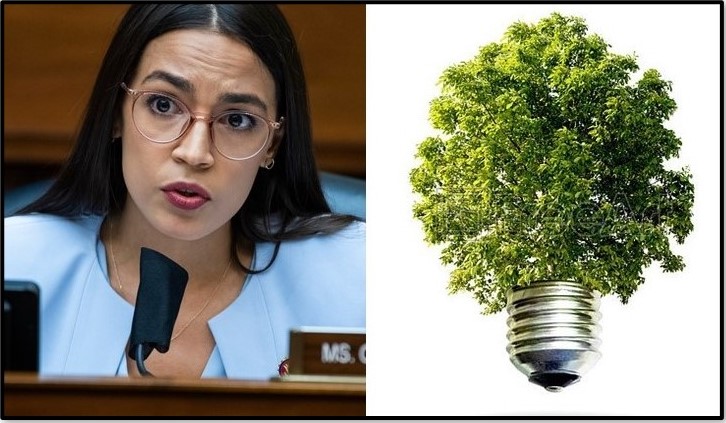 Reality Meets The "Thinking" of the Green New Deal Players

The genesis of the Green New Deal arguably resides with Representative Alexandria Ocasio Cortez (AOC), a member of the US Congress from New York whose real day job is High Priestess of Virtue Signaling.  Ms. Ocasio-Cortez is widely regarded as the architect of House Resolution 109, December 2019 which is the verbiage associated with the "Green New Deal." An analysis of this resolution shows this initiative to be a shallow, ill-conceived enterprise that egregiously fails to adhere to fundamental sustainability maxims.

This will result in wasting trillions of taxpayers' funds while compromising and hindering the intended effort to stimulate the economy and mitigate anthropogenic climate change. Even worse, elements of the "Deal" are fatally crippled with unsustainable features.

The failures of the resolution primarily reside in the fact that it ignores two pivotal and interlinked components of sustainable systems.

These are resource use efficiency and sustainable land use.

Recent data indicate that the energy footprint of the US is about 58% higher than the that of the EU (281 MMBTU/cap/year and 178 MMBTU /cap/year, respectively). So, when the Biden White House pontificates that all of the Nation's energy will be renewable (i.e., solar or wind), one must assume a target energy footprint as a design criteria. With an energy footprint number and the country's population (currently around 335 million), the Nation's projected energy requirements can be estimated.

Focusing on energy efficiency and footprint minimization is a vital first step. Lower energy footprints mean that the country can produce lower amounts of energy while mitigating land utilization.

Sustainable land use is the veritable "elephant in the room" for self-labelled green energy advocates and "experts." This is stated because some renewables are notoriously poor when it comes to the metrics of sustainable land management.

That's right. Land is a resource. And like any resource, its sustainable utilization is not up for debate.

What is particularly appalling is that the Green Junta myopically focuses on emissions without comprehending the overall sustainability calculus. Their apparent rationale is that carbon dioxide emissions govern EVERY decision regarding sustainably engineered systems.

However, the more land that an energy production system requires means that less land is available for natural processes that control and or transform atmospheric carbon dioxide using photosynthesis.

Nowhere is this horrendous modus operandi more blatantly displayed in real-life than it is in the eco-tragedy that is unfolding in Costa Rica. Some of the bitter consequences perpetrated by this incomparable insanity are discussed in more detail in a recent NASA report.

Implications of Biden's Agenda for US Sustainability

It is feasible to be able to quantify and depict the potential impact of Biden's Agenda on US sustainability. One can assume that solar and wind are the renewables that will replace fossil fuel systems. Three scenarios are examined:

A chart is shown below which graphically depicts the scenarios described above. 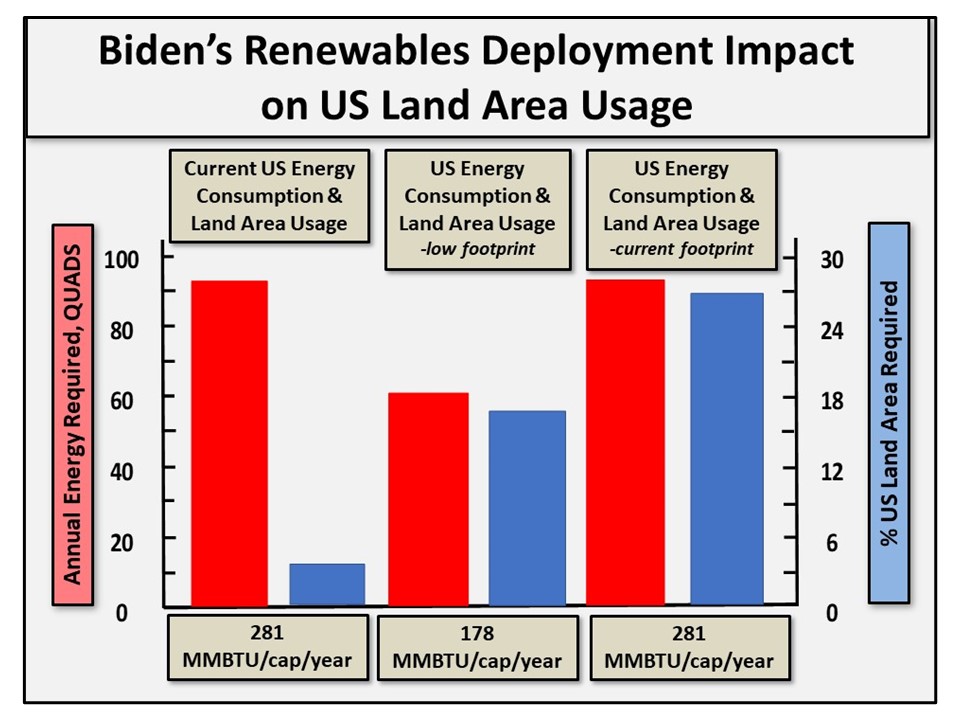 Here are the key takeaways of this analysis:

The Green New Deal as proposed would impose atrocious increases of US land area required for energy which is currently around 4% of available land area to potentially as high as 26%.

Despite the articulated concerns, the Green New Deal supporters are correct that action is needed. That needed action is as crucial, or even more so, to preserve the Nation's economic stability as well as its environmental integrity.

There is no question that renewables need to play a pivotal role for environmental and sustainability considerations. However, it is important comprehend that true sustainability is also about the economy. "Renewable" technologies and how they are applied must be done so sustainably with adherence to BOTH environmental and economic principles. Just because a given technology has low carbon dioxide emissions does not mean it gets a "free pass" with other sustainability criteria. The Green New Deal initiative as envisioned by the Biden Administration would be a colossal setback for sustainability and environmental initiatives. That being stated, Deal originators should be mindful of the comments provided herein and contemplate initiatives that have authentic sustainability metrics and more palpable economic characteristics.

I'm not ready to judge intent. But is anybody thinking how to address food and water security for a projected global population of 9 billion people in 2050?? My guess is both India and China, with 10 times the population of the US and a long history of said insecurity, are thinking about it.

Second question is, How do we enhance soil productivity and water retention without carbon from somewhere?? Again, my guess is the now highly competent "third world" scientific community has a plan to get rich with relatively abundant CO2. They might even get us to pay them to enrich their farmland.

Great topic. Maybe the solution is for people to use less natural resources - i.e., conserve natural resources. Do we all need a new car every year? Or new furniture, carpet, etc..? I know this is an unpopular and boring method but i tell it to my wife every day when she leaves the light on in the back room LOL. Hours and hours later and a few bucks more on my energy bill add up. But i'm ol skool and think a hamburger and fries should be $3.50 :-)

The land use numbers in this article are wrong by two orders of magnitude.

Wind turbines have a capacity of around 4 MW per km2 allowing spacing to avoid interference, and generate about 14,000 MWh per year per km2 (40% capacity factor). Land alienated around the towers is tiny - about 1% of the land spanned by the windfarm.

Solar farms have a capacity of 50-100 MW per km2, and generate about 140,000 MWh/km2. About one third of the solar PV is on rooftops and alienates no land. Much of the rest is in a productive combination with agriculture (a send cash crop for farmers).

Sources were US DOE and Strata since.  Strata reference was provided.

Your numbers are plain wrong. I think there must have been some large misinterpretation of the DoE figures.

Do a simplified analysis just assuming 100% ground mounted solar for US electricity, then double them to account for electrification of everything. You will quickly see that my numbers above are about right.

Read the Strata report. Maybe advise the DOE when you get a chance.

You are saying that both DOE and Strata are off by a factor of 100 which is "two orders of magnitude." I assume you are using Base 10 math.  Correct? So, in your perception, the actual land use for large scale, non-rooftop, etc. solar scenarios is 1% of what these sources (and the DOE is a big supporter of solar) are reporting.

Ok, here is an excerpt from the Strata report:

Solar land use for energy generation per Strata is put at 8.1 acres per MW which is 0.123 MW per acre. OK? There are 247 acres in a km2. The math using Strata's data (0.123 x 247) equates to about 31 MW/km2. You provided "50-100 MW per km2" as representative numbers which arguably teeter on being overly optimistic. Nevertheless, the discrepancy is nowhere near the "two orders of magnitude" that you stated.

Current US electricity demand is about 4000 TWh/year which therefore requires 47,000km2 if all power comes from PV (zero wind, hydro, nuclear, geo etc). This is 0.5% of the USA land area. One third will be on rooftops. Another third of electricity production will actually not be solar. So that reduces the required land area to below 0.17%. Accounting for electrification of transport, heating and industry requires doubling or even tripling of electricity demand (depending on the demands of the chemical industry). It is clear that total land use will be below 0.4%.

This is much smaller than numbers in your graph.