The Battle Plan: Key Lessons from the Second World War for the Climate Mobilization (Part 1) 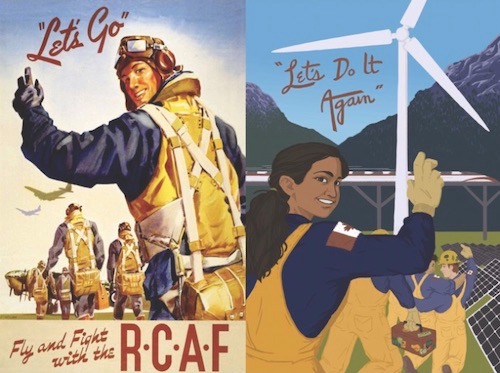 This is the first of two excerpts from Seth Klein’s A Good War: Mobilizing Canada for the Climate Emergency, published in early September and available here. The book includes Klein’s “battle plan”, a set of key lessons for the climate mobilization from the Second World War.

“To execute a successful battle, we need a plan—a roadmap to guide us through the stages of climate mobilization,” Klein writes. “From my study of Canada’s Second World War experience, and in particular how we successfully mobilized on the home front, the following key strategic lessons emerge.”

Adopt an emergency wartime mindset, prepared to do what it takes to win. Something powerful happens when we approach a crisis by naming the emergency and the need for wartime-scale action. It creates a new sense of shared purpose, a renewed unity across Canada’s confederation, and liberates a level of political action that seemed previously impossible. Economic ideas deemed off-limits become newly considered, and we open ourselves up to fresh ways of thinking. We see the attacks on our soil for what they are. And we become collectively willing to see our governments adopt mandatory policies, replacing voluntary measures that merely incentivize and encourage change with clear timelines and regulatory fiat in order to drive change and meet ambitious targets.

Rally the public at every turn. Many assume that at the outbreak of the Second World War everyone understood the threat and was ready to rally to [Prime Minister William Lyon] Mackenzie King’s call. But that was not so. It took leadership to mobilize the public. In frequency and tone, in words and in action, the climate mobilization needs to look and sound and feel like an emergency.

If our governments are not behaving as if the situation is an emergency, then they are effectively communicating to the public that it is not. As occurred in the war, our governments need to develop and execute multifaceted advertising programs that boost the level of public “climate literacy” and outline and explain their policy responses. The news media and educational institutions need to reimagine their approach to this crisis, and we must demand that they do so. We need to marshal the cultural and entertainment sectors, which requires major public funding for arts and culture initiatives that seek to rally the public. And we need to better include the public in decision-making as we refine our climate policies, through the use of citizen assemblies and other means of democratic engagement.

Inequality is toxic to social solidarity and mass mobilization. A successful mobilization requires that people make common cause across class, race and gender, and that the public have confidence that sacrifices are being made by the rich as well as middle- and modest-income people. During the First World War, inequality undermined such efforts. Consequently, at the outset of the Second World War, the government took bold steps to lessen inequality and limit excess profits. Such measures are needed again today.

Embrace economic planning and create the economic institutions needed to get the job done. During the Second World War, starting from a base of virtually nothing, the Canadian economy and its labour force pumped out planes, military vehicles, ships, and armaments at a speed and scale that is simply mind-blowing. Remarkably, the Canadian government (under the leadership of C.D. Howe) established 28 Crown corporations to meet the supply and munitions requirements of the war effort. That is just one example of what the government was prepared to do to transform the Canadian economy to meet wartime production needs. The private sector had a key role to play in that economic transition, but vitally, it was not allowed to determine the allocation of scarce resources. In a time of emergency, we don’t leave such decisions to the market. Throughout most of the war years, the production and sale of the private automobile, in both Canada and the U.S., was effectively banned; instead those auto factories were operating full tilt to churn out wartime vehicles.

Howe’s department undertook detailed economic planning to ensure wartime production was prioritized, conducting a national inventory of wartime supply needs and production capacity and coordinating the supply chains of all core war production inputs (machine tools, rubber, metals, timber, coal, oil, and more). The climate emergency demands a similar approach to economic planning. We must again conduct an inventory of conversion needs, determining how many heat pumps, solar arrays, wind farms, electric buses, etc., we will need to electrify virtually everything and end our reliance on fossil fuels. We will need a new generation of Crown corporations to then ensure those items are manufactured and deployed at the requisite scale. We will require huge public investments in green and social infrastructure to expedite the transformation of our economy and communities. And as we did in the war, we will need to mobilize labour to get this job done, banishing unemployment in the years to come.

Spend what it takes to win. A benefit of an emergency or wartime mentality is that it forces governments out of an austerity mindset and liberates the public purse. The Second World War saw an explosion in government spending. In order to finance the war effort, the government issued new public Victory Bonds and new forms of progressive taxation were instituted. Yet these new taxes and what remain to this day historic levels of public debt did not produce economic disaster, as is so often claimed. On the contrary, they heralded an era of record economic performance. As we confront the climate emergency, financing the transformation before us requires that we employ similar tools.

Leave no one behind. The Second World War saw more than one million Canadians enlist in military service and a similar number employed in munitions production (far more than are employed in the fossil fuel industry today). After the war, all those people had to be reintegrated into a peacetime economy. That too required careful economic planning, and the development of new programs for returning soldiers, from income support to housing to post-secondary training. Those post-war programs weren’t simply the result of government largesse and goodwill; they stemmed from the demands of labour and social movements, who after the ravages of the Depression and war insisted on a new deal. The ambition of these initiatives provides a model for what a just transition can look like today; they should inspire us to develop robust programs for all workers whose economic and employment security is currently tied to the fossil fuel economy, with a special focus on those provinces and regions most reliant on oil and gas production.

Reject the straitjacket of neo-liberal economic thinking. The previous lessons all share a common thread—the casting off of free market economic ideas and assumptions that have kept us from doing what we need to do in the face of the climate emergency. During the war, given the urgency and scale of the task, both the general public and private sector leaders understood that the economic transformation had to be state-led. Canada’s Second World War government was by and large a free market-oriented administration (indeed, that orientation had severely constrained government action during the Depression of the 1930s, at the price of great hardship). But in the face of the urgent need to confront fascism, its leaders were no longer ideologically rigid. They were prepared to embrace a level of economic planning, public investment and public enterprise that seemed previously unimaginable.

Click here to order a copy of Klein’s A Good War: Mobilizing for Canada’s Climate Emergency.