The bad, worse and great news about energy.

The bad news is, the paleo record indicates the impact of global warming could be as much as three times greater than the 1.5oC aspiration of the 2016 Paris Agreement.

The worse news is, we are paying as much as five times the true cost of energy.

The great news is, for the true cost of energy we could be getting twice as much energy as we are currently deriving from fossil fuels and $15.48 trillion a year to address the next 9 concerns on Richard Smalley’s list of concerns confronting mankind.

The following figure from David Wasdell’s presentation Climate Dynamics: Facing the Harsh Realities of Now shows that as of 2015 when he made the presentation, the planet was looking at warming of as much as 5.3oC once all four of the climate sensitivities, of which carbon is only one kick in. 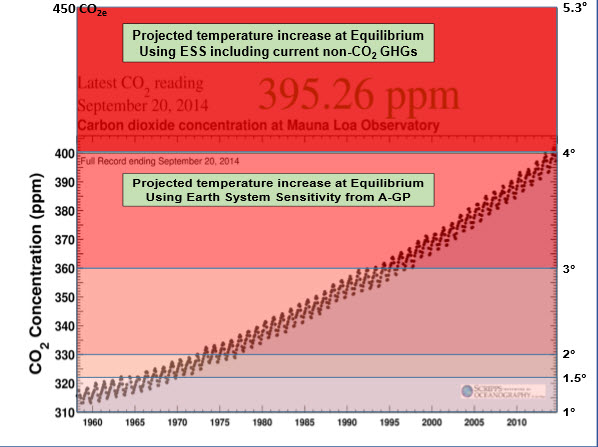 Per the following graphic, the cost of fossil fuels, the environmental externalities and fossil fuel subsidies eat up close to 23 percent of the total global GDP for 2018. 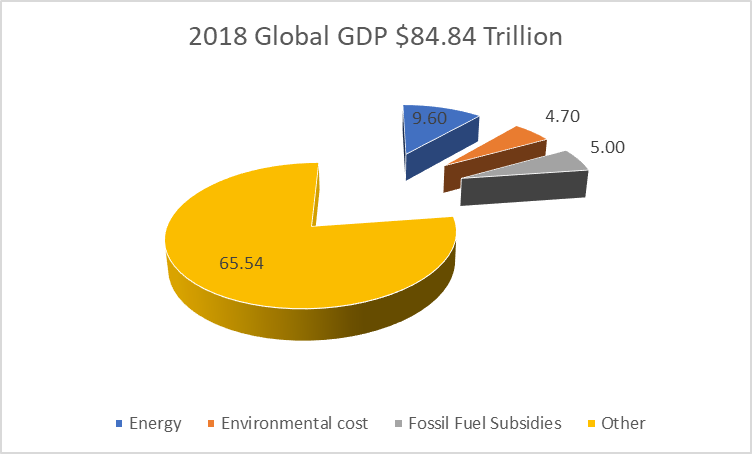 The assumptions associated with the cost of energy are:

The cost is initially delineated in Barrel of Oil Equivalent (BOE)

According to InflationData.com, the inflation adjusted historical price for Illinois Sweet Crude 2011-2019 is $70.70 per the following table.

The inflation adjusted price uses the Consumer Price Index as presented by the Bureau of Labor Statistics.

The following table based on data compiled by statista.com shows that between 1998 to 2018 the global energy consumption worldwide in million metric tons oil equivalent (MTOE) was 11586.995, at a conversion rate of 7.33 barrel per TOE would cost about $6 trillion.

Since we don’t buy energy by the barrel, it is priced here by the gallon in the US with a conversion rate of 42 gallons per barrel.

The average price should be ($70.70/42) = $1.68 per gallon, but according to the Office of Energy Efficiency & Renewable Energy (EERE) the average cost between 1998 and 2015 in constant 2015 dollars was $2.68 per the following table with the difference being distribution and marketing costs of 13%, refining costs and profits of 13% and federal and state taxes of 17% .

So, the prorated cost to the consumer is closer to $9.6 trillion as above.

According to Dr. Tans, the cost of wind, solar, and batteries is getting cheaper every year but neither they nor fission or fusion do anything to reverse surface warming, sea-level rise or ocean acidification.

He says, the second priority is energy efficiency and conservation so that we will not need as much energy for the same benefit, but this turns Richard Smalley’s argument in his Terawatt Challenge on its head.

Smalley said, “With energy at the top, we can see how energy is the key to solving all of the rest of the problems (of mankind)—from water to population. . . . To give all 10 billion people on the planet the level of energy prosperity we in the developed world are used to, a couple of kilowatt-hours per person, we would need to generate 60 terawatts around the planet—the equivalent of 900 million barrels of oil per day.”

Global warming is itself an energy source. The literature estimates that the oceans have gained on average 384 terawatts of heat annually between the years 1991 to 2016. The conversion rate of this heat to work with thermodynamic geoengineering can be as high as 7.6% so, 29 terawatts of energy a year is available from the stored and stratified heat of the tropical oceans.

With Negative-CO2-emissions ocean thermal energy conversion surface heat can be moved into the depths and converted in part to work, while cooling the surface, producing hydrogen, reducing sea-level rise and neutralizing ocean acidification.

Per the following, at the conversion rate of 500,000 tonnes of CO2 per gigawatt of energy produced it would only take 75 years to return atmospheric CO2 levels and ocean acidity levels to preindustrial.

So, what are the economic costs?

They and the assumption upon which they are made are as follows:

Heat moved to a depth of 1000 returns at a rate of 4 meters/year thus is back at the surface in 250 years where the heat not previously converted to work can be recycled.

The following chart shows how the global GDP could be divvied up to achieve Smalley’s goals if energy was produced in what Amory Lovins of the Rocky Mountain Institute calls an “optimized system for multiple benefits which in turn is sufficiently efficient to produce twice the energy we are getting from fossil fuels. 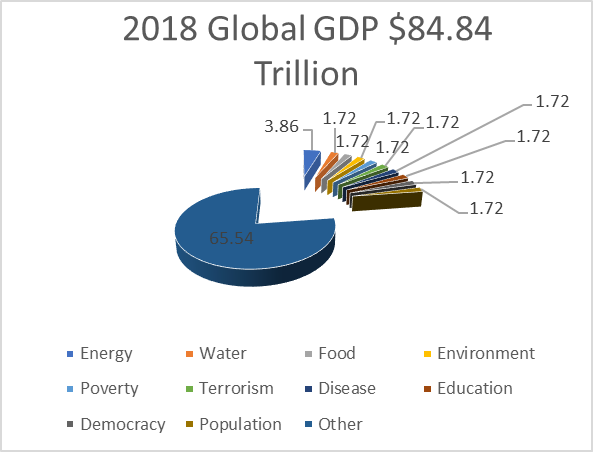 The assumption is the energy cost of $3.86 trillion is twice the 1.9 trillion cost for the 200 MW NEOTEC plant showing in the table above.

The energy game is being played for the highest stakes imaginable, human civilization, but on the current path, we are losing the game.

With Negative-CO2-emissions ocean thermal energy conversion surface heat can be moved into the depths and converted in part to work, while cooling the surface, producing hydrogen, reducing sea-level rise and neutralizing ocean acidification.

I see that this paper is nearly a year old-- I'm curious if you know if there's been any update or significant work towards this strategy in the year since?

The funding for publishing and attending conferences that arrive weekly, isn't available. As is the funding for advancing the research.

This situation may be resolved, hopefully, in the near future.

Thanks as always to staff of energycentral and its interested readers for the interest.