In response to the question, How fast are the oceans warming? Cheng et al. report this week the answer is 40 to 50 percent faster than the last estimate of the Intergovernmental Panel on Climate Change (IPCC).

National Geographic says if all the heat the oceans have absorbed from 1955 onward were suddenly added to the atmosphere, air temperatures would rocket by more than 60 degrees per the above graphic that shows the current atmospheric temperature at about 1 degree above the 1955 baseline per the following. 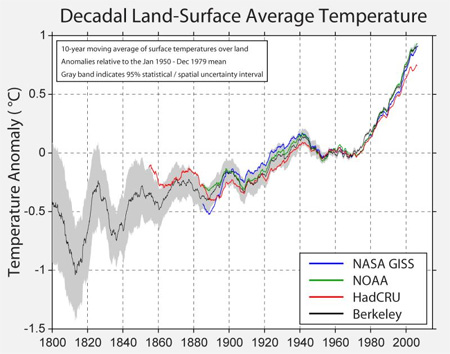 To make the situation even starker, the following graphic from Cheng et al. shows if  greenhouse emissions continue to rise throughout the 21st century, the ocean to a depth of 2000 meters could warm by as much as 1 degree Celsius. 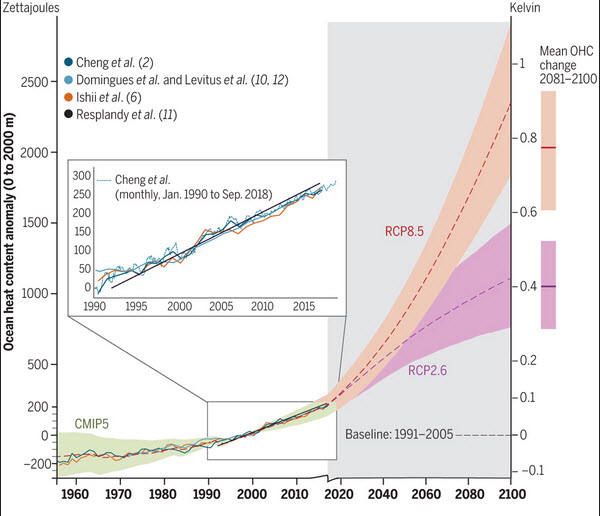 As Zeke Hausfather, one of co-authors of the “Science” paper says, the oceans are the best thermometer we have for the planet and 2018 was the ocean's hottest year and we'll feel it a long time.

The IPCC’s Fifth Assessment Report says “Adaptation and mitigation are complementary strategies for reducing and managing the risks of climate change. Substantial emissions reductions over the next few decades can reduce climate risks in the 21st century and beyond, increase prospects for effective adaptation, reduce the costs and challenges of mitigation in the longer term and contribute to climate-resilient pathways for sustainable development.” But if they have discounted ocean heat by as much as 50%, how can anyone take any of their pronouncements about climate policy seriously?

Or those of economists like Alan Greenspan, Paul Volcker, Ben Bernanke, Janet Yellen and the two dozen other economists on the on the Council of Economic Advisers who signed a statement today expressing their support for a new tax on greenhouse gas emissions that would combat climate change while giving back revenue to taxpaying Americans?

Isn’t basic math elemental to the study of economics?

The theory goes, we want to encourage, income, investment and innovation and shift taxes onto pollution, greenhouse gas emissions and waste but that isn’t an energy plan.

An energy plan would convert ocean heat to productive energy that can be consumed by the 9 billion expected to live on this planet by mid-century.

Today’s 60 degrees is going to come out of the ocean eventually and in the alternative could provide jobs, income, investment and taxes for 3,250 years.

According to NOAA it takes about 1000 years for water to be cycled through the oceans by the thermohaline circulation but the longer this heat is maintained within the oceans the less impact it will have on the atmosphere and the more environmental benefit it can provide.