A promise to compel your children to do something you aren’t prepared to do your self is hypocrisy that they will never forgive you for.

A tax on carbon intended to bring about a reduction in carbon dioxide concentrations in the biosphere that fails to produce the desired result is an indefensible misallocation of vital resources.

An international agency that purports to be the arbiter of environmental reason that vastly underestimates the long-term implications of climate change is simply shilling for the status quo.

Scientists who shape the climate facts in the image of their own bias are a danger to humanity and should be stripped of their tenure for cause.

Politicians unabashedly under the sway of fossil fuel interests are reprehensible and need to be exposed and voted out of office at the soonest opportunity.

When they willfully impeded viable solutions to the problem of global warming these politicians should face an international court of climate justice for crimes against humanity.

Climate sensitivity is the global equilibrium surface temperature response to changes in radiative forcing caused by a doubling of atmospheric CO2 concentrations. It depends on processes that operate on many different timescales, from seconds to millions of years, due to both direct response to external radiative forcing, and internal feedback processes.

Fast feedbacks include; changes in water vapor, natural aerosols, clouds, and sea ice, slower surface albedo feedbacks from changes in continental ice sheets and vegetation, and climate-greenhouse feedbacks from changes in natural (land and ocean) carbon sinks. It is the only forcing the IPCC has traditionally considered, which is why it continues to claim there is still 10 to 12 years left to address the warming problem, whereas the carbon budget is in fact already massively overdrawn.

Procrastination is the politician’s stock-in-trade and thus putting off efforts to address the problem beyond the limit of their term of office suits them to a tee.

This is why the IPCC has a political mandate from governments to only make short-term projections because governments just don’t want to know about or solve the real problem.

The following chart from the paper, Sensitivity and the Carbon Budget: The Ultimate Challenge of Climate Science by David Wasdell, Director of the Apollo-Gaia Project shows that at 410 ppm CO2 concentrations the world is actually looking at long-term warming just shy of 5oC and a doubling of these concentrations from the baseline of 280 ppm would bring us 8oC. 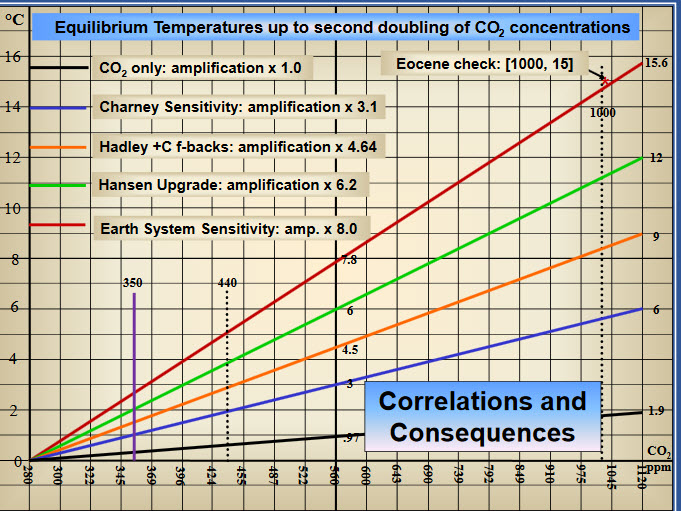 The longer-term, slow, forcing will be due to albedo feedbacks that are dominated by century-long and longer changes in global vegetation cover and global ice area/volume, but the greatest impact will be due to the thermal inertia of the oceans that are accumulating over 90% of the heat of the warming.

While we are witnessing the warming of surface ocean waters leading to the formation of larger and more powerful storms, the temperature of the deep oceans is increasing, virtually imperceptibly, through the heating of meltwater that initially ranges in temperatures from between -2 and 4oC.

According to IPCC AR5, the ocean heat content has increased by about 2.5 X 1023 Joules since 1970 (IPCC AR5). Distributed evenly over the entire global ocean this means a temperature increase of only 0.05°C but 90% of the volume of the oceans exist below the surface. Once warmed it will take as many as 2 cycles of the thermohaline circulation for this heat to be fully processed.

So, until the whole ocean warms up we won’t feel the full effect of global warming.

In the interim, the Laws of thermodynamics dictate that the heat of warming can be converted to more productive forms of energy. They also dictate that heat moves from a region of warmth to a cold, which is why the Arctic is warming over 3 times faster than the rest of the planet.

The deep oceans are colder than the tropical surface and heat pipes can relocate this heat to the cold heat sink and direct it through turbines that convert some of it to useful work in the form of electricity.

The electricity can, in an electrochemical process, in turn, convert ground up rock to hydrogen, oxygen, sand and carbonates or bicarbonates that sequester CO2 and neutralize ocean acidity.

It is energy that solves the problem of global warming.

The saying goes there is no free lunch. All thermodynamic processes produce waste heat. A black body at a temperature of 18°C with a thermal blanket of 410 ppm CO2, however, becomes a black body of 13°C with a CO2 blanket of 280 ppm over the course of 3,250 years with the conversion of the heat of global warming to productive energy and the sequestration of the CO2 with negative-CO2-emissions ocean thermal energy conversion (NEOTEC).

The 5 degrees simply radiates back into space over this period.

Some call for reducing energy demand as part of the warming solution.

On the contrary, the more energy produced with NEOTEC the more surface ocean heat is reduced and the more CO2 is sequestered.

Instead of an economic carrot and stick approach to warming, we need to apply basic physics. That and to look beyond politicians for humanity’s salvation.