Are Durban Outcomes Historic or Hollow? (1) 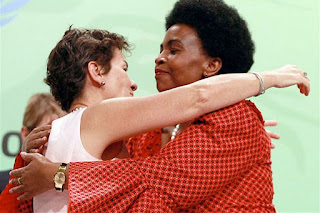 This is the first of two posts on COP17, the Durban-based UN climate change talks: this summarises the accords reached and others’ reactions; the next post following immediately is the Low Carbon Kid’s assessment of the accords.
After the longest conference in the history of UN climate summits, a “historic” agreement was reached, that was also described as “hollow” by civil observers.

The Durban Package set up by the conference will, for the first time, bring all greenhouse-gas emitting countries in the world into a common legal regime under UN jurisdiction in 2015, that would force them to cut emissions no later than 2020.

Defying expectations, the Kyoto Protocol has also been extended until 2017, which will “bear in mind different circumstances of developed and developing countries”.

The new global legal framework will be decided by 2015 and come into force by 2020. Called the Durban Platform for Enhanced Action, it will “raise levels of ambition” in reducing greenhouse gas emissions.

But the world’s most poor and low-lying states say that the accords still leave them vulnerable and the targets agreed are not sufficiently aggressive to slow the pace of global warming, which threatens them most.

The phrasing of the agreement came at the last moment from huddled discussions between the European Union, India, China and the United States that left other nations, especially Russia, feeling left out.

U.S. climate envoy Todd Stern said he was was satisfied with the outcome, saying it had “all the elements that we were looking for”.

But the U.N. climate chief Christiana Figueres expressed regret that “What [the agreement] means has yet to be decided” because of the ambiguity of the language.

The EU’s Climate Commissioner Connie Hedegaard said that the EU will lead by example now on tackling climate change. She admitted that the phrase “outcome with legal force” is weak wording, but insists it is at least an improvement on the Bali Roadmap, where there was no legal element.

The view of campaigners representing civil society was less enthusiastic.

A WWF spokesperson commented, “The job of governments is to protect their people. They failed to do that here in Durban today. The bottom line is that governments got practically nothing done here COP17 and that’s unacceptable”.

The agreement does, however, importantly acknowledge that “there is a gap between the aggregate level of reduction in emissions of greenhouse gases to be achieved through global mitigation efforts” and what is needed to avert dangerous climate change.

At the request of the EU and the Alliance of Small Island States (AOSIS), the delegates agreed to launch a work plan to identify options for closing this gap.

“It’s certainly not the deal the planet needs – such a deal would have delivered much greater ambition on both emissions reductions and finance,” said Alden Meyer of the Union of Concerned Scientists.

“Negotiating the details will be extremely tough,” said Elliot Diringer of the Center for Climate and Energy Solutions, a Washington think-tank.

Many side issues could easily flare up and disturb the highly delicate negotiations.

Although the final documents are not yet publicly available, here is a summary of what was agreed or not agreed:

Following criticism, developed countries were urged to improve the transparency of their reporting on the fulfilment of their fast-start finance commitments ($30 billion for the period 2010–2012).

How to finance the Green Climate Fund that, in principle, will help channel up to 100 billion dollars a year by 2020 to poor countries, was not agreed, but a group was set up to put forward proposals.

An earlier proposal to do raise finance by charging international shipping for the carbon emissions it generates faced such opposition it did not make it to the final text.

“We cannot allow the Green Climate Fund to wither on the vine,” said Celine Charveriat of Oxfam. “Governments must identify significant and predictable sources of money for the Fund without delay.”

After years of debate it was decided whether and how to allocate carbon offsets under the Clean Development Mechanism to carbon capture and storage projects.

Because of the considerable uncertainty about their yet unproven efficacy, developers will have to put 5% of the credits earned in reserve so they will be awarded only after 20 years, provided that no carbon dioxide has leaked from the underground store.

A decision on whether to extend it after 2012 was again deferred until next year, raising the possibility that those countries with emissions credits may flood the market with them before the scheme ends.

Developed countries must prepare biennial reports on their emissions and on their projects to reduce emissions, in accordance with their national circumstances.

A common format for these to be reported, through a website, is to be agreed.

Developing countries will go through a similar parallel process, with their first biennial update report submitted by December 2014; by 5 March next year they must also submit information about their nationally appropriate mitigation actions and low-emission development strategies, in order to obtain financial and technical support by developed countries.

Developed countries, the Global Environment Facility and the Green Climate Fund, must submit information on the financial, technological and capacity-building support they can give to support these actions and strategies by the end of 2014, and the first rounds of international consultation and analysis in distributing the support will then be conducted by summer 2015.

Countries will submit by 5 March 2012, their views on how to finance results-based actions under REDD (Reducing Emissions from Deforestation and Forest Degradation in Developing Countries). These will be discussed before COP18.

No proposals were made on reducing emissions from agriculture, and the conference only agreed to continue to consider the issues related to addressing emissions from international aviation and maritime transport.

Crucially, it was underlined that “any help given to developing countries must also help their social and economic development and poverty eradication” and “promote a just transition of the workforce, the creation of decent work and quality jobs in accordance with nationally defined development priorities and strategies”.

The Adaptation Committee, agreed to last year, had its role is more clearly defined and was instructed to develop a three-year plan for its work.

To facilitate technology development and transfer from developed to developing countries, a new Climate Technology Centre and Network is being set up as soon as possible, once it’s decided where it is to be hosted.

There will also be an annual ‘Durban Forum’ held to discuss progress on capacity-building. Its first meeting will be during the thirty-sixth session of the Subsidiary Body for Implementation (14–25 May 2012).

A review of the adequacy of the long-term global goal for reducing emissions and the overall progress made towards achieving it should run from 2013-2015.

Subsequent reviews should take place following the adoption of an assessment report of the Intergovernmental Panel on Climate Change, or at least every seven years.