Over the past month, the Trump administration has pressed forward with rollbacks of federal protections from oil and gas methane pollution — a move that will result in millions of tons of additional emissions every year and endanger public health, air quality and our climate.

The loss of these protections underscores the importance of Gov. Michelle Lujan Grisham’s commitment to nation-leading methane rules in New Mexico. Achieving the governor’s goal will require regulators to close loopholes in their proposed rules that would leave emissions from 95% of oil and gas wells across the state unchecked.

As EPA turns its back on science, communities count on the state to lead

New Mexico is currently the nation’s No. 2 oil producing state, behind only Texas, and the latest data highlight the severity of its pollution problem. EDF analysis shows the state’s oil and gas operators emit roughly one million tons of methane annually, which has the same near-term climate impact as 22 coal-fired power plants.

What’s more, emissions from the state’s Permian Basin have continued at an alarming rate. A peer-reviewed study this April found that operators emit roughly 3.7% of the natural gas they produce — at least twice the national rate and the highest emissions ever measured from a major U.S. oil and gas basin.

That pollution has clear consequences for New Mexicans’ health and wellbeing. According to the American Lung Association, all of New Mexico’s major oil and gas producing counties received failing grades for air quality. For residents living closest to oilfield development, air toxics like smog-forming volatile organic compounds and carcinogenic benzene pose serious health risks. As federal pollution rules are gutted, residents are counting on the state to step in with strong rules.

However, if exemptions in the proposed rule are not eliminated, communities in New Mexico that have historically borne a disproportionate share of pollution will continue to face the brunt of these avoidable emissions. The chart below shows the percentage of various populations living within a half mile of wells that would be exempt from pollution safeguards. Overwhelmingly, it is young children and Black, Indigenous and Latino communities who face outsized pollution impacts. 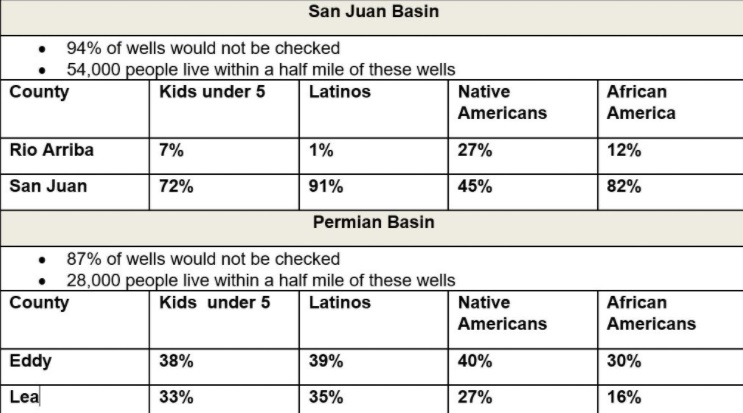 In addition to addressing issues of environmental equity, comprehensive rules to curb oil and gas emissions can deliver significant benefits to New Mexican communities and the state’s economy. A recent report from Synapse Energy Economics reveals that strong rules without current exemptions — for both low-producing wells and those under a 15 ton per year pollution threshold — would prove cost-effective for the state and offer residents a strong return on investment.

The report takes a conservative approach in assessing the benefits of pollution reduction, determining that over the next decade comprehensive emission rules would create $126 million in human health benefits from reduced smog-forming VOC pollution, $1.2 billion in avoided air quality nonattainment costs, and $730 million worth of captured natural gas — which would yield roughly $99 million in additional state royalties.

On the whole, every dollar invested by the state’s oil and gas industry in reducing emissions would generate a 30% return on investment for New Mexicans. Stronger pollution rules are a clear economic win for the state, and offer a clear path to cleaner air, healthier communities and increased revenue to support priorities like education.

As New Mexico’s state agencies weigh public input on their proposed oil and gas emission rules, it’s critical that they listen to the diverse array of stakeholders calling for the removal of current exemptions.

Specifically, the Environment Department needs to remove exemptions for low-producing wells and its 15 tons per year pollution threshold for VOCs. These provisions effectively exempt 95% of the state’s wells, and recent peer-reviewed science underscores the need to address low-producing marginal wells, noting that “a surprising number of them are venting all or more of their reported produced gas to the atmosphere. This makes marginal wells a disproportionate greenhouse gas emissions source compared to their energy return, and a good target for environmental mitigation.”

As the loss of federal pollution protections looms over the state, New Mexicans are counting on their state agencies to live up to Gov. Lujan Grisham’s commitment to nation-leading methane rules. Those agencies have an opportunity to craft stronger rules that protect public health and air quality, while demonstrating the economic benefits of common sense, comprehensive policy.