The Affairs of States: In the Greening of America (Part 2) Americans are experiencing these disasters firsthand, and these personal experiences are informing their views on climate change regardless of their age or party affiliation

Politics are not the only things that are local. The consequences of climate change are being felt most acutely at the state and local levels. It’s at least part of the reason that state legislatures considered more than 2,500 energy-related measures in 2020 covering a wide range of policies—from transportation electrification and other efforts to reduce emissions economy-wide, to support for clean energy and new energy storage technologies. (See Figure 1)

The increased incidence and power of hurricanes, droughts in America’s farmlands, and the burning of the nation’s forests are events credited to Earth’s warming. It is a phenomenon attributable to the emission of greenhouse gases by the burning of fossil fuels.

AccuWeather reported a record-breaking 2020 Atlantic basin hurricane season was so intense and spawned storms so frequently that the weather service ran out of names on the preset list and used letters from the Greek alphabet to name the events. The economic toll of the 30-named storms was north of $60 billion.

2020 was also a year of record forest fires. Their financial toll was more than twice the cost of storms—estimated at between $130 to $150 billion. The emotional toll of these natural disasters—made worse by the contagion—is incalculable. See Figure 2 for where 2020’s billion-dollar disasters fell.

President Biden has put forward an aggressive climate crisis response plan. If the immediate past is prologue, however, Congress will continue in gridlock. In which case, the President will have only the impermanence of executive orders to address the climate crisis, and Congress will be called upon for increasing sums of disaster assistance. 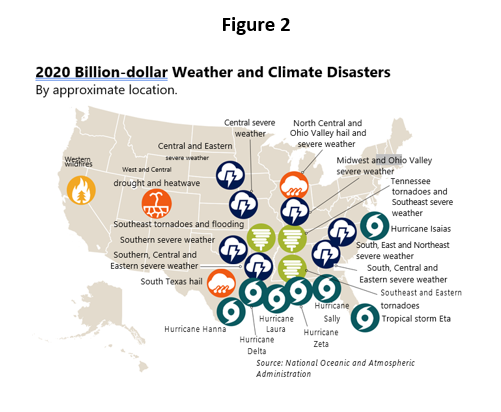 Picture yourself as a state legislator who is generally understaffed, overworked, and underpaid, wanting to slow, forestall, or adapt to the destructive forces brought on by Earth’s rising temperatures. How would you go about deciding what could or should be done? (See Figure 3)

Two groups out to make your task easier are the Climate Cabinet Education  (CCE or Cabinet) and the National Caucus of Environmental Legislators (NCEL). Both groups approach the policymaker’s dilemma through education.

Recognizing the critical role of state and local policymakers and what they are up against in terms of ready resources, CCE uses data and technology to centralize information in an actionable way. According to Emma Fisher, the organization’s Head of Strategy—

Climate Cabinet Education built a database in 2020 that combines climate impacts and solutions for every county in the US​, clean energy job creation, health impacts, climate voting records, and polling on climate questions.

CCE doesn’t stop at collecting information. Instead, it utilizes the banked data to fashion tools for climate champions both in and out of government.

The Cabinet’s collection of over a million data points covering 3143 counties allows it to “personalize” the information for lawmakers. There’s nothing like the future loss of a district to rising sea levels to grab the attention of both constituents and their legislative representatives.

Recognizing there is a problem is only part of the battle. It is imperative to be aware of available policy options and what’s involved in their development and implementation.

Well, the Cabinet has an answer—and quite an elegant one at that. They’ve taken the information and crafted a tool—Building Blocks of State Climate Policy— to help policymakers think through the issues associated with various high-priority tasks.

Figure 4 offers an overview of the issues and actions a state legislator may wish to take. Across the top are listed sectors of the economy and the percentage of greenhouse gas emissions for which they’re responsible. For example, Electricity contributes 27 percent of total GHG emissions. It’s second only to Transportation which pitches in 28 percent of emissions.

Reading down each column are sector-specific solutions. To the left of the sector boxes are categories of action. For Electricity, the first row is about setting standards. Reading across the row, under Electricity are solutions, e.g., modernize the grid by upgrading transmission, distribution, and storage. There are links to model legislation that can be used as a template—or at least a starting point—for each of the possible actions listed.

There are separate, more detailed graphs for each of the sector categories. Figure 5 is one of the four on transportation[i]. Visually the overview graphic is presented to help get the point across that the sectors and solutions are connected laterally and shouldn’t be siloed. The bones of the body politic are much like those in your body—the leg bone needs to be attached to the hip bone and so on to function well.

Again, referring to Figure 4, a bill that provides tax incentives for solar-generated electricity could include credits for electric vehicles, distributed solar systems, storage, and regenerative agriculture projects. Similarly, spurring private investments in clean energy and funding for research, development, and demonstration of new and emerging technologies cuts across multiple sectors. 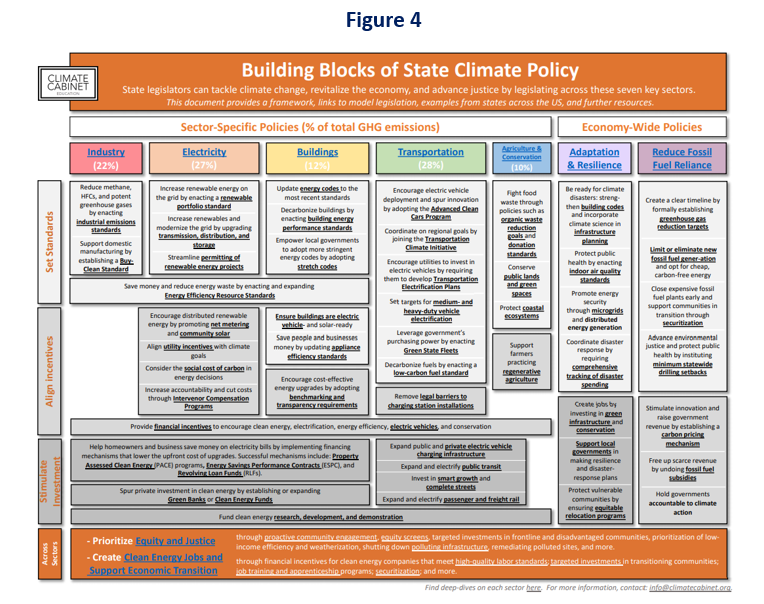 Climate Cabinet Education is working with organizations, individual policymakers, and activists to understand better what is happening in their communities and build tools to help them turn information into action.

In 2020 CCE worked with several Texas youth-led social justice organizations. The product of their collaboration with Texas Rising is the map in Figure 6.

The map combines granular socioeconomic, health, and environmental data to create a “cumulative risk score” for every county and census tract in Texas. The scores are used by Texas Rising, a project of the Texas Freedom Network, to train, organize, and empower youth advocates on the issues that matter most to their communities.

Texas Rising has a presence on more than 20 college and university campuses throughout the state. Like many southern states, Texas appears on the cusp of a political transition away from its very red roots. 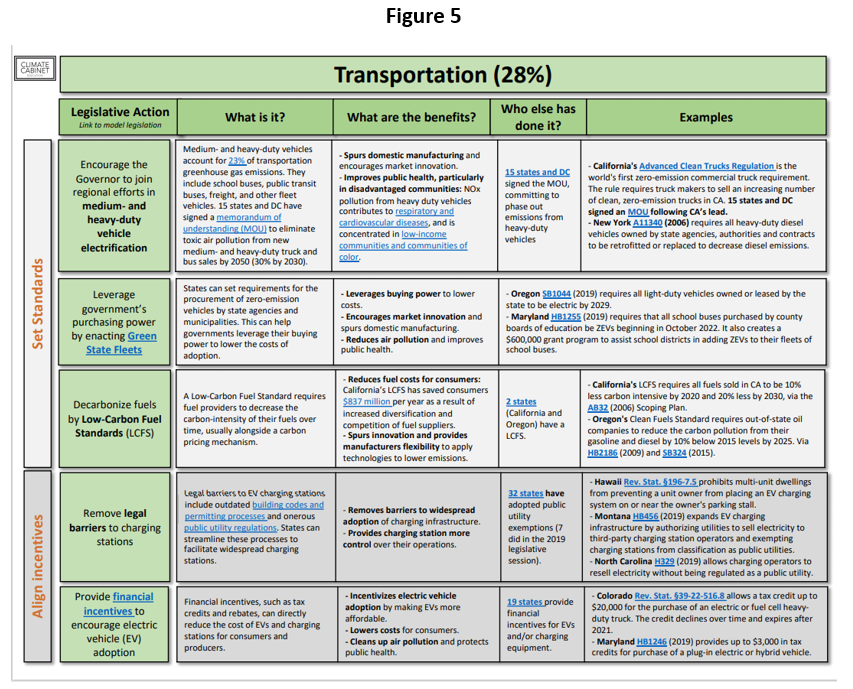 Texas demographics appear to be on the side of the Democrats. It has the fastest-growing population of any state in the union, and most are moving to the cities and suburbs where Democrats have an edge.

The Los Angeles Times reports the number of voters under 30 in the state is about three times the number in 2016. Texas Rising estimates that voters under the age of 30 will soon comprise 33 percent of eligible Texas voters. Change is coming to the Lone Star state. I suspect the next time Texans votes the results will be tinged blue and green.

Why green? The data is clear that Democrats and younger voters—whatever their party affiliation—are much more believing of climate science’s conclusions and the need to act aggressively now to have a chance of staying on the right side of history.

In December, the Cabinet met with 80 state legislators across 14 states at the “State Legislature Climate Action Summit.” The Summit was hosted in partnership with the National Caucus of Environmental Legislators (NCEL). 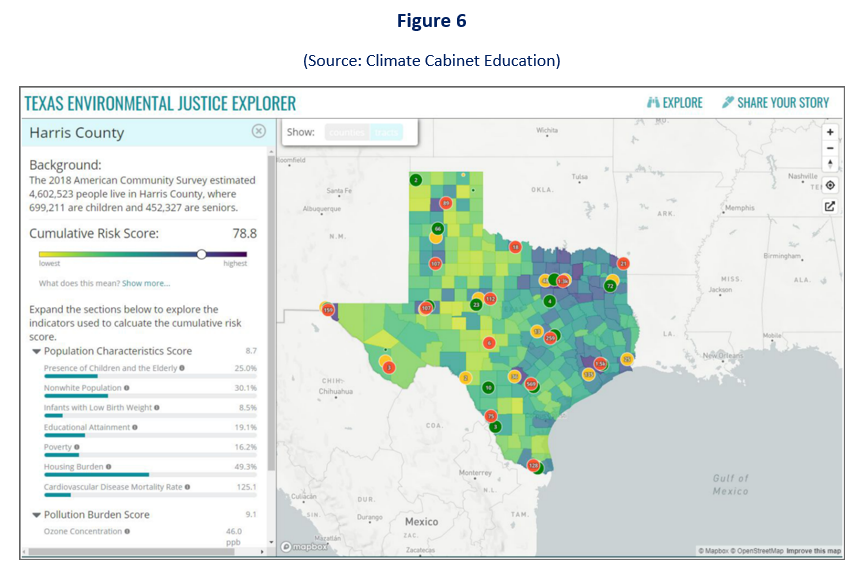 NCEL is a national, nonpartisan network of state lawmakers championing the protection, conservation, and improvement of the natural and human environment. As the Caucus’s membership totals nearly 15 percent of the over 7,300 state lawmakers in the US, it casts a wide net on behalf of sound climate policy.

The Caucus informs its members on a wide variety of environmental issues from wildlife corridors to carbon pricing and the growing 30x30 movement that seeks to have governments act to conserve 30 percent of Earth’s land, ocean, and water resources by 2030. NCEL offers its members neutral ground to explore various topics and learn from each other and recognized subject matter experts.

Jeff Mauk, NCEL’s executive director, is quick to point out that members find a lot to agree on, notwithstanding their states’ political differences. Conservation, storage, environmental justice, and offshore drilling are among those topics.

The Climate Cabinet is also looking forward to a busy 2021. The organization is continuing to build tools off of the collected data and working with groups like NCEL to get the information out.

CUT is pulling together a national database of MUDs and Co-ops. The database includes information on a utility’s characteristics, e.g., generating source, customer attributes, governance, etc.

The end product will be a tool similar to the Building Blocks of State Climate Policy for utility board members and directors. The tool looks to move the clean energy transition forward at their organizations. Solar and wind, along with efficiency measures, offer lower prices and better health to their communities. What the utilities are likely to get out of it is a more loyal customer base.

Enduring gridlock and the instability of federal climate policies are making the federal government more of the problem and less of the solution to climate change. The simple fact is that state actions can only go so far.

Moreover, the interests of state and local governments are not the same as those of Washington. Naturally, priority number one for them is surviving the increased incidence and severity of climate-related disasters. It is one of the reasons that President Biden’s climate and infrastructure agendas are being made part and parcel of the same proposed legislation.

As I wrote in Part 1 of the series, federalism is not what it used to be. Nor is it what it needs to be.

The Los Angeles Times reports the number of voters under 30 in the state is about three times the number in 2016. Texas Rising estimates that voters under the age of 30 will soon comprise 33 percent of eligible Texas voters. Change is coming to the Lone Star state. I suspect the next time Texans votes the results will be tinged blue and green.

These kinds of trends are definitely interesting to watch. The shifting demographics of our population and the likelihood of voters who came to age in the days where environmentalism was accepted and not some fringe, 'tree-hugging' aspect will be impactful for sure. What I really hope to see these changing population mindsets bring is a move towards green action on both sides of the aisle so the debate about the importance of climate change can stop being partisan and instead we can focus on earnest debates about the best solution to a problem we all agree has to be the #1 priority