The analysis modeled policies recommended in the peer-reviewed paper Technologies and Policies to Decarbonize Global Industry: Review and Assessment of Mitigation Drivers Through 2070, using the free and open-source U.S. Energy Policy Simulator (EPS) computer model, which recently added macroeconomic capabilities enabling the prediction of policy effects on GDP and jobs.

Not only is achieving clean industry possible – it is a smart investment that will more than pay for itself in economic growth, help maintain U.S. industrial competitiveness, and deliver large public health benefits.

Decarbonizing a key source of emissions

The industry sector is crucial for reducing GHG emissions, both as an inventor and supplier of clean energy technologies, and as a large emitter in its own right. 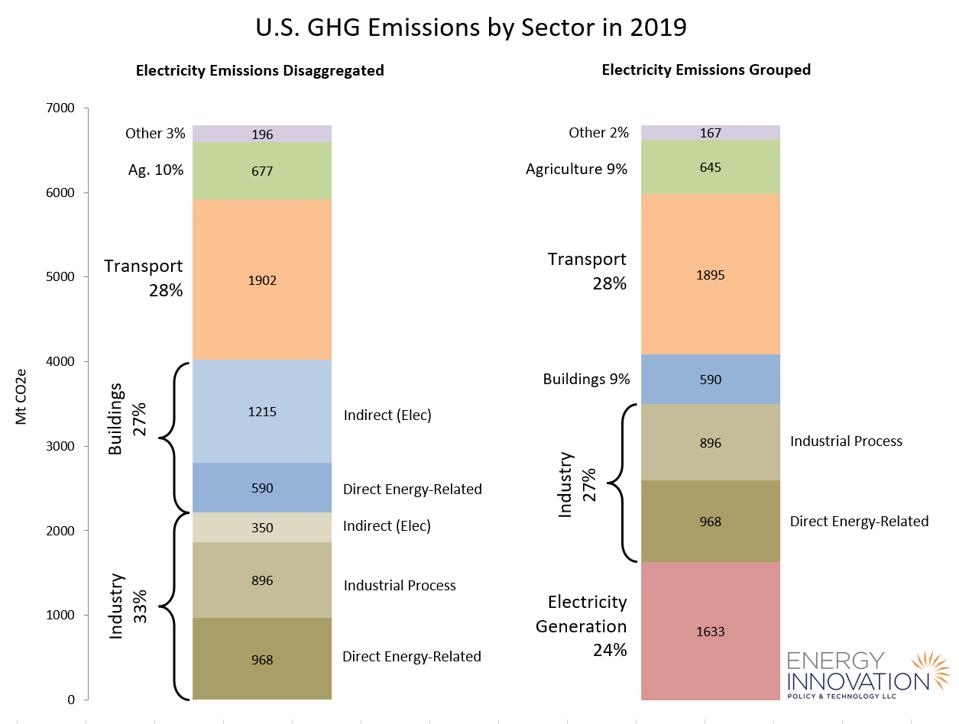 Industry burns fossil fuels primarily to heat boilers or for “process heating” – heat required for specific manufacturing processes, such as melting input materials or driving chemical reactions. Industry uses most electricity for “machine drive” – i.e., devices such as pumps, fans, and conveyor belts. Relatively little electricity is used for process heating, and almost none is used to heat boilers.

Industry’s substantial fossil fuel use, often used to generate medium-to-low temperature heat, illustrates the large potential for cost-effective electrification. Generally, the lower the temperature requirement, the cheaper it is to replace a fossil fuel-burning system with electricity. Heat pumps, which move heat like a refrigerator operating in reverse, are the most efficient electrical heating technology and may be able to satisfy temperature demands up to 100˚-150˚ Celsius.

Electricity can deliver much higher temperatures using resistance, induction, microwaves, or other techniques. For the highest temperatures or instances when a reactant is needed (e.g., primary steel production), using electricity to split water into hydrogen then burning the hydrogen, can be the most effective option.

In the top 14 GHG-emitting U.S. industries, essentially all boiler heat demand and nearly half of process heat demand is for temperatures that do not exceed 300˚ C. 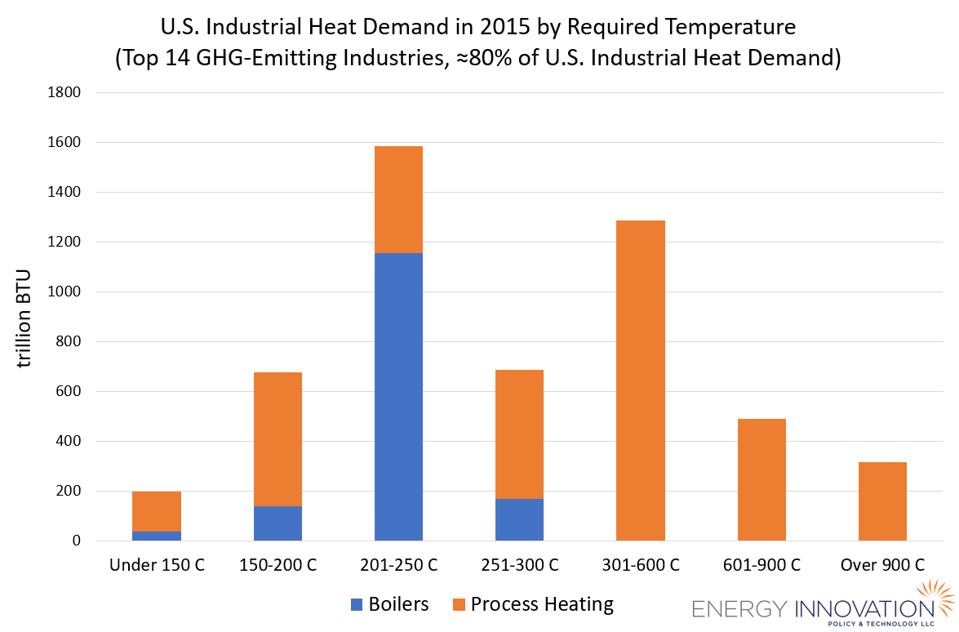 The industries in the graph above account for roughly 80% of U.S. industrial heat demand. Additional heat demand at temperatures under 150˚C comes from industries not among the top 14 GHG emitters, such as food processing, so the figure above does not show the full potential for inexpensive electrification of U.S. industry.

Cutting industry emissions and expand the economy through seven policies

Earlier this year, a major paper by 30 industry sector experts discussed technologies and policies to decarbonize global industry by 2070. Some of the technical and policy approaches recommended in that paper were modeled in the recently-released version 3.1 of the U.S. Energy Policy Simulator to assess the emissions and economic impacts of rapid U.S. industry sector decarbonization, including:

These policies reduce 2050 U.S. industrial GHG emissions from 2,474 metric tons of carbon dioxide equivalent (Mt CO2e) to 302 Mt CO2e, an 88% reduction relative to a business-as-usual (BAU) case. Shifting hydrogen production to electrolysis reduces emissions by 267 Mt CO2e in total, but most of these savings are not shown on the Industry sector graph below, since hydrogen supply is considered its own sector in the EPS. 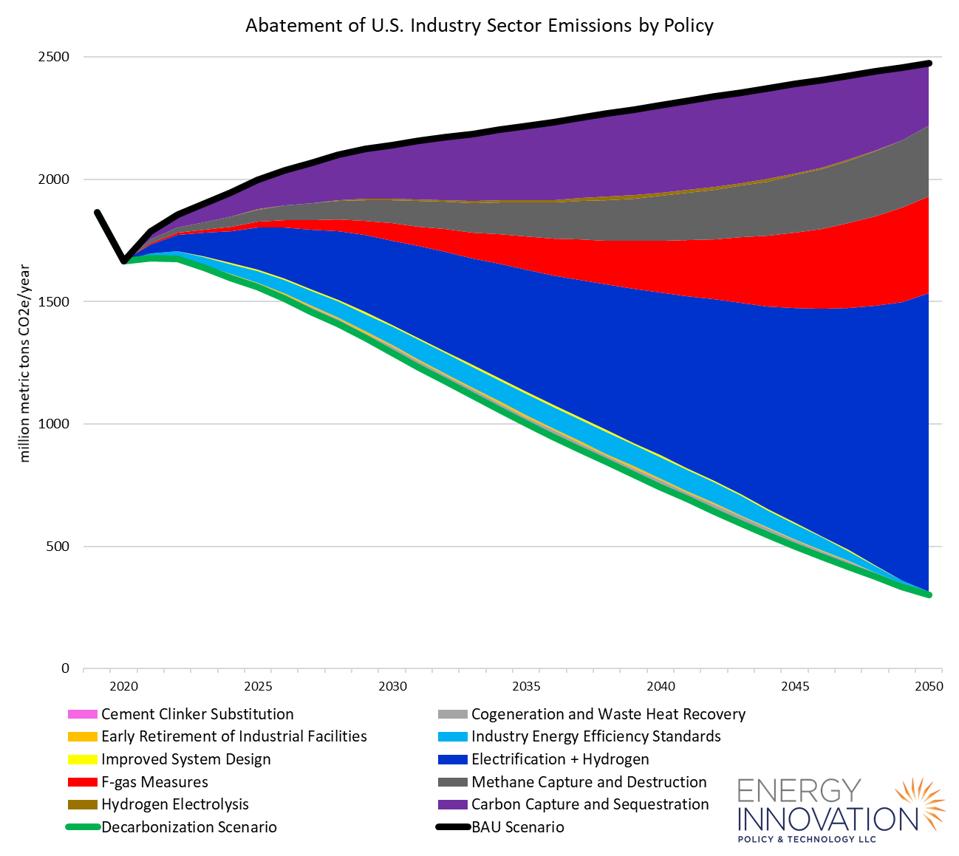 National GDP increases due to the large investments involved in putting U.S. industry on a near net-zero pathway such as purchasing electrified equipment and equipment to create, store, and use hydrogen, reaching 3.3% above BAU by 2050. One of the largest contributors to increased GDP, the red “Fossil Fuel and Utilities” line in the graph below, consists of new output in the hydrogen supply and electricity sectors. The yellow “Other Contributors” line stems primarily from workers spending additional money they earned on consumer goods and services, as well as from government savings and additional sales tax revenue on equipment and energy, which is respent or rebated as reduced taxes on households.

Manufacturing and construction output (blue line) grows modestly, as the additional costs industry pays for new equipment and for electricity or hydrogen are slightly more than offset by the increase in spending on industrial products. 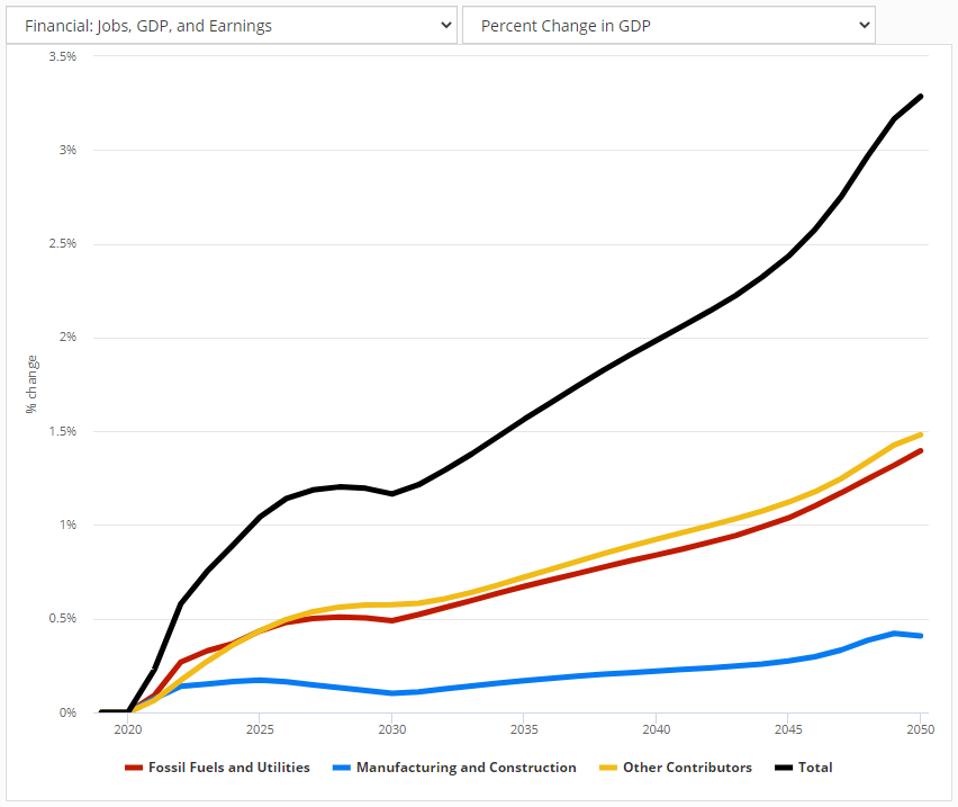 Employment is correlated with economic output, so a near net-zero emission pathway increases jobs in a way similar to the GDP growth forecast. The main difference is that the yellow “Other Jobs” line pulls well ahead of the red “Fossil Fuel and Utility Jobs” line, because the businesses providing goods and services to consumers tend to be labor-intensive (such as retail stores, restaurants, schools, and healthcare), so they generate more jobs per unit GDP than electricity or hydrogen production (which are both capital-intensive sectors). 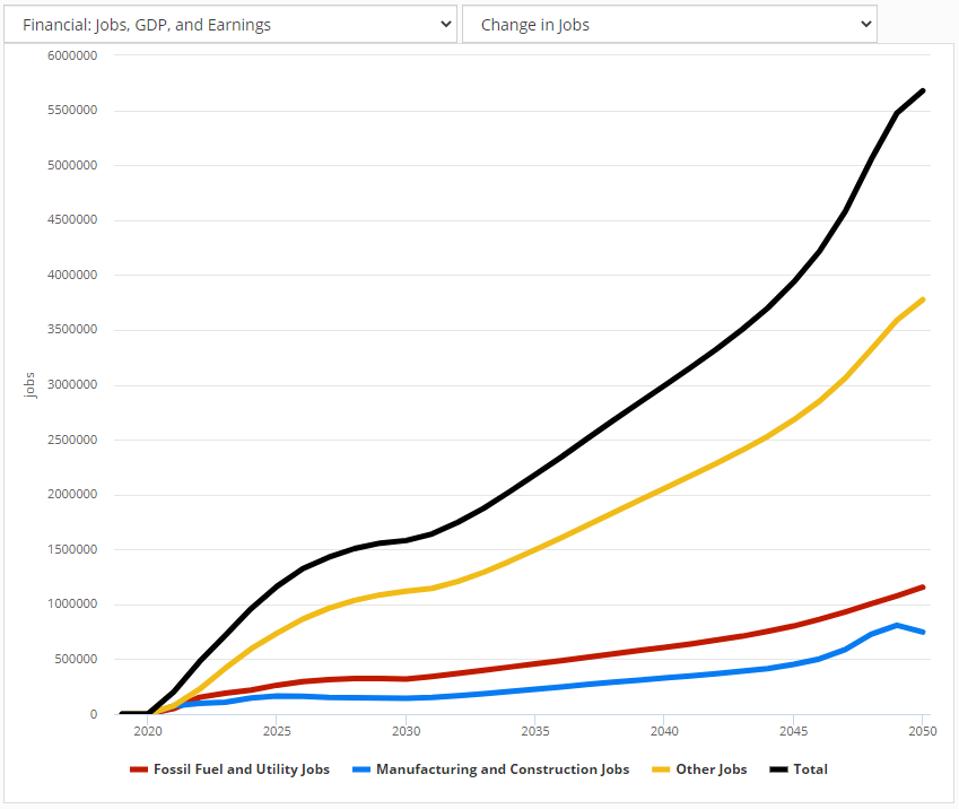 In addition to reducing GHGs, these policies reduce conventional smokestack pollution and avoid approximately 15,000 premature deaths, 8,600 hospital emissions, and almost half a million asthma attacks per year by 2050. Switching from fossil fuels to electricity and clean hydrogen is responsible for preventing most of these deaths. This is because industry process emissions abatement reduces GHGs, not conventional pollutants, while energy efficiency, retiring inefficient facilities, waste heat recovery, and improved system have a diminishing impact on conventional pollutants as industry transitions to clean energy. 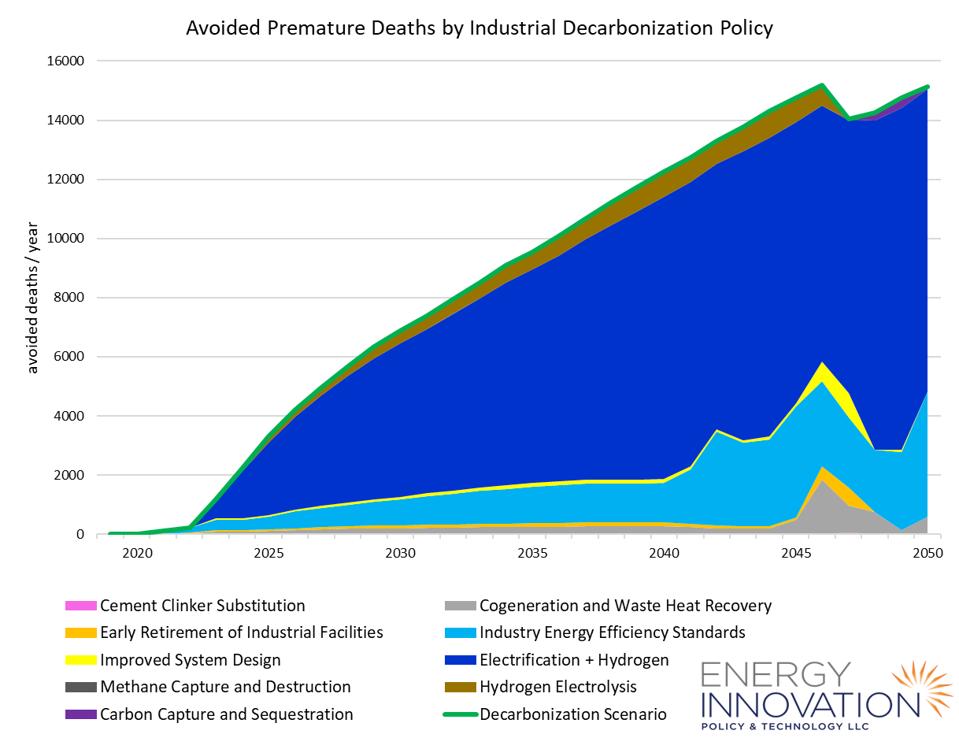 Decarbonizing industry is a smart business - and climate - strategy

Decarbonizing the U.S. industrial sector is an urgent and necessary part of achieving the goal of net-zero emissions by 2050. The good news is that transitioning to clean energy can boost the economy and create millions of jobs, while additional industry revenue from this economic activity will fully offset the industry costs of upgrading its own equipment.

Moving to clean and sustainable industry will also help secure the U.S.’s place as a technology leader, a smart business decision at a time when inefficient and dirty manufacturing are increasingly seen as business liabilities that will threaten producers’ ability to sell into global markets.

Today’s manufacturers don’t have to choose between decarbonization and business success – transitioning to zero-carbon processes over the next several decades is a key part of business success. Original post.