AC/DC: In the New Current Wars, Will Edison Win Out After All? In the late 1800s, as the United States embarked on a public effort to electrify the country, the “War of Currents” pitted Alternating Current (AC) power against Direct Current (DC) power. On one side was Thomas Edison, an advocate of DC power.  On the other side was George Westinghouse, who had acquired the patents for AC power held by Nikola Tesla. In the end, the capability of AC power to run at high voltage from large central generating stations over long distances with relatively inexpensive transformers to “step down” and “step up” the voltage made AC the victor, setting the industry standard. As the electric power sector modernizes, however, two substantial changes could signal a return to the war of currents.

First, declining costs and increasing options in distributed generation (DG) may offer an opportunity for microgrids and low-voltage transmission close to loads. These are the optimum conditions for the utilization of DC power, which can be more efficient than AC.

Second, improvements in battery technologies are driving down costs for localized energy storage. Batteries, which deliver DC power, offer many advantages to the electric system for supply side management, but also for demand side management. Eliminating spikes in demand could dramatically reduce expensive peak power generation needs.

The truth is, a surprising amount of today’s electronic devices are already DC. When I plug in my laptop, what goes into the computer itself is DC power – the power cord contains an inverter to change the current from AC at the plug to DC at the device. Every smartphone or other electronic device that charges from a USB cable uses DC power. That little USB plug that you put in the wall – that’s an inverter.

LED lights are also based on DC technology. The bulb contains a micro-inverter to change from AC to DC power, but at a cost. The conversion leads not only to reduction in efficiency, but also reduction in operable life. LEDs already last longer than incandescents and CFLs, but when they fail, it is the usually inverter that goes, not the bulb itself.

The biggest opportunity comes from the fact that the leading form of distributed generation, solar photovoltaic, creates electricity in DC. Now, solar owners need an inverter to get the power into AC for the grid and our AC-wired homes – again, at a cost. The typical derating of solar from nameplate capacity, from a variety of causes, is 23%, with roughly 8% of the reduction due to DC to AC conversion. Furthermore, solar systems that feed directly into a DC storage system don’t require net metering, which has come under attack as solar installations have grown.

So, if much of our consumption requires DC power and distributed generation technologies generate DC, why should we lose so much energy by converting the current to AC and then back to DC? What if we turned the system around, inverting only where AC is required instead of DC? From an energy standpoint, that may be the future.

At the Devil’s Thumb Ranch, an eco-resort in the mountains of Colorado, Schneider Electric teamed up with advanced energy engineering firm PosEn to transform almost 200,000 square feet of buildings from standard AC to a DC microgrid system with lithium-ion battery storage and intelligent controls, along with distributed generation.

At a new barn and veterinary facility built to use only DC power, the system powers a well pump, motors, lighting, and trough heaters in a harsh environment (it gets down to -40 degrees F).  The power consumption of the facility was originally designed for about 10kW of AC – but that dropped to just 3.2kW utilizing locally generated DC power, sophisticated energy management, and energy storage.

There are other advantages to low voltage DC as well. Take the laptop power cord.  If you were to cut the cord and grab the wires on the AC side of the adapter, you would get a nasty shock. You would also create a fire danger. But on the DC side, cutting the cord would not cause a fire, and the shock would be much less. (Still, don’t try this at home). Wider utilization of low voltage DC would also make electrical work safer and easier. The National Electric Code (NEC), that is the standard across the country requires a licensed electrician to do work involving AC power – but low voltage DC can be done safely by a knowledgeable layperson, reducing construction and remodeling costs.

Or take local distribution lines. Those wires that run from pole to pole are expensive to maintain and are exposed to the risk of falling tree limbs in storms, but the cost of putting them under ground is prohibitive. Low voltage DC lines can be undergrounded for much lower cost – giving the community a highly resilient distribution system without unsightly wires.

With all of these benefits of DC in a changing technology landscape where on-site DC generation and DC-powered devices are both growing in popularity, we could see a return to the current wars – and this time, Edison just may win. 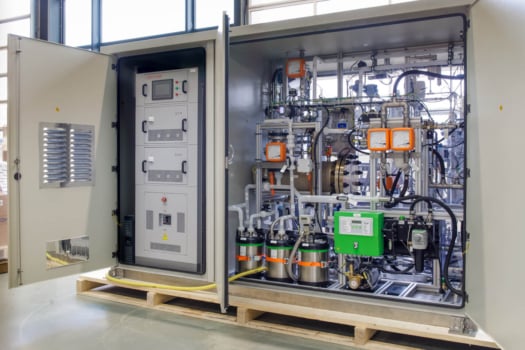